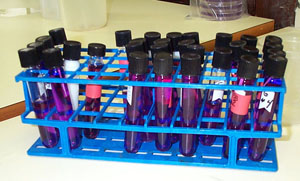 Lactic acid bacteria are a group of related bacteria that produce lactic acid as a result of carbohydrate fermentation. These microbes are broadly used by us in the production of fermented food products, such as yogurt (Streptococcus spp. and Lactobacillus spp.), cheeses (Lactococcus spp.), sauerkraut (Leuconostoc spp.) and sausage.

These organisms are heterotrophic and generally have complex nutritional requirements because they lack many biosynthetic capabilities. Most species have multiple requirements for amino acids and vitamins. Because of this, lactic acid bacteria are generally abundant only in communities where these requirements can be provided. They are often associated with animal oral cavities and intestines (eg. Enterococcus faecalis), plant leaves (Lactobacillus, Leuconostoc) as well as decaying plant or animal matter such as rotting vegetables, fecal matter, compost, etc.

Lactic acid bacteria are used in the food industry for several reasons. Their growth lowers both the carbohydrate content of the foods that they ferment, and the pH due to lactic acid production. It is this acidification process which is one of the most desirable side-effects of their growth. The pH may drop to as low as 4.0, low enough to inhibit the growth of most other microorganisms including the most common human pathogens, thus allowing these foods prolonged shelf life. The acidity also changes the texture of the foods due to precipitation of some proteins, and the biochemical conversions involved in growth to enhance the flavor. The fermentation (and growth of the bacteria) is self-limiting due to the sensitivity of lactic acid bacteria to such acidic pH.

Back to Top Exercise

In this exercise, we will do enrichments for lactic acid bacteria from enriched samples (like yogurt, sauerkraut, decaying plant matter, tooth plaque). You will be monitoring three parameters: growth (as determined by culture turbidity), culture diversity (as determine by microscopy), and pH. If time permits, you might attempt to isolate some of these bacteria using the streak-plate method.

Back to Top Procedure

Cap the tubes snugly and incubate them all at 37 degrees C for 24 hours (or until there is evidence of growth, usually for 48 hours).


Note: Dental plaque is actually a composite material made of microorganisms and their exopolysaccharide (EPS) layers. In experiments using artificial tooth surfaces, species of Streptococcus and Lactobacillus are usually the first microorganisms to colonize. Other types of microorganisms are known to become members of the plaque community by adhering to these first colonizers and/or their EPS layers.

The samples (inocula) you use to inoculate the sterile media will have many types of microbes in them. Trypticase soy broth (TSB) contains an enzymatic digest of soybean, and is thus quite rich in nutrients required by lactic acid bacteria. It also contains glucose, a fermentable substrate. To inhibit the growth of other types of microorganisms, the tubs will be filled to the top and capped to exclude air. Many of the organisms in the inoculum will only grow if air is present, while lactic acid-producers do not use oxygen. Additionally, the initial growth of lactic acid-producers lowers the pH enough to prevent the growth of most other microorganisms. In this way, these specialists carve out a niche for themselves.

Back to Top Materials (Recommended Vendors)

* Trypticase soy broth is sold as a powder by many biological supply companies such as Fisher Scientific, Ward's or Carolina Biological. Mix as directed on container, pour into screw cap tubes to within a half-inch of the top. Also autoclave some extra media in a flask or covered beaker. Leave caps somewhat loose during autoclaving. Place tubes in an inch or so of water in a tray in autoclave. Autoclave for 15 minutes on slow exhaust. If lots of liquid is lost from each tube, fill with sterile media from extra flask. Tighten caps on tubes once media has cooled.

** Brom-cresol purple is a pH indicating dye which is purple when in the free acid form at pH 6.8 and yellow in the protonated form at pH 5.2. Colonies producing lots of lactic acid change the pH of the broth and cause the broth to turn from purple to yellow.

*** Trypticase soy agar plates are made by making TSB and adding 15 grams per liter of agar. Also add .015 grams brom-cresol purple per liter. This is then sterilized for 20 minutes in an autoclave on slow exhaust, and poured into sterile petri plates using aseptic technique. One liter of media should yield about 40 plates.