The Plate Boundary Fault of the 2011 Tohoku Earthquake: Oceanic Provenance and Earthquake Genesis

This is one component of the Seismogenic zone Experiment Mini Lessons

This mini lesson provides an example of how stratigraphy influences tectonics, and vice versa. The magnitude 9 Tohoku earthquake slipped a record 50m along a plate boundary fault comprised of extraordinarily weak smectite-rich pelagic clay [Chester et al., 2013; Ujiie et al., 2013, Fulton et al., 2013]. This clay may also have served as a slip surface for numerous large tsunami and tsunamigenic earthquakes along the subduction zone to the northeast, but it facilitated none along the Japan and Izu-Bonin Trenches to the south. During this lesson students will discover the probable reasons for this dichotomy.

Students will be supplied with locations of the Tohoku earthquake ocean drilling site (C0019) and the reference Site (436) as they are back tracked through Pacific Plate motions to their locations of origin. Students will construct the vertical sedimentary sequence that would occur, using Walther's Law (Prothero and Schwab, 1996, p. 329-330).

The student-reconstructed vertical sequence of sedimentary deposits will be compared to that at IODP Site 436. Site 436 includes a conspicuous interval of pelagic clay and is the oceanic reference site for Site C0019 drilled during Exp. 343. Students will compare the vertical succession of sediment lithologies hypothetically accumulated in their backtracked site to those observed at Sites 436, C0019 and others on the oceanic plate incoming to the subduction zone. Students will learn that smooth seafloor correlates with continuity of the pelagic clay layer, whereas, areas of rough seafloor (containing seamounts capped with carbonate and siliceous pelagic sediments) correlate with discontinuity of the pelagic clay layer. They will also learn that large earthquakes and tsunamis occur only in areas of more continuous incoming pelagic clay. Students will be able to speculate on the role of seamounts in interruption of the propagation of seismic slip (e.g. Wang and Bilek, 2011, 2014).

As outlined here, this mini lesson is directed to a sedimentation-stratigraphy course for upper division students; this exercise also could be incorporated into a tectonics course. The lesson can range from 2 to 5 hours, depending on how much is presented to the students versus letting them work together and discover. 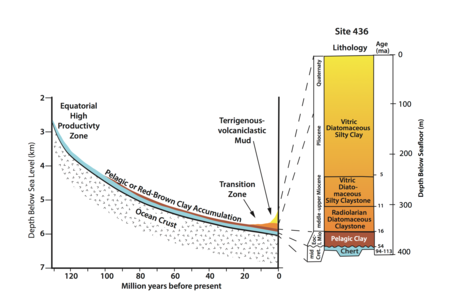 ×
Figure 3. Lithology of Site 436 with associated subsidence curve for North Pacific Oceanic Crust. The types of sediments that would be accumulating on the subsiding ocean foor are noted with their correlations to the deposits at Site 436 (Courtesy of Casey Moore).

Provenance: (James) Casey Moore, University of California-Santa Cruz
Reuse: This item is offered under a Creative Commons Attribution-NonCommercial-ShareAlike license http://creativecommons.org/licenses/by-nc-sa/3.0/ You may reuse this item for non-commercial purposes as long as you provide attribution and offer any derivative works under a similar license.
Expansion of this exercise could encompass more aspects of tectonics, stratigraphy, and structural geology. Extension of this exercise could continue over several days in class or through several lab sessions and might include one or more of the following: 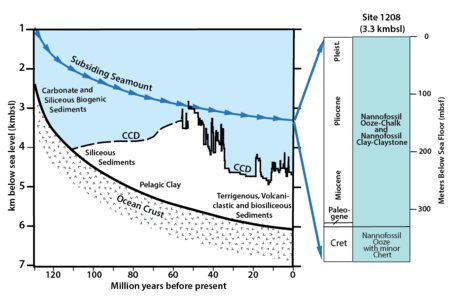 ×
Figure 4. Subsidence curve for a seamount that stays above the CCD and accumulates a thick sequence of carbonate. A contrast to Site 436 that subsides below the CCD early in its history. (Courtesy of Casey Moore)

1) Faculty will lead a discussion to help the students understand the distribution of deep sea sediment (Figure 1), given water depth, latitude, and proximity to continents. They will learn that: a) biosiliceous and calcareous deposits occur near the equator, b) red-brown pelagic clay comprises the center of the modern Northern Pacific Ocean, c) biosiliceous sediments occur along continental margins, and d) terrigenous and volcaniclastic sediments are deposited near continental margins and island arcs. For background see (Jenkyns, 1986)

We include a copy of the map in which the legend is modified so the students have to make connections between the names on the legend and the variously colored masses of sediment (Figure 2) ( see Assessment 1). Note that this map only covers the deep water sediments and excludes seamounts and oceanic plateaus that would be above the calcite compensation depth and accumulate carbonate-rich sediments. The sediment distribution map is for the Holocene and we are applying it back as far as the Early Cretaceous. 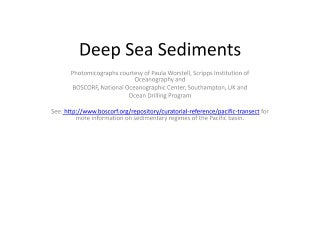 2) Once students have the sediment types correctly identified on the map they can move Site 436 from its location of origin to where it is today. The backtracking, or determining the previous locations of drill sites, was done in 10 Ma increments using the rotational poles of Doubrovine et al. (2012). Students should note the time that the site resides in each sedimentary environment. Using the following sedimentation rates they can estimate the amount of each sediment type that would accumulate during the > 120 Ma transport of the site through the various oceanic depositional environments. Using the recommended sedimentation rates students can create a model stratigraphic section they can compare to the recovered section at Site 436 (Figure 3).

4) Using the above information students discover that modeled Site 436 accumulates: ~200 m equatorial deposits, ~ 42.5 m of pelagic clay and ~ 300 m transitional and terrigenous deposits. This is a global scale illustration of Walther's Law. Note that the 200 m of presumed equatorial deposits in only partially sampled by Site 436.

This modeled thickness of Site 436 correlates well to the actual section (Figure 3). Note the inclusion of the stratigraphic section from Site 436 in the regional stratigraphic correlation diagram. Compare to the fence diagram of multiple sections cored by ocean drilling in the NW Pacific offshore of the Tohoku earthquake region.

Figure 4 provides a basis for modeling the accumulation of sediments on seamounts or oceanic plateaus. Subsidence curves for seamounts can be plotted on the diagram and sediment accumulations visualized in terms of time spent above and below the calcite compensation depth. 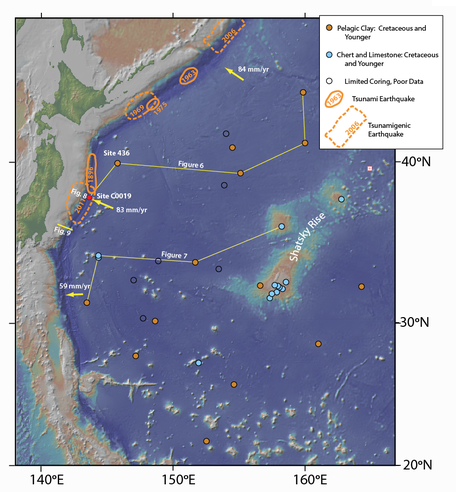 6) Instructors lead discussion of observations in (5): A) The incoming seafloor with continuous layers of pelagic clay correlates with subduction zones with large tsunamis (Figure 5). B) Trenches with incoming seamounts and without continuous layers of pelagic clay do not have large earthquakes nor tsunamis. Speculation: seamounts may be important in limiting the progress of tsunamigenic slip on the subduction thrust [Wang and Bilek, 2011].

7) Regional Aspects of Sediment Deposition in the NW Pacific Ocean: Once students are comfortable with the origin of the various stratigraphic units at Site 436, they can look at the broader implications of the process of accumulation of pelagic clay in the NW Pacific.Students should examine the regional map of drilling sites in the NW Pacific (Figure 5) and the two fence diagrams drawn through the area NE and SE of the location of the Tohoku Earthquake. The students should note that the pelagic clay layer appears to be continuous NE of the Tohoku earthquake locality but interrupted by seamounts with dominantly carbonate and siliceous biogenic sediments to the SE.

Apparently the pelagic clay enables large magnitude slip on subduction thrusts at shallow depths with the production of tsunamis .

Conversely when the continuity of the pelagic clay is interrupted by seamounts covered with carbonate, failure occurs in a more localized fashion without extensive areas of shallow slip and tsunami production (Wang and Bileck 2011, 2014; Mochizuki et al.,1008).

Figures 8 and 9 show conceptual cross sections of 1) the Tohoku Earthquake where the pelagic clay localizes the failure surface over a large distance; and 2) an earthquake just south of the Tohoku rupture zone where a seamount has been associated with a repeating M7 earthquakes that have not produced significant tsunamis (Mochizuki et al.,1008). This example suggests that seamounts interrupt the continuity of the pelagic clay layer and also foster more localized failures that incrementally release strain accumulation. 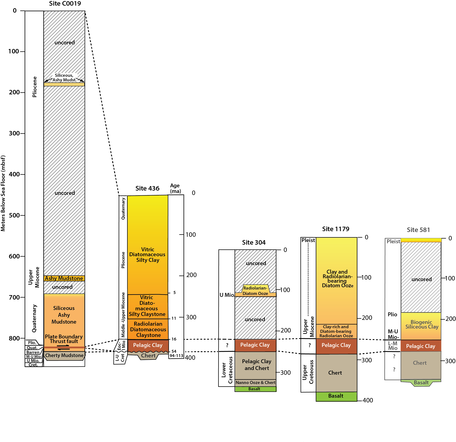 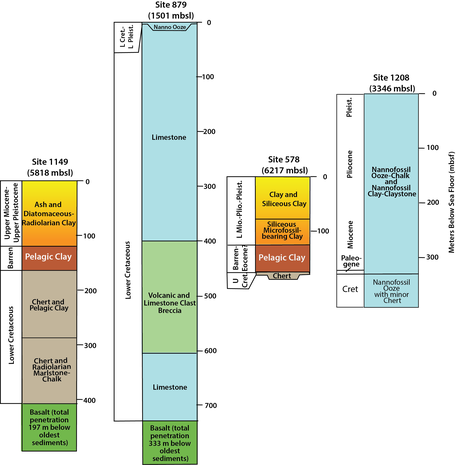 ×
Figure 7. Fence Diagram showing stratigraphy of sites both from the deep sea floor (with pelagic clay) and seamounts (dominated by carbonate, pelagic clay absent). Note roughness of seafloor due to abundance of seamounts (see Figure 5) (Courtesy of Casey Moore).

2) Additional questions/discussion issues for students: a) How can you use modern sediment distribution to infer sediment accumulation in the Cretaceous? Answer: The assumption is that the oceanic sediment distribution was similar during the Cretaceous and younger times, because sedimentary facies are largely controlled by their position with respect to the rotational axis of the earth. The Pacific was wider in the Mesozoic and Paleogene, but its north-south geometry and relationship to the rotational axis of the earth is presumed to be similar to today. b) What about compaction? The rates given above are for surface sediment accumulation and the thickness would be reduced substantially during consolidation. For example, the pelagic clay section could substantially decrease in thickness when it is buried 300 mbsf.

4) What is Walther's Law (MAYBE MAKE A LINK TO A STRATIGRAPHY BOOK IMAGE OF WALTHER'S LAW.

×
Figure 8. During the Tohoku Earthquake, the enormous slip near the trench was facilitated by the weak pelagic clay. Slip was able to propagate over horsts and through grabens. We presume that this slip model applies to the earthquakes that have produced large tsunamies along the subduction zone NE of the Tohoku area (Courtesy of Casey Moore).

Skip to search results Skip to pagination
There are no instructor stories currently available for this mini-lesson.

If you have used this mini-lesson in your course, you can submit your instructor story to help others adopt and adapt this material. Want to discuss GeoPRISMS/MARGINS mini-lessons further with other educators? Join the Community.


Exam question dealing with the general application of Walther's Law in the open ocean setting: