Provenance: Grinnell College
Reuse: This item is offered under a Creative Commons Attribution-NonCommercial-ShareAlike license http://creativecommons.org/licenses/by-nc-sa/3.0/ You may reuse this item for non-commercial purposes as long as you provide attribution and offer any derivative works under a similar license.
Increasing Persistence of All Students in STEM

The Grinnell Science Project (GSP), initiated in 1992, was developed to support domestic students of color, first-generation students, and other students from groups underrepresented in the sciences. Previous analyses had shown that students from these groups were at increased risk of poor academic performance in introductory science courses and lack of persistence in science. We learned that risk factors for low grades in introductory math and science courses were not low high school grades or standardized exam scores, but included being a first-generation college student, graduating from a high school where fewer than half the students enrolled in a four-year college, or being a domestic student of color. In addition, while women outperformed men in introductory math and physical science courses, disproportionately few women pursued majors in these fields. The GSP includes a pre-orientation program aimed at building community, pedagogical changes in introductory science and mathematics courses, the Science Learning Center, which supports peer mentoring and tutoring, and early opportunities for engaging in research. Over the past twenty years, there has been a remarkable increase in the number of domestic students of color graduating with STEM degrees, presumably as a result of the changes that have been made.

Nearly all science faculty members have participated in some aspect of these efforts, and leadership has involved a broad range of individuals, stemming from intentional comprehensive ownership and faculty development. 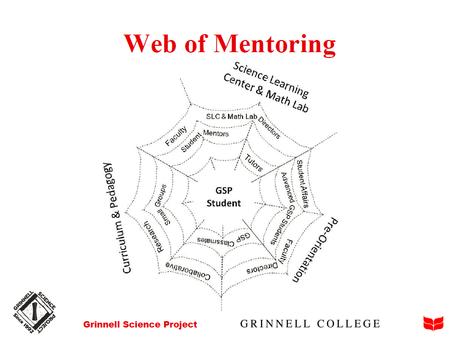 ×
A primary tool for accomplishing the goals of the GSP was weaving a web of mentoring (Acrobat (PDF) 229kB Jul28 15), not only close mentoring of students by their teachers, but also student-to-student and faculty-to-faculty. Curricular and pedagogical changes are both substantial and nearly universal. The GSP was also greatly influential in the design of new science facilities at Grinnell College. While the initial impetuous for the effort came from some key individuals, the execution and continuous improvement lies within virtually all science faculty. This high level of involvement, including curricular development, community building activities, and mentoring, insures sustainability.

Direct activities aimed at students include:

By promoting student achievement and excellence in teaching and learning, the Grinnell Science Project addresses the issue of increasing the diversity of the STEM workforce, using a range of activities all of which are rooted in intensive mentoring and building a community of scientists (students and faculty alike) that supports persistence in science through and after graduation:

Despite the effectiveness of efforts associated with the Grinnell Science Project that are largely focused on introductory-level students, there are indications that the second-year experience in the sciences is particularly challenging. Previous work (Gansemer-Tofp, Stern, and Benjamin, 2007) showed that Grinnell students face significant challenges in their second year, including increased rigor in their coursework, less engagement with support structures emphasized in the first year, increasing demands of extra-curricular activities, and making decisions such as declaring a major and applying for off-campus study. Some faculty teaching in 200-level science courses observed that this seemed to be a stressful time for some of their students, in a way that could affect persistence in STEM majors. This led to analysis of registration and transcript information of students who registered for intermediate (200)-level sciences courses but did not complete them with a grade of C or better. Data revealed underperformance by students of color (Black, Latina/o, Asian, Native American, and Multi-ethnic) and first-generation students relative to students not in those groups enrolled in 200-level (intermediate) science courses. This gap was of particular concern in Biology 251 (Molecules, Cells, and Organisms) and Chemistry 221 (Organic Chemistry), intermediate-level biology and chemistry courses that serve as gateway courses to biology, chemistry, and biological chemistry majors as well as pre-health students. Programming designed largely to enhance students' sense of belonging and provide supportive structures to make pathways to success in STEM more visible to students has apparently narrowed the gap, such that rates of successful completion of gateway courses for students of color and first-generation students are closer to other students than before the implementation of these efforts.

Programming elements implemented to support inclusive excellence included for second-year students included faculty development, pedagogical reform of some 200-level courses, and increased opportunities and support for second-year students. Faculty development efforts included support for curricular reform, including coordination between faculty teaching 200-level Biology and Chemistry gateway courses. Faculty also attended seminars, workshops, and lunches to learn about and discuss experiences and readings related to specific topics known to affect inclusion and persistence in the sciences such as understanding meta-cognition, implicit bias, managing effective group work, and active learning. To increase student support, staffing for the Science Learning Center was increased, research and job opportunities for targeted groups of students were made available, and funding was provided for students to attend and present at meetings dedicated to increase participation of students from groups traditionally underrepresented in the sciences, such as annual meetings for the Society for Advancement of Chicanos/Hispanics and Native Americans in Science (SACNAS), Grace Hopper Celebration of Women in Computing, and the Annual Biomedical Research Conference for Minority Students.

Perhaps the most significant programming effort to provide increased support for students was the implementation of a second-year science retreat.

All second-year students enrolled in a science course appropriate for a pathway to a major in the sciences are invited to participate in a day-long retreat. The retreat is held on a Saturday, early in the fall term. Programming of the retreat is focused on helping students identify and meet challenges of second-year science students and includes activities facilitated by faculty, staff, upper-level students, and alumni. Activities were designed to help students to navigate the curriculum, manage their workload, prepare for research, explore majors and career options, and build a sense of being part of a supportive community within the sciences at Grinnell. About half of the invited students students participated, and on an evaluation survey, over 80% said they would encourage others to attend and agreed that the retreat helped them feel better prepared for the academic challenges they are facing in their second year, helped them develop a clearer sense of their goals, helped them develop a clearer sense of how their Grinnell education can help them pursue their life goals, helped them better understand the opportunities and resources available, and enhanced their sense of belonging in the sciences at Grinnell. Student feedback has helped the programming to evolve, particularly focusing upon interactions with faculty members. Due to the value students placed on informal interactions with faculty during the retreat, a regular lunch series for students to dine informally with faculty teaching the 200-level biology and chemistry courses has been implemented.

Assessment in order to better understand the challenges faced by second year STEM students and to better support them and encourage them to persist and excel included:

Gansemer-Topf, AM, Stern, J, &amp; Benjamin, M. Examining the Experiences of Second-Year Students at a Private Liberal Arts College. In: Tobolowsky, BF and Cox, BE, editors. Shedding light on sophomores: An exploration of the second college year (Monograph No. 47). Columbia, SC: University of South Carolina, National Resource Center for the First-Year Experience and Students in Transition; 2007. p. 31&acirc;&#128;&#147;48

Abstract: Over the course of the past decade, faculty members of both the biology and chemistry departments of Grinnell College have been intentionally building connections between the organic chemistry and biology courses students take. A majority (&gt;80%) of students enrolled in organic chemistry are also co-enrolled in a 200 level biology course called Molecules, Cells, and Organisms during their second year. In attempting to showcase the interdisciplinary nature of these sciences we have developed a number of shared resources, problem sets, conceptual modules, and exam questions that are appropriate for use in both the Organic Chemistry and Molecules, Cells, and Organisms courses. Many of the activities are specifically directed at helping students develop skills that enable them to address complex problems requiring multi-disciplinary approaches, and working in a community. We will discuss how we have designed, coordinated, and evaluated the enhancements to the curriculum we have implemented in the last ten years. In particular, we will discuss how we have developed and continue to maintain interdepartmental collaborations to make these activities possible.