Spelman College is committed to providing its students, women of African descent, with the opportunity to study, research and excel in the sciences. The Howard Hughes Medical Institute has been instrumental in assisting the college in reaching these goals by providing support for the development of an interdisciplinary academic and research experience that develops and prepares students to be innovators and global leaders in science. Continuous HHMI funding since 1991 has allowed the college to transform its biology program and significantly enhance the research culture in the sciences. This has been accomplished through a variety of initiatives and activities including undergraduate research training, curricular development, new faculty and staff hires in the biology department and in science education, along with improvements in teaching and research resources.

The impact of these HHMI initiatives in the 1990s was extensive as the significant numbers of students and faculty supported and the infrastructure it provided served as leverage for the college to bring in funding for programs such as the NASA Model Institutions for Excellence Program and the NIH Minority Biomedical Research Support (MBRS) Program. The success of these programs in building a strong research infrastructure, enhancing the science curriculum, and increasing the numbers of graduates in the STEM disciplines obtaining advanced degrees by over 50%, made it possible for the college to raise money for a $35 million Science Center that opened in 2000. Further evidence of the college's success in producing well-prepared graduates is Spelman's current ranking of fourth in the country in the baccalaureate origin of African American doctoral degrees in STEM fields.

More recent HHMI awards have moved STEM education even further into the 21st century by preparing undergraduates to be leaders in science research and medicine as well as encouraging students to be scientifically curious and literate leaders in society. Student scientific curiosity is cultivated through a variety of activities and curricular innovations introduced through a complete restructuring of the biology curriculum, the use of state-of-the-art instructional technology, the introduction of interdisciplinarity in research and lecture courses, faculty-mentored research opportunities offered across a wide variety of disciplines both on and off campus, and providing students the opportunity to work independently as scholars through student-generated grant awards and team-based research competitions.

Increasing Persistence of All Students in STEM

More about this theme While Spelman has maintained a strong presence for many years in producing graduates who have gone into the health professions, the college made a concerted effort beginning in the 1990s to increase the numbers of students pursuing graduate degrees in the STEM disciplines. Many of the initiatives established at this time were focused on introducing high school and pre-freshman students to the sciences through their participation in summer science programs and through outreach and mentoring opportunities during the academic year. One of the factors found to be most influential with students persisting as science majors in college and their pursuit of a health professional or graduate school degree is the opportunity for them to interact with scientists and professionals who have been successful in obtaining post-graduate degrees and are active in their fields. In particular, students were and are inspired by professional women of color who have successfully attained goals similar to their own. A number of programs have been introduced over the years that have promoted and supported activities that introduce students to STEM majors and careers while also promoting persistence in completing a science degree. These initiatives have included a high school protégé-science mentorship program, on-campus summer science programs, a video highlighting successful STEM graduates, a summer research program pairing trainees with African American women mentors, and an academic year colloquia series. 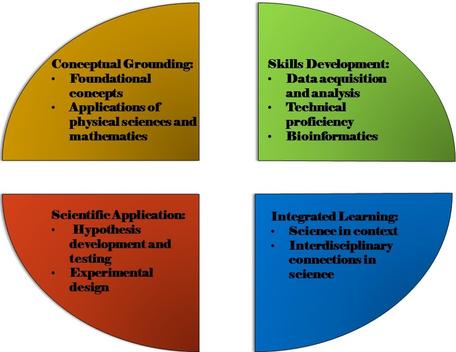 Provenance: Renee Leonard, Spelman College
Reuse: This item is offered under a Creative Commons Attribution-NonCommercial-ShareAlike license http://creativecommons.org/licenses/by-nc-sa/3.0/ You may reuse this item for non-commercial purposes as long as you provide attribution and offer any derivative works under a similar license.
More about this theme Since its inception, the Spelman HHMI Program has supported summer and academic year research programs, initially with biology faculty mentors and, since 2008, branching into other STEM departments. In addition, the program has supported a redesign of the biology curriculum, which now incorporates research-based courses that focus on faculty-mentored research projects. Based on the college's initiative of having all students complete a research experience by graduation, students are starting to be introduced to research early in the curriculum. For example, chemistry and biochemistry majors attend research-focused seminars, one in the fall of their first year (CHE 101 First Year Seminar in Chemistry) and in the sophomore year (SYE 103/104 Sophomore Seminar: Chemistry) that include developmental activities aimed at professional and research preparation. Students interested in performing research on campus are also invited to participate in an annual Research Open House where they meet with research-active faculty and tour labs. Student research trainees over the years have had the opportunity to work with researchers on campus and at local area institutions through the Spelman Mentored and Research Trained (SMART) Scholars Program, with students participating in a focused multi-year development program, and the Research Associates Program (RAP), where students are supported in their research during an academic year. The program has also supported a Summer Visiting Research Fellows Program where students have worked under the mentorship of African American women scientists at research-intensive institutions and national labs. All HHMI-supported research trainees present their research project findings during the annual college Research Day, and many are supported in traveling to present at national conferences. More recently, the program has supported a competitive student-developed research grant initiative. Students who have had previous research training are encouraged and guided in writing an NIH-style grant based on their own research ideas, with two grants being funded annually.

More about this themeThe HHMI Program has continually supported curricular changes in biology and other STEM disciplines that have focused on bringing interdisciplinarity to both introductory and more advanced courses. Building on the success of earlier HHMI initiatives that supported the development of cross-disciplinary Cognate Linkage Modules, a growing number of STEM faculty have been supported in their development of interdisciplinary modules, case studies, and projects that focus on problem-solving and critical thinking by integrating knowledge from various disciplines and linking multiple courses across the STEM disciplines. Faculty have also received travel funds to attend curriculum workshops focused on introducing interdisciplinarity into the curriculum and have presented their work at national conferences. In order to promote these efforts over the years, the program has supported the hiring of faculty positions in biology and in science education. While students enrolled in various STEM courses benefit from these efforts, the HHMI Program also has encouraged integrating learning and innovation through an interdisciplinary research-based initiative called the Spelman Pioneer Award in Research Competition (SPARC), which is an annual competition where interdisciplinary teams of students vie for a top prize awarded to the most viable outcome to a proposed problem over a given academic year. 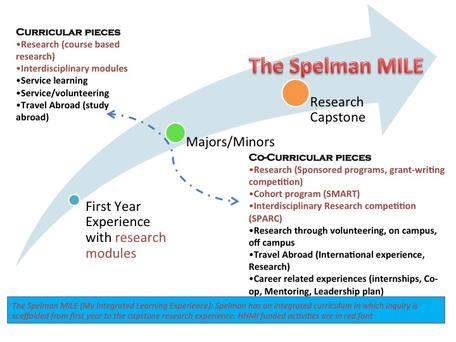 Provenance: Spelman College faculty
Reuse: This item is offered under a Creative Commons Attribution-NonCommercial-ShareAlike license http://creativecommons.org/licenses/by-nc-sa/3.0/ You may reuse this item for non-commercial purposes as long as you provide attribution and offer any derivative works under a similar license.
The biology department launched a broadscale curriculum reform in 2006. This skills-based curriculum laid the foundation for developing core competencies through its four semester-long introductory core, using student-centered active learning pedagogies in all classes. Next, the department focused on introducing authentic research experiences in courses. Since 2009, over a dozen courses with authentic research have been developed. This has resulted in a complete transformation in the learning experience of students. Whereas only 30–40% of students used to leave with an authentic research experience, now almost 80% of the students graduate with a research experience. This model has served as an example for other departments to incorporate inquiry-based pedagogies and course-based research experiences. Due, in part, to the success of the biology department curriculum, Spelman now has instituted an Undergraduate Research Capstone program, which will require all Spelman students to have a research experience before graduation.

The HHMI program at Spelman has taken care to incorporate interdisciplinarity in the curriculum to promote student development. Collaborations between faculty members in STEM departments are vital to creating a coherent science learning environment to foster students' holistic thinking. In the past, faculty from different departments have collaborated to teach "Linkage Modules" that link the same concept in different science courses (for example, biology and physics). This is in keeping with Spelman College's emphasis on an integrated curriculum—"My Integrated Learning Experience (MILE)"—that provides a curricular framework for students to answer real-world questions associated with interdisciplinary perspectives. Currently, there are several interdisciplinary majors on campus (e.g., women's studies, international studies). However, with the exception of environmental science and studies program and the newly instituted health sciences major, interdisciplinary science programs are rare. The current HHMI program at Spelman attempts to make interdisciplinary scientific thinking a part of the student's toolkit at the earliest stage by developing introductory interdisciplinary science course under the guidance of a new interdisciplinary hire.