Who are the Capstone Institutions?

In 2012, the Howard Hughes Medical Institute (HHMI) awarded $50 million in grants to forty-seven small colleges and universities. In a press release issued May 24, 2012, leaders of HHMI recognized these predominantly undergraduate institutions as incubators of new ideas and models that might be replicated by other institutions to improve how science is taught in college. Awards to eleven of the institutions that have been long-term recipients of HHMI funding with mature and successful programs were designated as "Capstone Awards."

Capstone Institutions include three historically black colleges and universities (Morehouse, Spelman, and Xavier) and five single-sex colleges (one men's college, Morehouse, and four women's colleges—Barnard, Bryn Mawr, Smith, and Spelman). Capstones are situated in locales ranging from large cities (Barnard, CUNY Hunter, Morehouse, Spelman, and Xavier) to suburbia (Bryn Mawr, Hope, Smith, and Swarthmore) and the rural Midwest (Carleton, Grinnell). Hope and Xavier have strong religious affiliations with the Reformed Church in America and the Roman Catholic Church, respectively. Effects of local context are evident in variations in science education reform, possibly most remarkably by the reinvigoration of science teaching and research at Xavier during recovery efforts after the devastation of Hurricane Katrina in 2005.

How was the synthesis constructed?

HHMI charged Capstone Institutions with identifying key elements that led to success and engaging in a summative assessment of their programs. To meet this charge and associated goals of each institution, the Capstone Institutions have collaborated to compare program approaches, experiences, and activities to identify key strategies to improve and broaden access to undergraduate science education and to share our efforts in a way that is as accessible and as useful as possible to other schools seeking reform to broaden access. This web-based project facilitated by the Science Education Resource Center at Carleton College was developed through a collaborative process involving group and individual writing as well as structured discussion, synthesis, and review, in conference call and a two-day workshop attended by representatives of these institutions. 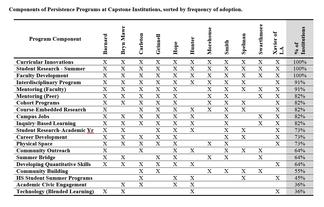 ×
This process revealed striking similarities in approaches taken by Capstone Institutions to improve science education. Providing institutional, curricular, and pedagogical changes to support persistence of students from groups traditionally underrepresented in STEM fields has been a priority for Capstone Institutions. Many efforts have been directed to support development of inquiry skills through research within and outside of coursework as well as efforts fostering integrative learning. Reform takes efforts at all levels of an institution. Topical pages in this site present this synthesis drawing out common strategies and linking to examples from the individual institutions.

Our overarching goal in producing this site is to support others aiming to adopt, adapt, or create similar programs, in an effort to improve higher education for all students. For more information on changes underway in higher education we recommend For Higher Ed: SERC's Portal to Resources for Faculty, Departments and Institutions.

The activity was funded by a combination of contributions from individual institutions and HHMI support from awards made to the Capstone Institutions under the Undergraduate and Graduate Science Education Program.

The ideas presented in this website are also discussed in an article authored by the leadership team.