Equilibrium, Stability, and Behavior over time 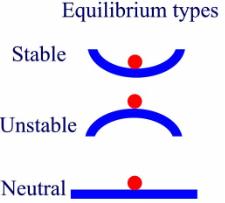 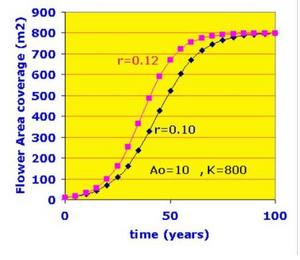 Behavior over time (temporal behavior) There are many situations where the static balance (equilibrium) of a system is of central interest: for example in studies of geologic structures, bridges, or buildings. Modeling such systems and thinking in terms of systems can be extremely helpful in our understanding of how different components of such systems are interconnected. However, for our discussion regarding system dynamics and systems thinking our primary focus will be to understand the temporal behavior of dynamic systems. Understanding a system's expected behavior over time is a primary objective of system modeling and system dynamics. The graph below is an example of S-shaped growth obtained for a system that obeys the logistic equation (see footnote to the page). The growth of the system starts out exponentially until it becomes so large that its growth is limited. This model describes flowers growing in a field of limited size (800 sq. meters). Many think that World population will follow this sort of growth. The point here is not this specific example but to emphasize the importance of understanding the expected behavior of a system over time. 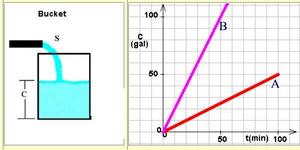 Linear Systems & Growth We refer to systems without loop structure or feedbacks as linear in that a cause has an effect, but the effect does not feedback and alter the cause. An example is a simple bucket filling with water. In reality someone will be watching the bucket fill and when it gets to the top they will turn off the faucet. This "feedback between water content and flow rate is a loop which would make the more realistic situation a non-linear system. The graph shows linear growth with two scenarios for filling the bucket with constant flow. Which line (A or B) corresponds to the greatest flow rate? From the graph, estimate this largest flow rate in gallons per minute. 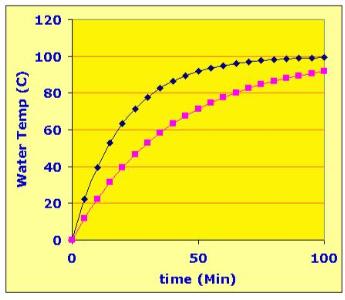 Time Delays Between Cause and Effect

Understanding the dynamic behavior of systems requires the realization that there may be a significant delay between cause and effect.

In the figure a graph is shown for two hypothetical containers of cold (0 °C)water set in a 100 °C oven.

Can you tell which container of water is largest?

Why or why not? 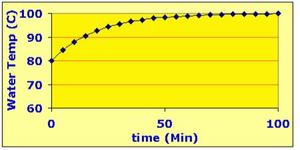 Perturbations are small changes that disturb a system from its equilibrium state.

There is an inherent time delay between the time the perturbation is applied and when the new state is achieved.

Assuming that the graph applies to the figure below, what happened to cause the change in temperature shown in the graph? 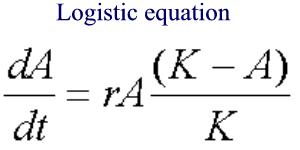 Here A is a variable (like area) and r and K are constants.