Age of the Dinosaurs

The public undeniably loves dinosaurs. Our students turn up in droves to watch movies like "Jurassic Park." So, many colleges and universities are offering introductory Earth history classes with dinosaurs in the course title: i.e. 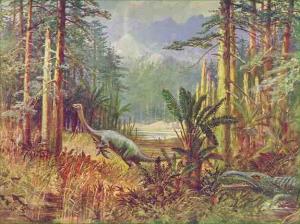 All of the above-listed courses and hundreds like them across the country are three credits, no prior science requirements, and many of them have labs. These courses have proven to be successful in drawing students into geology programs with declining enrollment (Montgomery, 2003 ) and also give non-science majors another chance to experience science.

There are a number of ways to make the most of this opportunity. Some of the issues in dinosaur paleontology bring together important topics from all over the sciences. For example, the debate over whether or not dinosaurs were homeothermic ("warm-blooded") includes:

Likewise, the K/T extinction controversy gets students interested in:

The nature of the evidence is probably the most important and useful subject to pursue in an "Age of Dinosaurs" class. Not only is the class a great setting to teach the basics of science, but developing critical thinking skills by focusing on evidence and argumentation is a great way to prepare our students for their responsibilities as jurors, voters, and decision-makers in general.

Below are web resources relevant to the specific subjects described on this page.