Challenges to Producers: Sustainability and &quot;Agriculture of the Middle&quot; in Globalized Food Systems

One of the characteristics of a globalized food system is that a smaller proportion of the population is needed to produce the large amounts of food for the global system. As a result, many analysts have noted shrinkage of the rural population in the rural United States over the last 100 years. Similar out-migrations from rural areas to cities have happened in Europe. Among other factors, this process has been hastened by the use of mechanization for agriculture (tractors, combine harvesters, mechanized crop processing, and transportation; we analyze the environmental impact of this in module 10.2). Mechanization and other factors mean that the cost of producing a bushel of corn, for example, and moving it into the global food system is cheaper when the scale of the farm and transportation infrastructure is larger. This phenomenon is referred to as economies of scale (recall also the example of dramatically scaled-up beef production in Greely, Colorado featured in the video of Module 1.2.) Farm producers in the United States and other industrialized economies thus often face pressures to grow their operations larger so that they can become more profitable, accentuated by competition against larger producers with lower prices, sometimes in other countries with lower labor prices.

These twin trends towards "get big or get out" and "get small for local markets" have left out a huge sector of farms that are mid-sized and that still generate a substantial amount of farm income in the U.S. economy, and utilizing the lion's share of cultivated soils (see figure 10.1.8 with pie-charts of earnings distributions different size farms in the United States). The analysis regarding this "Agriculture of the Middle" (Kirschenmann 2012) points out the threat posed to millions of farming households, most of whom produce for national and global commodity markets (e.g. soybeans, dairy). This analysis also points out that this sector of farms is vital as productive rural citizens that drive social organization, effective policy-making, and community values in most regions of the country. These mid-size farms are often leaders in the adoption of sustainable practices – especially when they are financially successful, illustrating potential linkages between financial and ecological sustainability. In any case, small and medium-sized farms have always played an important role in the maintenance of a rural landscape that most governments and citizens see as valuable. Agricultural landscapes and enterprises often contribute to the tourism value of a particular region, for example, the Pennsylvania Dutch region or wider presence of dairy farms in diverse, forested landscapes of Pennsylvania, or wine producing regions of California and New York State.

The role of "Agriculture of the Middle" in sustaining rural life according to this analysis is worth protecting, and advocates of this analysis and action to support mid-size farm enterprises point out a few advantages these farms have in interacting with regional farm systems. When effective linkages can be built to regional markets, these farms usually combine production at a medium to large scale (compared to small diversified farms supplying farmers' markets, say) with a flexible outlook that can allow them to change products and markets quickly, and best adopt sustainable production methods in a way that is visible to consumers and local communities (Kirschenmann 2012). As in the case of poverty traps for small farms discussed above, organizations that promote agriculture of the middle seek to clear barriers to these mid-sized producers. Note also that these "mid-sized" producers are enormous compared to farms in smallholder contexts throughout the developing world, though they are community members in an equivalent way to the role of smallholders in a rural third-world context). Mid-size producers and the food distribution organization that work with them may seek to promote "values-based food supply chains" where not just the commodity value of a food product is taken into account but also the value of a farm that demonstrates environmental sustainability and positive participation in rural communities. For example, many agricultural states now have state-level marketing efforts that promote state and regional agriculture, and these programs increasingly integrate ideas that help to promote mid-sized producers. Farmers, distribution network companies, and food markets have also banded together in different configurations to form networks that seek to support not only food availability for consumers but environmental, social, and economic sustainability along the entire food chain. Some examples of these are the Organic Valley dairy cooperative which now operates across the entire United States, the Red Tomato regional fruit and vegetable marketing effort in New England, U.S.A. (see Fig. 10.1.17 and 10.1.18), or the Country Natural Beef producers in the Northwest United States. 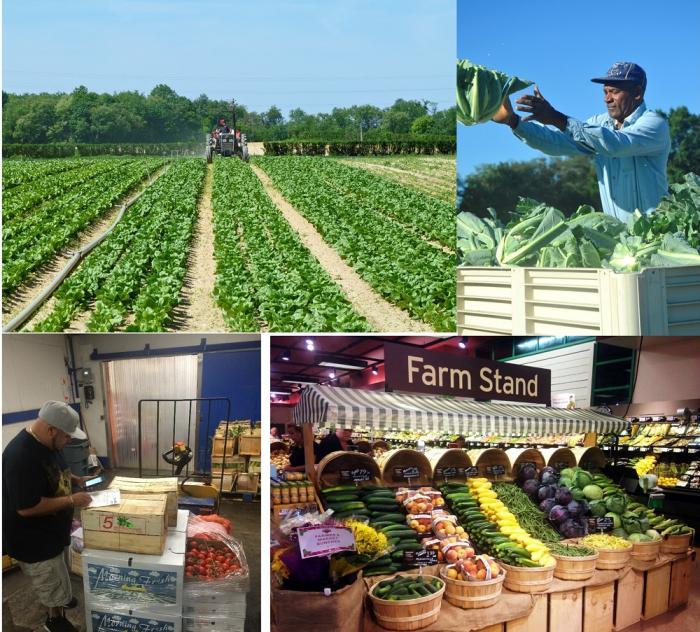 ×
Figure 10.1.17. Photos showing on-farm production, harvest, packing, distribution, and marketing from a &quot;values-based food chain&quot;. This example is from Red Tomato, a local/regional network linking farms to consumers in the states of Massachusetts, Connecticut, and Rhode Island in the United States.
Credit: Red Tomato Non-Profit and used with permission.

×
Figure 10.1.18. The Red Tomato Logo used in marketing the produce above.
Credit: Images courtesy of Red Tomato Non-Profit and used with permission.

You can view a PowerPoint slide set introducing nine case studies on values-based food supply chains like the ones described above:"Agriculture of the Middle", a research and education effort of the University of Wisconsin.

Integration into the Capstone Project

As you consider the food system of your capstone region, you may want to incorporate references to efforts that support either smallholder farmers in avoiding poverty traps or encourage continued participation of "Agriculture of the Middle" in the regional food system. The formative assessment for this module asks you to address whether you think there are concerns about poverty traps or agriculture of the middle in your capstone region. As you develop your capstone project final scenarios for sustainability, you may want to search on the internet for resources on regional food chains and food systems, as well as local farmers' markets and other initiatives, within your region of interest.