This step demonstrates the use of straight line method to separate baseflow from a streamflow hydrograph by using data for a single storm event. This step is developed for a storm event at Hall Creek in Indiana.

Baseflow is a portion of streamflow that is not directly generated from the excess rainfall during a storm event. In other words, this is the flow that would exist in the stream without the contribution of direct runoff from the rainfall. Estimation of baseflow and direct runoff is useful to understand the hydrology of a watershed, including interaction of surface and sub-surface water, role of urbanization on runoff generation and the health of aquatic habitat within a stream. The method presented here is applicable for a single peak hydrograph resulting from a single storm event. 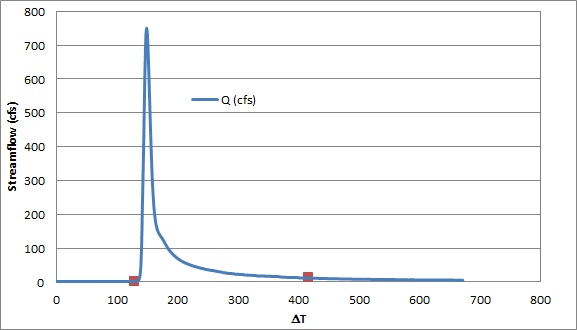 Once the beginning and ending of runoff are determined, create a third column in Excel for baseflow and populate it with values equal to streamflow until 8:15 AM on 09/25/2000. This means that all the discharge until this time is baseflow. Similarly, the baseflow is equal to streamflow after 8:00 AM 09/28/2000 until the end of the hydrograph. The values between 1.9 cfs (at 8:15 AM on 09/25/2000) and 12 cfs (at 8:00 AM on 09/28/2000) are then linearly interpolated to get the complete baseflow hydrrograph. Subtracting the baseflow column from the streamflow values will give you the direct runoff hydrograph as shown below. 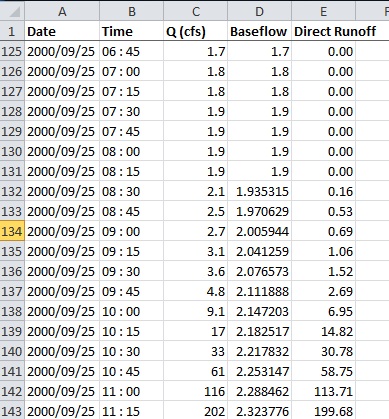 At the end of this step, you should have a baseflow time series and direct runoff hydrograph. The following figure shows the baseflow (red area) and the direct runoff (blue line) hydrographs on a single plot. 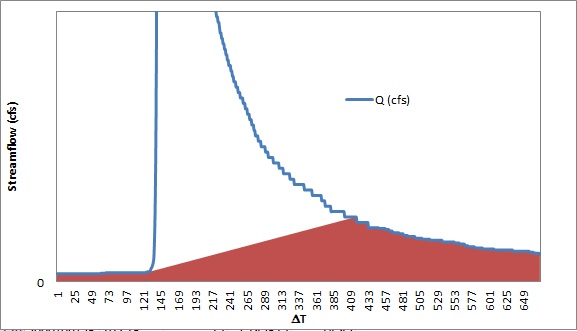