During a rainfall event, not all rainfall will become direct runoff or contribute to the streamflow at the watershed outlet. Some of the rainfall will be lost to interception by vegetation and to soil through infiltration. The loss due to evaporation and transpiration is either negligible or absent during an individual storm event. Therefore, in order to know how much rainfall is actually contributing to the direct runoff, we much subtract the losses or abstractions from the total rainfall. The hyetograph that we get after subtracting losses from the actual rainfall is called the excess rainfall hydrograph. In this exercise, we are going to see how to compute excess rainfall by assuming constant loss. As one can imagine, the loss may be varying during a rainfall event with relatively higher infiltration at the beginning of the storm event compared to the later stages when the soil reaches saturation. The constant loss method is the simplest method for computing excess rainfall. Another approach is by using the SCS curve number (CN) method, which is discussed in a separate step.

The rainfall hyetograph provided in the input data is shown below in an Excel sheet. 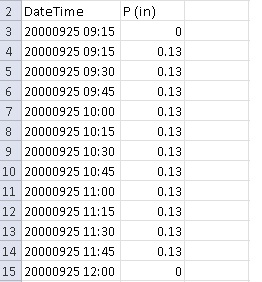 Excess rainfall is computed by subtracting losses from a rainfall hyetograph. In this case, we will assume a constant loss (or phi-index) of 0.272 inch/hr. This phi-index corresponds to a rainfall depth of 0.068 (approx. 0.07) for 15 mins. In the Excel sheet, create a new column for this constant loss of 0.07 as shown below. By typing 0.07 at the top of the column, clicking the bold bottom right corner of the cell, and dragging down over the desired cells, you can instantly populate them with the same value or formula: 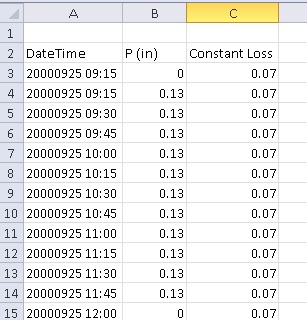 Create a new column next to constant loss called 'Excess Rainfall' in the first row of column D. Then use the formula Excess rainfall = observed rainfall - loss (column D= column B-column C) -- type an equal sign in a cell in column D and click the relevant cells in columns B and C, adding mathematical operation signs to make the cell input an expression as you would with a calculator. Then drag this cell (where you typed the expression) all the way down to populate the runoff column as shown below. Note that when the loss is greater than rainfall (first and last row), excess rainfall = 0. 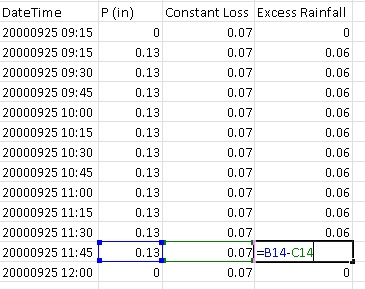 Column D will give you excess rainfall in inches.