This spreadsheet based step demonstrates the derivation of unit hydrograph by using the excess rainfall and direct runoff data from a single historical storm event.The intended audience for this step are upper level undergraduate or MS/PhD students interested in hydrology. The approach presented here should be applicable to any gauged watershed that has data for at least one storm event that satisfies the assumptions of the Unit Hydrograph theory. This step uses the data for Hall Creek in Indiana.

Unit hydrograph is a direct runoff hydrograph resulting from one unit (one inch or one cm) of constant intensity uniform rainfall occurring over the entire watershed. The concept of unit hydrograph is based on linear systems theory and follow the principles of superposition and proportionality. For example, if one inch of excess rainfall produces a direct runoff peak of 100 cfs then two inch of excess rainfall with produce a direct runoff of 2 x 100 = 200 cfs. Similarly if one inch of rainfall is followed by two inch of rainfall, the hydrographs from both rainfall pulses are simply added after accounting for the necessary time lag. The following figure demonstrates this concept. 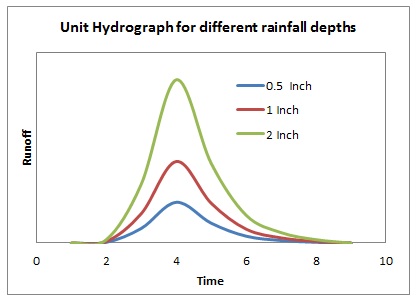 The data from Hall Creek, when opened in MS Excel, will look like the following: 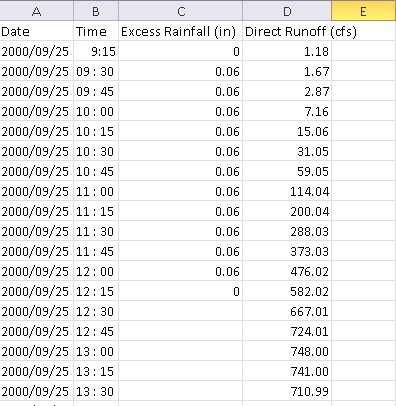 One of the key assumptions in the unit hydrograph theory is that the rainfall intensity is constant over the storm duration. However, it is difficult to find a natural storm event that satisfies this and some other assumptions of the unit hydrograph theory. The dataset provided here is representative of what you will generally get from a rainfall gauge.

As shown in the table, excess rainfall and the consequent direct runoff values are available at 15 minute intervals.

The first step is to compute the total volume of direct runoff. To do this, add all direct runoff values, and multiply the sum of all the direct runoff flows by the time interval (in seconds) of the series as shown below. (convert cubic feet per second to cubic feet of volume). After getting the total runoff volume, find the equivalent runoff depth by dividing the runoff volume by the basin area. Do not forget to use appropriate conversion factors in calculations to have uniformity in the units of various quantities involved. Note that, the depth thus calculated is equal to the total excess rainfall depth. 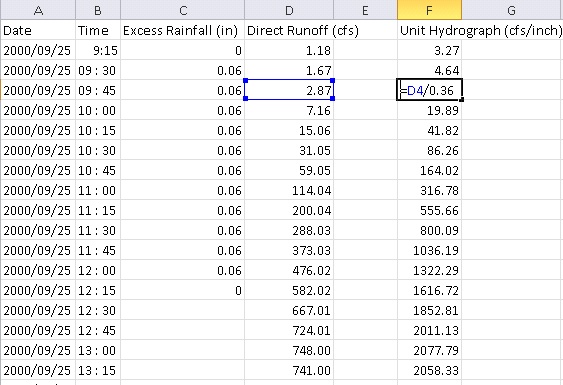 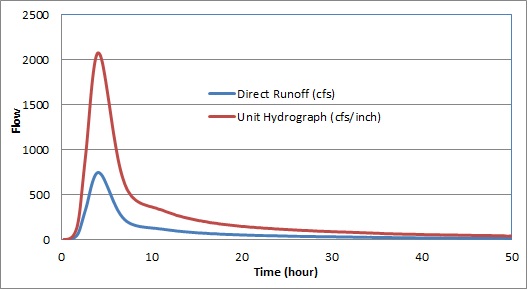