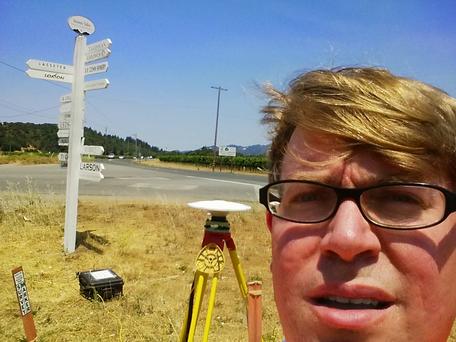 ×
Gareth Funning on fieldwork in northern California in July 2014, pictured with a GPS antenna and vineyards

Provenance: Gareth Funning, University of California-Riverside
Reuse: This item is offered under a Creative Commons Attribution-NonCommercial-ShareAlike license http://creativecommons.org/licenses/by-nc-sa/3.0/ You may reuse this item for non-commercial purposes as long as you provide attribution and offer any derivative works under a similar license.

The course introduces central concepts of solid earth geophysics as applied at the global or planetary scale.

One three-hour lab
per week

Show description of my course

The course introduces central concepts of solid Earth geophysics as applied at the global or planetary scale. We cover plate tectonics and dynamics of the lithosphere, seismology and Earth structure, geothermal behavior and heat flow, isostasy and gravity, and geodynamics and planetary geophysics. It is an upper-division class, and a core requirement of the geophysics major at UCR and a geology elective. It attracts approximately equal numbers of students from both majors.

The Global Geophysics class is targeted at upper-division students, and aims to teach the physics underpinning the behavior of the solid Earth, using a mixture of traditional lectures, problem-solving in discussions, and lab exercises that use real geophysical data. Although the GETSI material is somewhat more applied than the material I usually cover in this class, the format of the labs is similar, and I was able to transition into the module after we had lectures and labs on earthquakes and seismic waves.

Almost all of the students in the class were raised in California (the one exception being a student from Japan), and so the reflections on seismic hazards and potential societal consequences resonated strongly with them, providing a strong motivation from the start. The students were particularly adept at finding additional information on vulnerable infrastructure and went well beyond what was provided for them. Other elements, such as the LiDAR exercise in Unit 2 and the InSAR exercises in Units 3 and 4, were mostly successful, although additional time out of class was needed for the students to complete them. In general, this first test of the materials seemed a little rushed, and in future implementations I will devote more time, so that the students can get the most out of the exercises. Even so, most students were able to incorporate information and concepts from across the first four units, including earthquake interferogram models, into their Unit 5 assessments.

The students responded well to the challenge of identifying vulnerable infrastructural elements and developing plausible scenarios of damage and disruption, going far beyond my expectations. It was certainly an effective "hook!" They were also able to use the online tool developed for modeling earthquake interferograms, and did so for their final reports without issue.

I alternate between teaching this class and another upper-division class in active tectonics; the module would be a very good fit for the other class, and initially seemed a somewhat less good fit for this one (for example, the material is outside what is covered by the class textbook). The Global Geophysics class does include lab exercises where students work with real data (in keeping with GETSI), however, and there are lectures and labs that cover earthquakes and seismology, so it did not stand out as much as I had originally feared. I introduced the GETSI module immediately after we covered seismology in lecture, about 4 weeks into a 10-week class.

In order to tie the societal angle that is integral to GETSI into the more theoretical geophysics material covered previously in the class, I added a transitionary lecture where I described the effects that earthquakes can have on structures, which I think worked in making the transition less abrupt. I did not refer directly to the GETSI material later in the class, but I did use a format similar to the Unit 5 summative assessment for a second graded assignment later in the quarter, and I also asked questions in the final exam that drew on the GETSI module.

I took in the student responses to each unit and checked over them as formative assessments and an opportunity to give feedback. The Unit 5 assignment was used as a summative assessment for the whole module (and 20% of the final grade for the class). I also included questions in the final exam on material related to the class, including the relationship between earthquake recurrence and fault slip rate, how earthquakes can affect structures, and how the depiction of fault geomorphology in the movie San Andreas might not be accurate. The latter assessment seemed particularly popular with the students.

The aim of the module was to relate short-term and long-term tectonic processes (i.e. individual earthquakes to the growth of fault geomorphology), and to learn to interpret data from InSAR and LiDAR. In addition, we wanted students to reflect on the societal implications of earthquake hazards. Overall, I believe that we succeeded on both counts. Students who in many cases had not been aware of the applications of geodetic data were, in the space of two weeks, able to use the data to draw conclusions about faulting styles and earthquake hazards; they were also noticeably engaged in identifying the potential impacts of earthquakes on infrastructure and society in general.