This material supports the Imaging Active Tectonics GETSI Module. If you would like your students to have access to this material, we suggest you either point them at the Student Version which omits the framing pages with information designed for faculty (and this box). Or you can download these pages in several formats that you can include in your course website or local Learning Managment System. Learn more about using, modifying, and sharing GETSI teaching materials.

In this module you will learn how to use modern geodetic imaging to identify and analyze earthquake-generating faults. Light Detection And Ranging (LiDAR) yields very high resolution topographic images that can reveal fault scarps hidden by vegetation or other diagnostic features. Interferometric Synthetic Aperture Radar (InSAR) satellite data can detect cm-scale ground movements over large areas, aiding researchers in understanding subsurface fault geometries. You will use both these methods to analyze earthquake risk to critical infrastructure such as housing, transportation, water, and energy corridors. By the end of the module you will be able to:

Unit 1: If an earthquake happens in the desert and no one lives there, should we care about it? 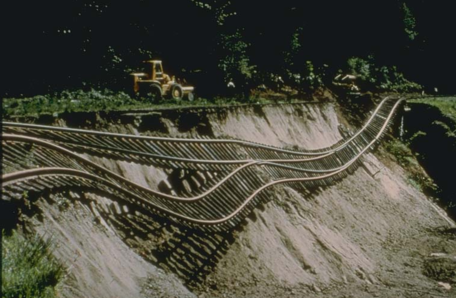 Provenance: NOAA Natural Hazard Image Database (http://www.ngdc.noaa.gov/hazardimages/picture/show/26 ) Original image credit: University of California at Berkeley
Reuse: This item is offered under a Creative Commons Attribution-NonCommercial-ShareAlike license http://creativecommons.org/licenses/by-nc-sa/3.0/ You may reuse this item for non-commercial purposes as long as you provide attribution and offer any derivative works under a similar license.

Unit 1 is the introductory exercise for this module, and it is intended to provide the societal context for consideration of how faults can impact the infrastructure that human populations have become dependent on. The first step in this process is to consider what types of infrastructure exist that are necessary to support the modern lifestyle, especially for those living in population centers. In cases where the population centers themselves are in regions with earthquake activity, there may be some awareness of this issue, but one also will need to consider how key infrastructure such as aqueducts, power lines, or oil and gas pipelines traverse large distances away from population centers where they may also be susceptible to damage by earthquakes. An additional consideration is that earthquakes can occur in regions where none have occurred in recorded history. The ability to recognize and evaluate the potential for damage to key infrastructure that are located near or that cross a fault can be used, in turn, to classify, and ultimately predict the most and least likely locations for damage, and thus suggestions can be made for minimizing impacts should an earthquake occur. One final note, the entire module is designed to make you aware of how earthquakes impact society. You will need to record your thoughts on this subject now and again at the end of Unit 5. 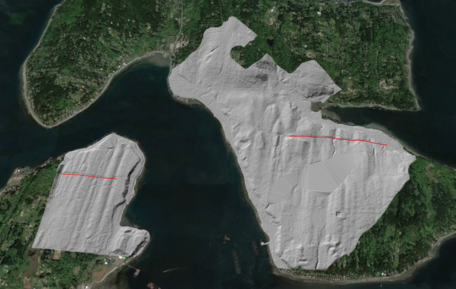 ×
LiDAR ground-return image is able to show topographic offsets, such as this active fault on Bainbridge Island, WA - even though the land surface is obscured by vegetation.

Provenance: Underlying image from Google Earth. LiDAR data from OpenTopography (http://www.opentopography.org/ )
Reuse: This item is offered under a Creative Commons Attribution-NonCommercial-ShareAlike license http://creativecommons.org/licenses/by-nc-sa/3.0/ You may reuse this item for non-commercial purposes as long as you provide attribution and offer any derivative works under a similar license.

The advent of airborne LiDAR has been a boon for studies of fault geomorphology as applied to seismic hazard. We now have access to a collection of high-resolution topographic data over many of the active faults in the United States and across the globe. The ability to measure returns from the ground, rather than the tops of trees or bushes, is especially useful in vegetated areas. This module will have two elements. First, we will identify locations where the signature of active faulting (strike-slip faulting, normal faulting, and thrust faulting) is captured in the landscape, and learn to interpret those geomorphic features associated with each fault type. Such features might include fault scarps, altered stream drainage patterns including basin asymmetry, wind and water gaps, and scarps or benches. These features represent the interplay between extrinsic variables such as earthquakes and intrinsic variables such as weathering, fluvial processes, and climate. Second, we will use the different scales of offset features on a number of faults such as the San Andreas Fault to obtain both a slip rate and a recent slip history of large earthquakes. This will require bringing in time and a grasp of the appropriate rates for the various surficial processes responsible for creating the features being used as reference markers. In this unit we will use freely available high-resolution hill-shaded imagery in combination with satellite images from Google Earth.

Unit 3: How to see an earthquake from space (InSAR) 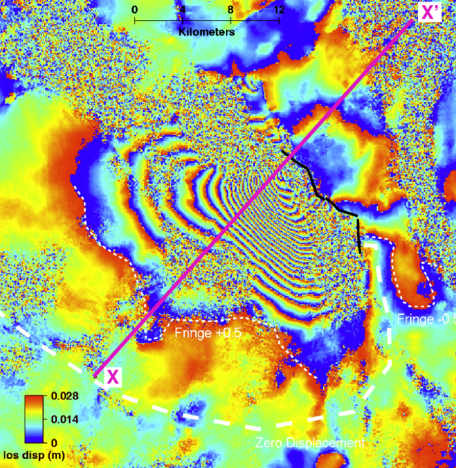 ×
Interferogram of the Dinar, Turkey 1995 earthquake. InSAR allows for the measurement of topographic change over a broad area. Data processed by Gareth Funning.

Provenance: Gareth Funning (University of California Riverside)
Reuse: This item is offered under a Creative Commons Attribution-NonCommercial-ShareAlike license http://creativecommons.org/licenses/by-nc-sa/3.0/ You may reuse this item for non-commercial purposes as long as you provide attribution and offer any derivative works under a similar license.

The aim of this exercise is to introduce you to a recently developed method called Interferometric Synthetic Aperture Radar (InSAR). The interferogram represents a map of the displacement of the ground surface during the earthquake. The pattern of interference fringes can be interpreted as a series of contours of equal surface displacement. Such data can be used to give additional information about the earthquake that could not be determined by seismology or field investigation alone, such as the amounts and relative proportions of uplift and subsidence caused by the event over an area tens of kilometers wide. In combination with the digital elevation model of the same area, we can also examine the relationship between earthquakes and surface topography.

Lab exercise handouts, including instructions and questions for the lab exercise.

Google Earth KMZ files of Dinar interferograms (to be optionally used in the lab exercise, depending on the plans of your instructor).

Unit 4: The phenomenology of earthquakes from InSAR data 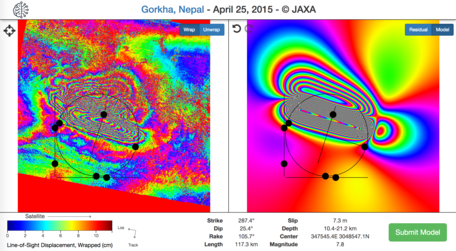 ×
This screen shot from the Visible Earthquakes tool has a real interferogram on the left and a model one on the right, which is generated in response to the fault rupture parameters defined by the user.

Provenance: 3Point Science http://www.3ptscience.com/earthquake
Reuse: This item is offered under a Creative Commons Attribution-NonCommercial-ShareAlike license http://creativecommons.org/licenses/by-nc-sa/3.0/ You may reuse this item for non-commercial purposes as long as you provide attribution and offer any derivative works under a similar license.

How are different types of earthquakes represented in InSAR data? How can we obtain detailed information on the earthquake source from InSAR data? How well can we resolve those details? In this unit, students investigate how simple elastic dislocation models can be matched to interferograms of earthquakes, and the various geometrical and surficial factors that can affect that process. This unit is a practical exercise that requires access to computers. After some reinforcement of the terminology of earthquake source parameters and some exploration of concepts of the earthquake cycle and elastic rebound, students use the Visible Earthquakes tool to model InSAR data of at least two earthquakes. The whole class will model the same event (a normal faulting earthquake from Turkey), and then a variety of other events of other faulting styles and orientations. The aim of this exercise is to develop an intuition for how the patterns of surface deformation captured in radar interferograms relate to how the fault responsible for a given earthquake moved, and what else we can learn about that fault and that earthquake from the data. We will achieve this through a hands-on modeling exercise using an interactive web tool. We will also investigate how well we can resolve the various "source parameters" (quantities such as the strike, dip and fault length) of a given earthquake, by comparing different attempts to model the same data, and what the implications of this might be for estimating seismic hazard.

Unit 5: How do earthquakes affect society? 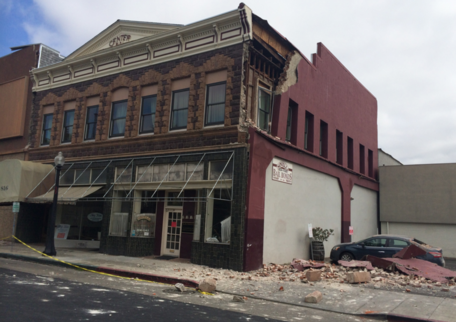 Provenance: USGS ( https://www.usgs.gov/media/images/2014-south-napa-ca-m6-earthquake-august-24-5 ) - public domain
Reuse: This item is offered under a Creative Commons Attribution-NonCommercial-ShareAlike license http://creativecommons.org/licenses/by-nc-sa/3.0/ You may reuse this item for non-commercial purposes as long as you provide attribution and offer any derivative works under a similar license.

Unit 5 is intended to be a synthesis of the LiDAR and InSAR analysis techniques and concepts covered in the previous four units of this module. This final unit addresses a real-world scenario, emphasizing potential societal impacts. You will need to recall and apply previously learned material. The exercise will ultimately require you to produce a project report with implications for population centers that are in tectonically active areas that may or may not have had recent earthquake activity. Unit 5 also serves as the summative assessment for this entire module. It has been set up with a series of specific tasks that will, upon completion, provide the background/context for the report, as well as the generation and analysis of several different geodetic data sets that will need to be coupled with traditional earthquake information such as first motion fault solutions. One final task will involve recording your thoughts on the subject of the impact of earthquakes on society and its supportive infrastructure. You will need to record your thoughts on this now that you have spent time considering this question and working through a sufficient number of earthquake data sets to have a feeling for the magnitude of the impact and the uncertainties that are inherent due to the limited nature of the data given the scope of the problem.