Students synthesize their findings about the contributions of thermal expansion, ice melting, and vertical land motions to make evidence-based arguments for stakeholders in various communities around the world.

Obtaining, Evaluating, and Communicating Information: Compare, integrate and evaluate sources of information presented in different media or formats (e.g., visually, quantitatively) as well as in words in order to address a scientific question or solve a problem. HS-P8.2:

Obtaining, Evaluating, and Communicating Information: Communicate scientific and/or technical information or ideas (e.g. about phenomena and/or the process of development and the design and performance of a proposed process or system) in multiple formats (i.e., orally, graphically, textually, mathematically). HS-P8.5:

Sea-level rise due to the melting of glaciers and ice sheets and ocean thermal expansion has significant societal and economic consequences. In this final unit, students prepare a summary of the impacts of sea level for relevant stakeholders. Students will integrate the stakeholder analysis in Unit 1 with the geodetic data (radar satellite altimetry, GRACE [Gravity Recovery and Climate Experiment], InSAR, and GPS) of ice mass loss and sea-level rise from Units 2–4 in their analysis. Unit 5 is the summative assessment for the module.

Hide
Online-ready: The exercise is a final project that can be done remotely, individually or in small online groups.
Used this activity? Share your experiences and modifications 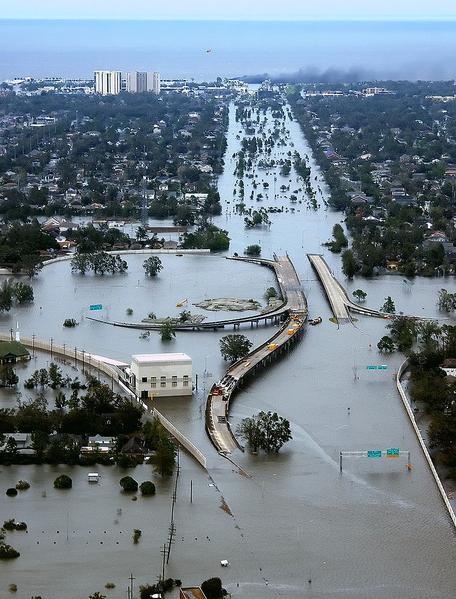 ×
Flooding in New Orleans from Hurricane Katrina. In this unit students will asses the potential societal and economic consequences of sea level rise, as shown in this image. From Wikipedia

Provenance: Source: https://en.wikipedia.org/wiki/Hurricane_Katrina#/media/File:KatrinaNewOrleansFlooded_edit2.jpg
Reuse: This item is offered under a Creative Commons Attribution-NonCommercial-ShareAlike license http://creativecommons.org/licenses/by-nc-sa/3.0/ You may reuse this item for non-commercial purposes as long as you provide attribution and offer any derivative works under a similar license.

1. Analyze geodetic data to assess ice sheet changes and the causes of observed sea level, and will make predictions of future sea-level rise.

2. Assess the societal and economic consequences of observed and projected sea-level changes on regions most vulnerable to sea-level rise.

This activity is intended for use as a summative assessment for the entire module and gives students the opportunity to apply knowledge gained in the other units. This unit cannot be completed successfully without the skill and knowledge gained from previous units. Although Units 1–4 could be done without Unit 5, this unit provides an excellent opportunity for students to apply their new skills in a societally relevant context through the incorporation of a stakeholder analysis. The overall structure of this activity may be adapted for use in lower-level courses. This might require more group work throughout and could be heavily structured by the instructor (for example, by providing a template for the stakeholder analysis or setting up spreadsheets for the plotting and modeling aspects).

Unit 5 serves as the summative assessment for the entire module. Students pull from analyses and activities in previous units to write a Stakeholder Report. The majority of the write-up can be done outside of class. Thus the class time needed is just to introduce the assignment, which is then completed at home. The summary focuses on the consequences of sea-level change for the various stakeholders in those communities with the most imminent threat: coastal developing country, major coastal urban area, or an island nation. Given this subject matter, there is wide opportunity to include socially relevant discussions and applications of various means of determining how to approach this report. Unit 1 provides a basis for selecting which of the various stakeholders the document could be written for. It would be good to remind the students at the start of Unit 5 that they will need to be thinking about what they learned in their stakeholder analysis and use this to help them organize how they will be framing their arguments and who will be the stakeholder they choose to write their report for. The different data sets and techniques used in Units 2–4 provide independent lines of working with the quantifying rates of sea-level change and the contributing factors. In order to give students practice in moving from thinking like students to considering how scientific analyses need to be converted to materials useable by nonscientists, the assignment requires the students to reframe what they have determined into a report useable for a stakeholder identified by the student, who may be in the most strategic position for effecting change based on findings from scientists.

An outline for the Stakeholder Report is provided for the students, as well as a grading rubric for the report. It should be noted that the report should be succinct and designed to provide 2–3 salient points with supporting documentation in the form of plots and tables. A set of appendices may be included that will have a substantial portion of the plots, question answers, models, and summaries of the results for Units 1–4.

A separate metacognition response may also be required. This asks the students to reflect on what part of the module they thought matched their expectations and what part did not match their expectations or surprised them. This type of contemplation on a student's own learning journey has been shown to positively influence learning.

Because this unit requires a writing style that may vary from a standard lab report, a number of links are provided below that provide instruction in some basic techniques for a more traditional prose writing style.

Unit 5 is the primary summative assessment for the module. The report will be based in large part on the student's responses to the requirements of the reports as outlined in the student handout for the organization of this report. Instructors may modify this rubric to assign point values in a manner that is consistent with their course-grading scheme. Student metacognition is an important part of the learning process. Unit 5 has a second handout that asks the students to reflect on their own learning during this module and its personal significance. Students' responses may be scored using the rubric included in the second student handout.

These are the same references as were given in Unit 1.