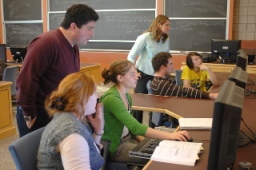 Biology and Computer Science majors collaborated to design and implement algorithms to model a genomic-level process: the evolution of protein-coding genes. Students had to combine their respective expertise in biology and computer science in order to successfully model this process.

We used a pedagogical approach that starts with a biological question that requires a computational approach to solve. The instructors provided students with partial "starter code" that implemented part of the algorithm. Students refined and elaborated/simplified the code to more accurately model the process. They compared their output to empirical data (an alignment of HSP70 protein sequences) to determine which most closely matched their model.

This is appropriate for use in an upper level bioinformatics course in which the students have already become familiar with:


Discussion of the biology:Students discuss what they know about how DNA and protein sequences change over time, and the class discusses the process of DNA mutation, which is presented in the textbook as a primarily random process. The biology students, however, should be able to contribute information that the pattern of nucleotide substitution is probably not random, because alternation of an amino acid might affect the function of a protein, so the nucleotides that are most likely to vary are those in the the position of codons. Class discusses how the process of mutation may be random, but the process of selection will prevent most amino-acid altering substitutions from persisting.

Discussion of the algorithm:How might we model how protein evolution might look under two different scenarios: a random vs targeted nucleotide substitution approach. The Bio/CS pairs are given "starter code" that they must further modify and develop to model the effect of a random vs. targeted substitution on the the human Heat Shock Protein 70 (HSP70).

Assignment: Compare effects of substitutions that occur under a random vs. targeted to 3rd position of codons:

This teaching activity was developed in the context of an upper level team-taught course (computer science and biology).

Week 1: Random and alignments Week 2: Mutation experiments Week 3: Assessing the models by comparing substitutions in a homologs of HSP70 in metazoa.

However, this module could be done entirely making use of open source web-based tools (clustalw) as well as any system that can run code (such as linux or dos).