Part B: Following the Energy Flow 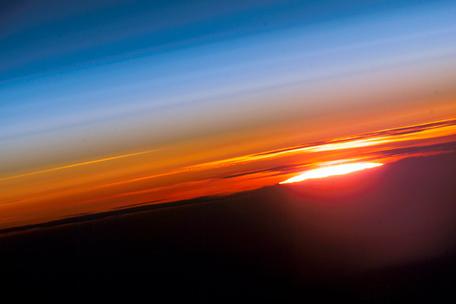 ×
The profile of the atmosphere and a setting sun are featured in this image photographed by an Expedition 15 crew member on the International Space Station. June, 2007. Source: NASA

Solar power drives Earth's climate. Energy from the sun heats Earth's surface, warms the atmosphere, provides energy for photosynthesis, causes evaporation, drives the weather and water cycles, and powers the ocean currents. In the astronaut photograph at right, taken from the International Space Station, you can see the sun setting through the atmosphere.

When we look up at the sky from the ground, the atmosphere seems to go on forever, but in reality it is extremely thin when compared to the diameter of Earth. To get a sense of the thickness of the troposphere and stratosphere, two important layers of the atmosphere, try this simple exercise. Use a compass to draw a circle with a radius of 127 mm. This circle represents the Earth and the inner-most atmosphere. The 1 mm line, that your pencil draws, represents the average thickness of the the first two layers of the atmosphere: the troposphere, the region of weather, and the stratosphere, which protects us from most of the Sun's harmful ultraviolet (UV) radiation. As you work through the these labs keep this relative scale in mind.

Show me more about this example 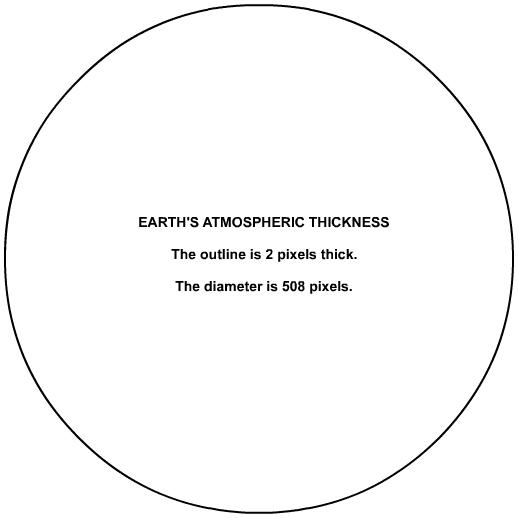 Radiation is the transfer of energy by electromagnetic waves. You have probably seen a heat lamp warming food in a cafeteria; the heat lamp is using one type of long-wave electromagnetic radiation, infraredinfrared radiation: the long wave, electromagnetic radiation of radiant heat emitted by all hot objects. On the electromagnetic spectrum, it can be found between microwave radiation and visible light. light waves, to heat the food. Energy is transferred from the sun to Earth via electromagnetic waves, or radiation. Most of the energy that passes through the upper atmosphere and reaches Earth's surface is in two forms, visible and infrared light. The majority of this light is in the visible spectrum. As sunlight enters the Earth system one of two different things can happen: it can either be absorbed or reflected. Once energy has been absorbed by the Earth system, it is transformed and transferred. Eventually, after multiple transfers, this radiation is emitted back to space, keeping our planet in an energy equilibrium.

All matter is made of particles, such as atoms and molecules. These particles are always in motion; this motion is known as kinetic energy. The thermal energy of a unit of matter is the total kinetic energy of all the particles in a given volume, which we measure as temperature. The transfer of energy from one region to another is called heat. This transfer of energy can take place by three processes: radiation, conduction, and convection. Thermal energy, or heat, always moves from things that are warmer (have more energy) to things that are cooler (have less energy). For example, when you touch an ice cube with your warm hand, the energy is transferred from your hand to the ice cube, causing it to melt. The heat from your hand causes the temperature of the ice to rise — this is called sensible heat because it can be sensed or measured with a thermometer. Once the ice begins to melt, the heat is no longer changing the ice's temperature but now changing its phase, in this case from ice to water — this use of heat in phase change is what's known latent heat.

In this lab, you will examine the complex energy pathways and balance that helps to keep our planet within an ideal temperature range.

To begin, watch the video below and take notes on what you learn. You'll get a sense of how the solar energy moves through the Earth system. Pay attention to how the energy moves from the sun to Earth and back out to space. Note the names of the energy types and when they are absorbed or reflected.

After watching the video, answer the Checking In questions listed below about the Global Energy Balance.

EarthLabs
To view a helpful Energy Budget iPad interactive, use this link to download/open the free TERC EarthLabs App. 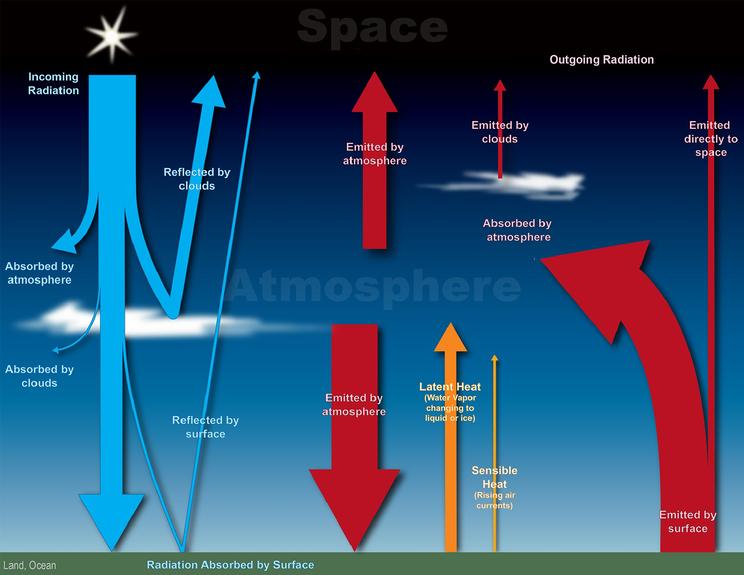 In order to simplify your accounting, you will break the process of energy flow into three parts. Use the diagrams and text below to guide your steps. While the process is continuous, and not step-by-step, this activity will help you to separate out the details and create an energy "account."

Before you start you will need to gather 100 pennies, paper squares, poker chips, Lego, or small cubes to help you with your accounting. You will also need 3 colored pencils: red, blue, and orange. Once you have the needed supplies, download and print this Energy Balance recording sheet (Acrobat (PDF) 1.5MB Feb1 22) and a copy of the Energy Balance Instructions (Acrobat (PDF) 5.8MB Feb1 22) to read as you work through the lab.

Once you have gathered your materials, you will read a section of the printed instructions and then move pennies representing the energy from one location to the next.

Solar energy, in the form of radiation, is constantly moving through space; bathing our planet and its atmosphere. The radiation that arrives at the top of the atmosphere is either reflected or absorbed.

In Part 1, you saw that about 30 percent of incoming sunlight is reflected back to space by particles in the atmosphere or bright ground surfaces, which leaves about 70 percent to be absorbed by the atmosphere (23 percent) and Earth's surface (47 percent) including the ocean. For the energy budget at Earth's surface to balance, processes on the surface must transfer and transform the 47 percent of incoming solar energy that the ocean and land surfaces absorbed back into the atmosphere and eventually space. Energy leaves the surface through three key processes: evaporation, convection, and emission of thermal infrared (IR) radiation.

Show me how this is calculated

Hide
This is the long-wave radiation that is emitted from Earth's surface to the atmosphere (116), minus the energy that is directly transferred to space (12) combined with that which re-radiated back to Earth by the atmosphere (98). The equation would be: [116-(12+98)]= 6

Part 3. The Atmosphere's Energy Budget
The third step of the process moves the energy from the atmosphere back to space, through the following processes.

Return to the Energy Balance video, above. Review the video one more time with the energy accountant steps in mind. Then answer the Stop and Think questions below.

6. Now that you have worked through the Earth's energy balance, discuss how changes in Earth's surface characteristics and / or atmospheric composition could contribute to global warming or cooling.

7. Complete the following phrases and add one of your own:

How do we know what we know?

Measuring Earth's radiation balance is an enormous and important task! How can we accurately and simultaneously know how much energy is coming into the Earth system, being reflected by clouds, and being emitted back to space? To gain a global understanding of this balance scientists use instruments on satellites. The following video explains how the Clouds and the Earth's Radiant Energy System (CERES) sensors on NASA's Aqua and Terra satellites measure Earth's Energy balance.

NWS Jetstream - The Earth-Atmosphere Energy Balance website has additional explanations, diagrams and a short explanation of how cloud cover can contribute to warmer night time temperatures.

Show me more about the units used in this exercise

Hide
The units on the diagrams in this exercise are in terms of percentages of the incoming 342 watts per meter2 of solar energy. These percentages may not be exactly the same in every diagram, as there is some variation in scientists' explanation about how much energy is in each part of the system.

*This video replaces a Flash animation.