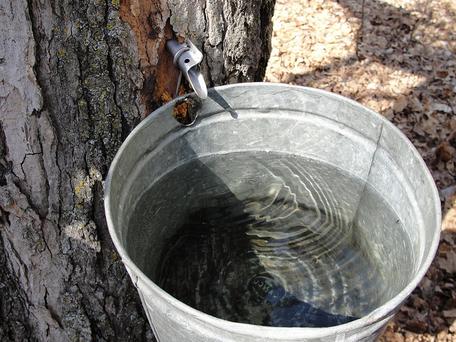 As discussed in the Sugaring Wisconsin video (shown in Lab 1B), the supply of the precious maple sap in the spring of each year relies upon a unique combination of climatic conditions including: a summer of sufficient rain and moderate temperatures followed by a winter that produces a generous blanket of protective snow over the trees roots.

With the changing of the seasons from winter to spring, which produces a cycle of warm days and freezing nights, the maple sap begins to move up the stem of the trees. In trees that have been tapped for collection, the sap then flows from the taps in the trees into buckets (pictured right) or plastic tubing. Maple syrup producers collect the sap and boil it to concentrate it into maple syrup and sugar. The sap flow ends when night time temperatures no longer fall below freezing. Typical sugaring seasons last up to eight weeks, generally from late January until early April.

Get a sense of average winter temperatures in the Northeast

Examine the graphic below. Observe how the average winter temperatures change as you move from south to north across the map. This variation is important to the timing and duration of the sap flow season. Click on the image for a larger, clearer view. Note: North is up on this map. 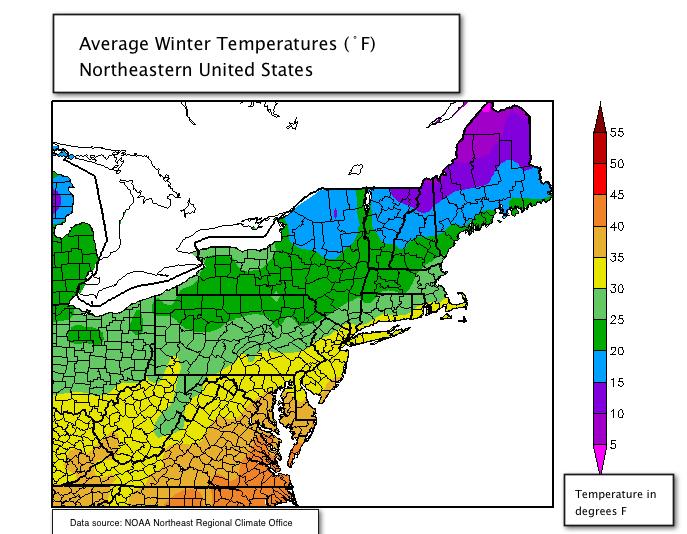 Check your understanding of the map graphic above by using the questions below. Select all the answers that are correct, and then click the Check Answers button at the bottom of the list.

When will the sap flow begin?

Use your knowledge of maple sugaring (Lab 1B), and average temperatures in Vermont (Lab 1C) to predict when you think the sugaring season should begin. Write down the approximate date range that you think is most likely to be the start of the sugaring season. You will need to get your buckets washed and your taps sterilized before this date!

Temperature trends that could affect the maple syrup production

Now that you have examined an average climate as well as daily, monthly, and annual weather patterns, you will take a look at a much longer climate record, 120 years. Scientists, who study climate, use a minimum of 17 years of data to view trends in climate—this record is over 100 years longer.

Examine the very long-term temperature trends for the state of Vermont. To access the data go to Southern Climate Impacts Planning Program (SCIPP) data products page and select the historical climate trends tool (scroll down the list). On the page that loads, set the following parameters:

The SCIPP site will generate a graph of historical climate data for you to observe. Click the "Chart Info" button to read more about the data on the graph. Once you have a graph to observe, complete the following:

In this lab, you were introduced to a seasonal event, maple sugaring, which is linked to climate. Are there similar events in your own region? For example, in some climates there is an "ice-out" date when the lakes and rivers thaw in the spring. Other seasonal events of note are the start of the "monsoon season" in the Southwest and autumn leaves changing color in New England.

Research and discuss local seasonal events with your classmates. When do they begin and end? Are they connected to agricultural practices or celebrations? Have their average dates of occurrence changed over the past 50 years?

You will return to this maple syrup case study later in the module. In the next few labs, you will learn a little more about the factors that drive weather and climate as well as climate's impact on ecological regions, or biomes.

Use the Southern Climate Impacts Planning Program (SCIPP) data products website to research other climate trends, such as precipitation, or climate trends in other regions or states.

Explore more regional climate data, including average temperatures and precipitation, as well as departures from normal, for both monthly and annual data. Northeast Regional Climate Center. This site also includes data from other regions.

Read about climates impact on other agricultural products including: