Putting Hurricanes on the Calendar

How well does HURDAT represent reality? 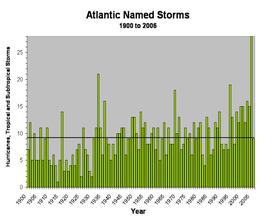 If you study the HURDAT in the graph above, you might assume that the number of Atlantic Named Storms have been increasing across the years, but could you be sure that the number of tropical storms was actually increasing? Whenever you use a database of information to help answer a question, it's important to consider what biases may be present in the data...

Recall that when the National Weather Service began keeping HURDAT records in 1851, the only tropical storms that were entered into the database were the ones that had been detected by people on land or by ships at sea. Today, a broad array of sensors on satellites, aircraft, and buoys continually monitor the entire Atlantic basin to detect tropical storms.

Dr. Christopher Landsea, Science and Operations Officer at the National Hurricane Center, published an article in 2007 detailing his analysis of the biases in the HURDAT database. Counting Atlantic Tropical Cyclones Back to 1900 provides several graphs and examples to compare hurricane counts from different time periods. From his analyses, he has deduced specific values by which storms may have been undercounted during different periods. He argues that the increase in the annual number of storms shown in HURDAT reflects increased monitoring capabilities rather than a change in the climate in which they develop.

Some scientists have used HURDAT data to link Atlantic hurricane trends to climate change. They disagree with Dr. Landsea's assumption that the long-term annual number of tropical cyclones has remained stable over time.

Follow the real-life scientific drama over the accuracy of HURDAT by downloading and reading papers by Mann and Emanuel (2006), Landsea (2007), and Mann and Emanuel (2007). Follow up on more recent work by these and other meteorologists to decide if the frequency of tropical storms has changed over time.

Why is HURDAT so important? 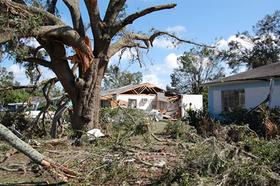 Communities use information from the HURDAT database in setting building codes, assessing risk for emergency managers, and calculating potential losses for insurance and business interests. Additionally, scientists use the database to check their forecasting techniques, verify their predictions, and to study changes that may be attributed to climate change.

The accuracy of the data is important enough that NOAA makes continual efforts to assess and improve the database. For example, some scientists have contributed to the effort by investigating leads in historical documents to help them identify storms that may have been missed. Other efforts focus on the accuracy of storms' paths. Read more about the HURDAT Re-Analysis project to learn how changes are decided upon and implemented to this important collection of data.