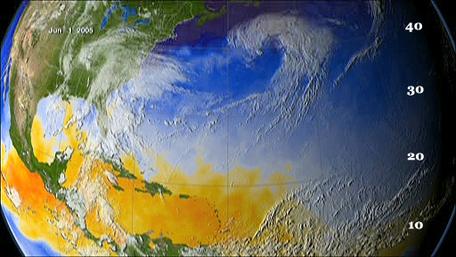 Hide
This image is the first frame of a NASA animation of the 27 storms in 2005 Atlantic hurricane season. The video combines satellite imagery, sea surface temperature information, storm track overlays to give a comprehensive look at this record-breaking season of storms. Latitude labels have been added to the image.

The U.S. Weather Service has been documenting tropical cyclones in the Atlantic Ocean for over 150 years. The hurricane season of 2005 broke several records, making it the most extreme season since record keeping began: 2005 had the most hurricanes in one season (15), the most category 5 hurricanes (4), the most intense Atlantic hurricane ever recorded (Wilma), and the first recorded European landfall of an Atlantic cyclone (Vince).

The movie you are going to watch was prepared by NASA's Scientific Visualization Studio. It shows all of the named storms from the 2005 Atlantic hurricane season. The movie includes a combination of three different types of data collected by NOAA and NASA satellites: it shows landforms, sea surface temperatures, and infrared imagery of clouds, from June 1, 2005 through January 10, 2006. Overlays showing storm paths and names have also been added to the video.

You may also want to consult the 2005 storm information sheet (Acrobat (PDF) 92kB Jun21 22) for a list of the storms, their dates, and their maximum intensities.


Keeping Track of What You Learn

Throughout these labs, you will find two kinds of questions. Your teacher will let you know which answers you should record and turn in.