Putting Hurricanes on the Calendar 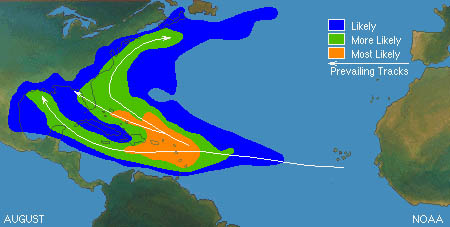 NOAA
What is Hurricane Season? It's when the chance of hurricanes is very good, just as rainy season in some regions means a greater likelihood of rain. Similar to variations in rainy seasons or any season, hurricane seasons differ depending on where you look. There are seven Tropical Cyclone basins, or hotspots, around the globe; and one basin, in the northwest Pacific, has a hurricane season that lasts all year. In the Atlantic Basin, where we've been focused, the hurricane season lasts from June 1 to November 30 each year.

Consider the storm you looked at in Lab A and visit this page with Monthly Hurricane Data for the Atlantic Basin from HURDAT2. Where does your storm fit within the data? How typical was it for the time of year based on the data?

Which months seem to have the fewest tropical storms?

Which months have had the most tropical storms and hurricanes reported?

Now that you've looked at the numbers behind the Atlantic Basin hurricane season, you're going to take a look at some graphs and visualizations of the HURDAT2 data.

Visit the National Hurricane Center's page on Tropical Cyclone Climatology and look over the Overview at the top before moving on. There you'll see an image of the seven tropical cyclone basins mentioned earlier. See if you notice anything about their locations or similarities in the mean tracks (arrows) and how that compares with what you've already learned about hurricanes.

Read through the Atlantic & Eastern Pacific Climatology, and Points of Origin by 10-Day Period sections and pay attention to the graphs and data images.

As you look through the 10-Day images, which include only named storms, take note of where the hurricane starting points are, especially in the Atlantic and Gulf of Mexico, and both the hurricane tracks and any patterns you see either in each image or as the season progresses.

Finally, look at the Areas of Origin and Typical Hurricane Tracks by Month and see how they compare with the 10-Day images that follow.

2: Looking at the 10-Day Points of Origin maps, describe some patterns you notice in where the storms begin from the May through November. Describe what you think might be responsible for these changes.