Severe Tropical Cyclone George came ashore near Port Hedland on the northwest coast of Australia on March 8, 2007. The storm had average winds of about 195 km/h, gusting to 275 km/h.

In the South Pacific basin, they use the Australian Cyclone Scale to indicate storm intensities. Developed by the Australian Bureau of Meteorology, this scale places primary emphasis on the strength of individual wind gusts rather than the 10-minute sustained winds that the Saffir-Simpson scale uses. On the Australian scale, George was considered a borderline Category 4/Category 5 storm.

Click the image to see the animation. Check the color code to interpret what's happening in the storm. 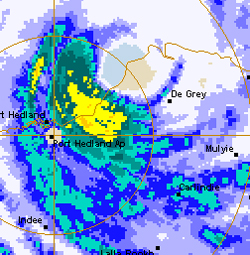 Hide
This image is a frame from a visualization of Severe Tropical Cyclone George coming ashore in Northwest Australia near Port Headland. Details 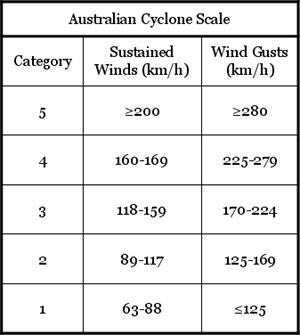 Answer the following questions to check your understanding of the information provided above.

The term "storm surge" refers to water that is pushed up to higher-than-normal levels at the shore by the winds of a storm. The spiraling nature of winds in cyclones result in winds on one side of the storm blowing on-shore (towards the land) in the same direction as the storm's motion. In the Northern Hemisphere, the storm surge occurs on the right side of the eye (using the direction of motion as facing forward) because that is where the winds and storm motion reinforce each other. On the other side, where winds are blowing offshore (away from the land) there is no storm surge and in fact most times the water level is lower than normal. If the storm surge occurs at high tide, then the coast experiences a worst case situation.

1: Which side of a Southern Hemisphere cyclone will experience the higher storm surge? Draw a diagram of a hypothetical storm to illustrate how you came to your conclusion. Label the relevant parts of the storm as well as the wind and motion directions.
2: Based on your answer to #1, was the storm surge from Cyclone George to the East of the eye or to the West when it came ashore? Remember that George was moving generally south. 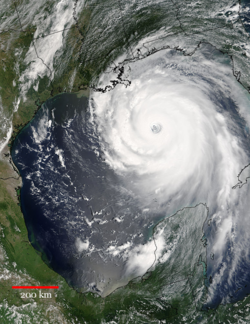 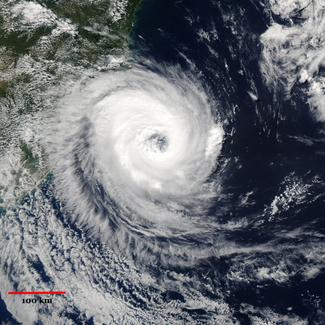 These two pictures represent examples of hurricanes in the Northern and Southern Hemispheres respectively. On the left, you see Hurricane Katrina on August 29, 2005 just before it made landfall on the Gulf Coast of the US. On the right is Hurricane Catarina on March 28, 2004 as it was making landfall on the coast of Brazil. Note that the scale is not the same for each image.

Both of these storms were record breakers in their own ways.

3: Based on the images and text, compare and contrast these two storms.
4: Catarina was on the borderline between Category 1 and 2. Despite its relatively weak status, the storm damaged or destroyed about 26% of all the buildings in the region of Brazil where it came ashore. The storm caused about $25 million in damages. Based on what you've learned, formulate an explanation for how a relatively weak storm could cause so much damage.