Part C: Under the Hood


Advances in computer models and observational methods have made it possible to learn more about how hurricanes develop. These still images and animations give a detailed view of our current understandings of these storms. 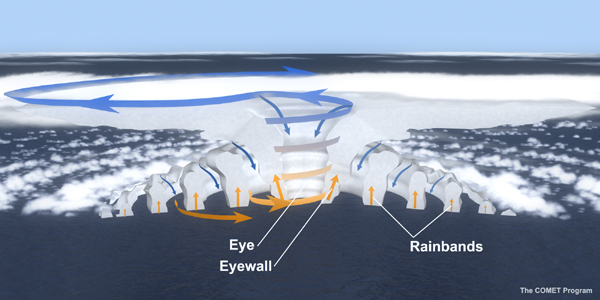 Cross-section of a mature tropical cyclone, with air flow marked by arrows. Details

Winds spiral in towards the low pressure area at the heart of a hurricane. In the northern hemisphere, this direction is always counterclockwise due to the Coriolis Force. All this air rushing in has to go somewhere, and it begins to rise as it gets close to the center of the low pressure.

The mass of twisting, incoming air rises, becoming cooler and drier as its heat and moisture are released. Once it reaches the top of the storm, the air has to go somewhere to "get out of the way" of the air coming up behind it. Some of this air goes back down through the center of the storm, suppressing winds and clouds and forming what we know as the "eye" of the hurricane. The continually rising air just outside of the eye forms the storm's "eyewall."

The rest of the air at the top of the storm spreads out from the core of the storm. This outflow is also affected by the Coriolis Force, but since it is flowing away from rather than towards the center, it is spun in the opposite direction from the air near the surface. You can see this in the illustration as well. So the storm is turning in different directions at different altitudes!

1: There isn't a legend to explain it, but what would you deduce that the color of the arrows shows in the image?

"Towers in the Tempest" is a 4.5 minute video created by the NASA Science Visualization Studio: it shows one way that hurricanes can intensify, given the right conditions. Researchers investigate the phenomenon of 'Hot Towers' with sophisticated computer models combined with satellite observations from real storms. These simulations and observations allow scientists to get a glimpse of what's happening inside all the rain and clouds. The results have led to new conclusions about the energy that drives hurricanes.

Answer the following questions to check your understanding of the information provided in the video.

2: Remember when you calculated the amount of water from Hurricane Isabel? Using the numbers you calculated, determine the total amount of heat released by the condensing water. You need to know that the energy released in the condensation of 1 kg of water vapor into 1 kg of liquid water is 2,260 kJ.
3: The largest nuclear device ever detonated was a 58 megaton bomb tested by the Soviet Union in 1961. It released 2.4 x 1014 kJ of energy. How does this compare to the heat energy released by Hurricane Isabel over its lifespan? Show your calculations and then interpret the results in your own words.