As you've seen to this point, short-term climate variations often occur in cycles. In most cases, when climatic conditions returned to "normal", fishing conditions and landing totals also rebounded. But what consequences might accompany a steady one-directional trend in climate change? Specifically, how might global warming affect fisheries? 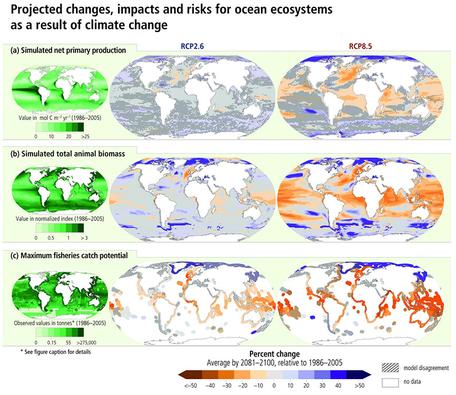 ×
This graphic from the IPCC depicts the projected changes, impacts, and risks for ocean ecosystems as a result of climate change under two scenarios of emissions. The one on the left, the RCP 2.6 scenario, is based on emissions peaking mid-century and then declining substantially over time. RCP 8.5 on the right is based on a business-as-usual carbon emissions scenario. Click to view larger.

Answer the following questions to check your understanding of the information contained in the World Wildlife Fund report.

According to the fact sheet, what are some of the major issues facing the ocean due to climate change?

Why are fish more sensitive to temperature changes than many other animals?

Hide
Fish are more sensitive because they are cold blooded and cannot maintain a constant body temperature but instead are usually the exact same temperature as the water they swim in.

Hide
Aquaculture may suffer as certain areas lose the ability to culture species that they currently farm due to rising sea levels and site location. The majority of fish grown in aquaculture are carnivorous and require wild-caught fish for feed. In developing countries, where wild catch is exported for feed, there will be both diminishing catches and pressure to convert the fish into food for domestic populations. 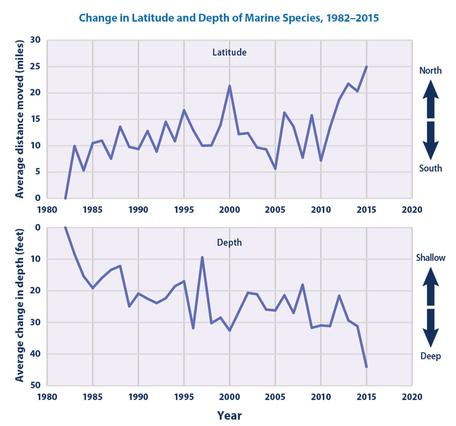 ×
From the EPA. This graph annual change in latitude (movement in miles) and depth (feet) of 105 marine species along the Northeast coast and in the eastern Bering Sea from 1983 – 2015.

A recent study explored the potential implications of long-term climate change on global fish populations. They determined that some fish species responded positively to warming, but more species responded significantly negatively to warming. They also found that ocean warming has already reduced catch potential by 4% since 1930 – that's 1.4 million metric tons of fish over 80 years. One of the study authors wrote the following paper about the findings: Ocean warming has fisheries on the move, helping some but hurting more. Your teacher may ask you to read this paper.

Next, you're going to look at two of the fish species caught in the US already affected by warming to see how their ranges have shifted or are shifting and what the future might look like for them and the fisheries supported by their species.

Alaska Pollock in the Bering Sea

Walleye or Alaska Pollock is a type of whitefish related to cod.

2. Watch this brief video to learn more about the Alaskan pollock.

Show me the distribution range of the Alaska Pollock 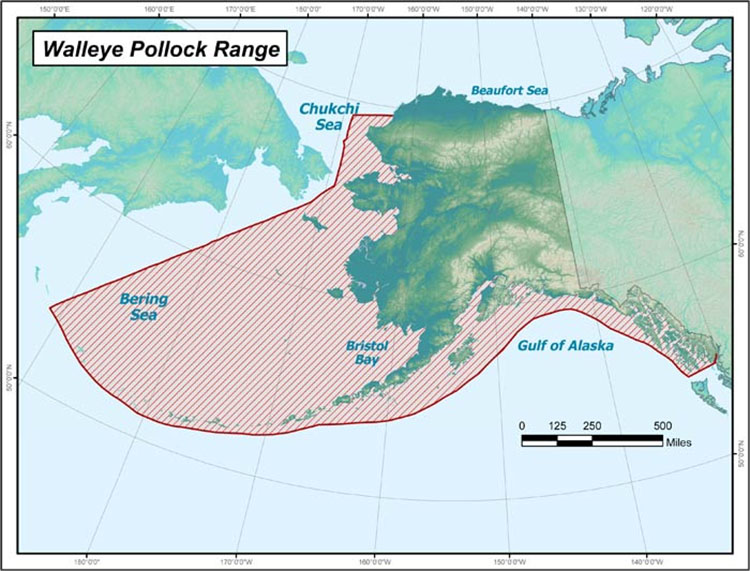 The Alaska pollock's largest concentration is managed in the eastern Bering Sea with catch shares and is considered one of the best-managed fisheries in the world. Juvenile pollock eat zooplankton and small fish. Older pollock feed on other fish, including juvenile pollock. Many other species—including Steller sea lions and other marine mammals, fish, and seabirds—feed on pollock and rely on them for survival.

3. Visit the Marine Species Distribution page at the EPA and scroll below the figure of the graph that appears and click the option for Figure 3, Average Location of Fish in the Bering Sea, 1982-2015. When it loads, click the Alaska Pollock checkbox to see its map and drag the date slider to see the change in pollock distribution from 1982 to 2014.

Studies on pollock in Alaska have recently shown that along with the northern migration of the species, warmer temperatures are now leading to an earlier and longer spawning period. Studies have also found that in years with temperature stress, juvenile pollock can take refuge, unlike adults, near the frigid waters out of the Arctic and will switch their consumption habits from their usual copepods to plankton, although they contain inadequate nutrition to prepare the juveniles for winter, or even krill.

4. Examine the graphical image that shows the estimated change in the pollock's range out to 2100. The gray areas indicate regions of the projection grid that aren't suitable for thermal habitat. Habitat quality is higher in areas of greater blue intensity. Consider what that means for the Alaskan Pollock as the ocean warms into the future.


Red Hake From Mid-Atlantic to Gulf of Maine

5. Watch this brief news video about ocean warming in the Gulf of Maine.

Show me the distribution range of the Red Hake 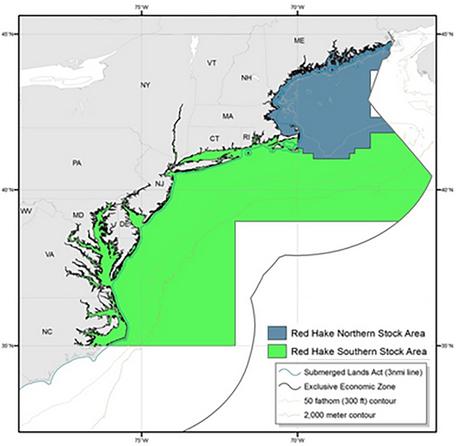 Red Hake is a type of small whitefish related to cod and caught year-round from Maine to North Carolina. Red hake feed primarily on crustaceans such as decapods and rock crabs as well as fish such as haddock, silver hake, sea robins, sand lance, mackerel, and small red hake. Primary predators of red hake include spiny dogfish, cod, goosefish, and silver hake.

6. Play this video clips to view the moving species distribution from 1968 to 2014. On the left is the spring distribution for the years listed, and on the right is the fall distribution.

7. Visit this Reuter's interactive graphic Ocean Shock and scroll through to read and view how the ocean has warmed in the last fifty years and what that has done to the movement of marine species. When you reach the final page of the graphic, in the upper left, you can select Red Hake to see its movement both North to South and Shallower to Deeper.

Hide
About 59 miles both northwards and into deeper water.

4: Discuss the challenges facing the south Georges Bank/Mid-Atlantic fisheries where red hake is considered overfished while it is also moving north due to warming ocean temperatures.

5: Discuss issues with migration of the species due to climate change. Consider both the ecological problems and the problems for fisheries. You may want to use the IPCC image at the top of the page to refer to.

6: Consider the various ways that climate change will alter and is altering the ocean. How might fish and fisheries be affected beyond the warming of the water?

A Warming Bering Sea: What Does It Mean for Walleye Pollock?

What the IPCC report says about ocean science

Physiological Challenges to Fishes in a Warmer and Acidified Future

Ocean Species Are Shifting toward the Poles

NPR Listen - Earth's Oceans Are Getting Hotter And Higher, And It's Accelerating