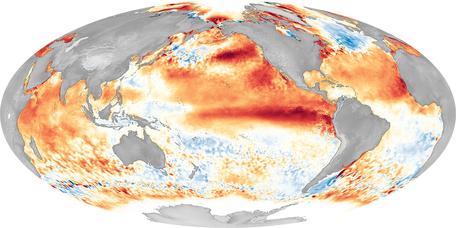 El Niño is an abnormal warming of surface ocean waters in the eastern tropical Pacific that occurs approximately every 3 to 7 years. The phenomenon was named El Niño (meaning "The Boy Child" or "The Christ Child") by South American fishermen because it typically arrives around Christmastime.

Under normal conditions, east-to-west winds drag warm waters westward. This results in a pile-up of warm water in the western Pacific, just east of Indonesia, and northeast of Australia. At the same time, cold water from deep in the ocean rises to the surface along the South American Coast.

Every few years, the trade winds change direction. This allows the pool of warm water to move eastward, where it blocks the rising cold water. These changes help trigger the global weather changes associated with El Niño.

1. Watch this brief video to learn more about El Niño.

If the video doesn't play, visit the Met Office

The oscillating warming and cooling pattern described in the video is referred to as the El Niño-Southern Oscillation or ENSO cycle. This cycle directly affects rainfall distribution in the tropics and can have a strong influence on weather across the United States and other parts of the world. El Niño and La Niña are the extreme phases of the ENSO cycle; between these two phases is a third phase called non-El Niño or ENSO-neutral.

The images below show the direction of trade winds (yellow arrows) and the location of warm ocean waters (red) under normal ocean conditions (left) and during an El Niño event (right).

2. Read more about and compare ocean conditions during a normal year and an El Niño event.

Answer the following questions to check your understanding of conditions affected by El Niño.

3. Examine the graph below of California squid landings from 1940-2018. The blue bars show the years in which particularly strong El Niño events occurred.

Show me other El Niño years during this time period 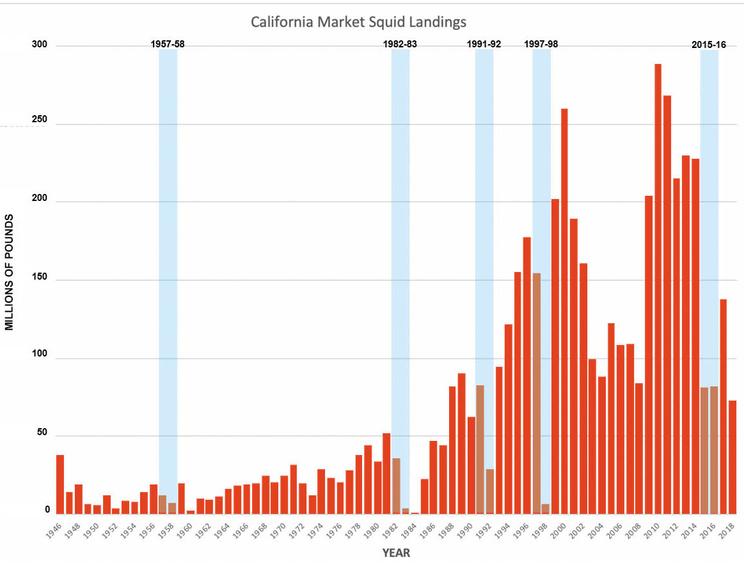 ×
Based on a NOAA graph. Data from CDFG. Click to view larger.

Answer the following questions to check your understanding of the information provided in the graph of California squid landings.

Show me what NOAA says about squid catches

Squid has become an increasingly important product in California. Landings have been increasing since the 1960s; however, we don't know if the population has actually been increasing in the warm period since 1976, or if the increased landings reflect increased fishing effort and markets for squid. This increase has been interrupted several times by major El Niño events that raise ocean surface temperatures along the California coast. Landings dropped markedly during the 1958, 1983-84, 1992, and 1998 El Niños. Squid are short lived, reproducing and then dying within 1 year. During El Niño events they are not found on their normal spawning grounds or farther north. They may be spawning in deeper colder water during these years. So far, the population has always recovered after the El Niño has passed.

1: Squid has only recently become a commercially important seafood. Explain how other species with long histories of commercial fishing and economic importance might be affected by an El Niño event. 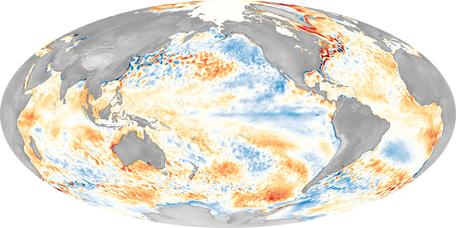 Scientists are trying to determine if squid populations have a positive reaction during La Niña, which is considered the opposite cycle to El Niño. Strong La Niña conditions occurred in 1999-2000 and 2010-2011 and squid landings during those times reached new highs. Read the following to learn more about What is La Niña.

Why might market squid landings increase during La Niña conditions?

Hide
During a La Niña the upwelling along the South American coast intensifies, which means that there is more nutrient-rich cold water available in the eastern Pacific. If squid are sensitive to ocean temperatures during El Niño events and warm normal years, La Niña years, which bring cooler ocean waters, could encourage their growth, aid ability to find food, or simply cause them to move more widely and be more easily found by fishermen.

A Video News Report of The Blob

Octopus and Squid Populations are Booming - Here's Why

Listen to this 15-minute podcast from NOAA: Tracking El Nino and its Effects on Life in the Ocean, an interview with two top scientists

Video Effects of El Niño/La Niña on Phytoplankton and fish