And On His Farm He Had Some Fish

Part A: Aquaculture Around the World 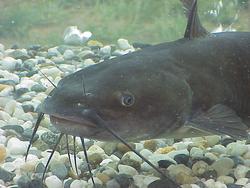 Channel catfish, the top aquaculture species in the United States. Photo courtesy of U.S. Army Corps of Engineers.
Some popular seafood, such as salmon and shrimp, are farm raised, in addition to being fished in the wild. Other popular seafood items, such as tilapia, catfish and mussels, are almost always produced by aquaculture methods. Globally, half of the world's seafood is farmed. The United States currently ranks seventeenth in the world in aquaculture, producing approximately 284,000 metric tons of seafood per year, worth almost $1.5 billion.