To Fish or Not to Fish?

Part B: Gulf of California: Aquarium of the World 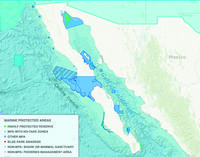 Renowned ocean explorer Jacques Cousteau once called the Gulf of California the "aquarium of the world." Nestled between the Baja California peninsula and mainland Mexico, this strip of sea represents just 0.008% of the world's seas, but is home to nearly 900 species of fish and 34 species of marine mammals. The high biodiversity of this region is due to its wide variety of habitats and complex geological and oceanographic history. The Gulf of California is also economically valuable, yielding approximately half of the entire fish catch for all of Mexico.

The Gulf of California, also known as the Sea of Cortez, has been referred to as a microcosm of what is happening to the world's oceans. In recent years, the rich biodiversity of this region has been threatened by the growth of economic activities. Decreased freshwater flow from the Colorado River, urban waste and agricultural chemical runoff, and destructive and wasteful fishing practices have resulted in the deterioration of the Gulf of California ecosystem. There are now 39 Gulf species on the World Conservation Union's endangered and threatened species list.

The richness and productivity of the Gulf of California marine ecosystem make it one of the world's top conservation priorities. Multiple protected areas have been established in this region to safeguard the inhabitants of the Gulf, the Baja California, and the neighboring mainland.


The next several labs will guide you through an in-depth look at some of the human activities and climatic changes that threaten the health and sustainability of marine ecosystems, including those already under protection. You will also be introduced to some of the other ecosystem-based management approaches that are being implemented to help revive precious resources within these ecosystems.