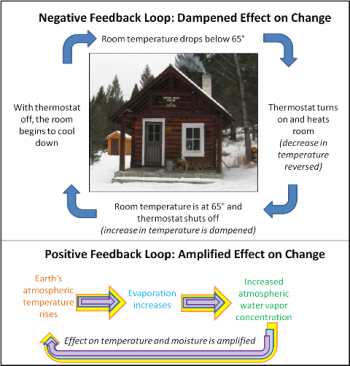 Provenance: SERC
Reuse: This item is offered under a Creative Commons Attribution-NonCommercial-ShareAlike license http://creativecommons.org/licenses/by-nc-sa/3.0/ You may reuse this item for non-commercial purposes as long as you provide attribution and offer any derivative works under a similar license.
Feedback is the exchange between the input and output of a system. When some of the output feeds back to the input of a system, it's called a feedback loop. These loops can be either reinforcing or balancing.

(adapted from The Shape of Change)

Because of their high reflectivity, snow and ice are instrumental in regulating Earth's temperature. If climate warms, then snow and ice will melt. Then what? Let's explore.

Materials you will need:

Show me Element Strips for the Ice-Albedo Feedback Connection Circle

Hide
Print and neatly cut out.

(Adapted from The Shape of Life)

Share your connection circle and feedback loops with other groups or the class.