In order to fully understand the implications of how climate is changing today, it is important to look at historical records to see how climate has changed in the past. Current climate data collection methods, including satellite observations, only cover a very small window of Earth's long history with respect to climate change time scales. Luckily, clues to past climatic conditions, dating hundreds of thousands of years back in time, are recorded in glacial ice all over the world. Paleoclimatologists (scientists who study past climate) make inferences based on indirect measures of proxy dataproxy data: data that paleoclimatologists gather from natural recorders of climate variability, e.g., tree rings, ice cores, fossil pollen, ocean sediments, coral and historical data, that can help extend our understanding of climate far beyond the 140 year instrumental record.—biological, geological, or chemical indicators that reflect climate conditions. For example, glacial ice is made up of layer upon layer of compacted snowfall that contains dust, pollen, gas bubbles, and other materials that give us clues about what climate was like at different times in the past.

This activity was adapted from Vostok Ice Core: Excel (Mac or PC). 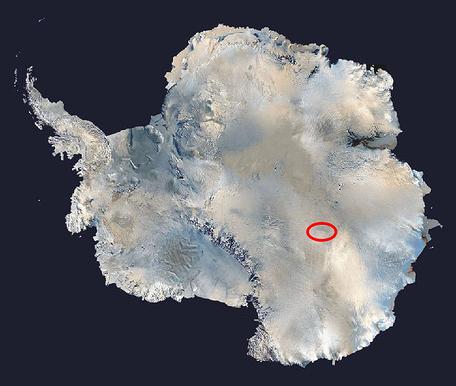 ×
Location of the Vostok Research Station in Antarctica.

Provenance: Image courtesy of NASA.
Reuse: This item is in the public domain and maybe reused freely without restriction.
Ice cores have been extracted from many locations around the world, primarily in Greenland and Antarctica. One of the deepest cores ever drilled was at the Vostok station in Antarctica, which includes ice dating back to over 800,000 years ago. The dataset you will use in this activity is from a core whose record goes back about 160,000 years and includes information about the depth in meters (m) of the ice core, the "ice" and "gas" ages in thousands of years ago (kyr), concentration of carbon dioxide found in the ice bubbles in parts per million by volume (ppmv), the hydrogen isotopic ratios, δD, given in parts per thousand (permille), and dust concentration in units of 10-9cm3g-1.

Several different climate indicators can be measured from samples of the ice:

The Vostok core was drilled in East Antarctica, at the Soviet station Vostok from an altitude of 3488 m, and has a total length of 2083 m. Ice samples have been analyzed with respect to isotopic content in 2H (δD), dust, and methane and carbon dioxide trapped in air bubbles. The profiles of 2H, methane, and carbon dioxide concentrations behave in a similar way with respect to depth in the core, showing a short interglacial stage, the Holocene, at the top, a long glacial stage below, and the last interglacial stage near the bottom of the core. The record goes back in time about 160,000 years.

Age is calculated in two different ways within an ice core. The ice age is calculated from an analysis of annual layers in the top part of the core, and using an ice flow model for the bottom part (the details of which are beyond the scope of this unit). The gas age data accounts for the fact that gas is only trapped in the ice at a depth well below the surface where the pores close up.

1: Does age increase or decrease down the core? Why?

2: Is the thickness of an annual layer of ice smallest at the top or bottom of the core? Why?

Part 2: δD as a proxy for temperature

Next you will calculate the temperature based on the isotopic composition of the water in the ice core.

4: Why are these ice core paleoclimate records so important to our understanding and prediction of climate change?

5: Note that there were two major warming events representing two deglaciations in the Vostok calculated temperature data. Look at how CO2 changes during those deglaciation periods. From the data provided in this lab, can you tell which changes first, temperature or CO2 concentration? Why is this important?

Although most of the planet's glacial ice is found near the poles, there are also many mountain glaciers near the equator that can provide scientists with different clues about Earth's climate history, particularly about climate events like El Niño and monsoons, which don't occur near the poles.