The Oceans and the Carbon Cycle 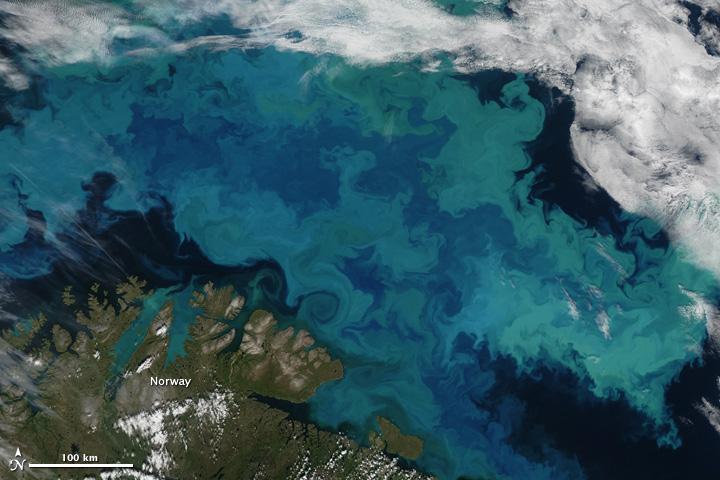 ×
Phytoplankton bloom in the Barent's Sea, off the coast of Norway

Show me more information about this phytoplankton bloom

Hide
Brilliant shades of blue and green explode across the Barents Sea in this natural-color image taken on August 14, 2011, by the Moderate Resolution Imaging Spectroradiometer (MODIS) on the Aqua satellite. The color was created by a massive bloom of phytoplankton that are common in the area each August. In this image, the milky blue color strongly suggests that the bloom contains coccolithophores, microscopic plankton that are plated with white calcium carbonate. When viewed through ocean water, a coccolithophore bloom tends to be bright blue. The species is most likely Emiliana huxleyi (Emily for short), whose blooms tend to be triggered by high light levels during the 24-hour sunlight of Arctic summer. The variations in bloom brightness and color in satellite images is partly related to its depth: E. huxleyi can grow abundantly as much as 50 meters below the surface. Other colors in the scene may come from sediment or other species of phytoplankton, particularly diatoms. The Barents Sea usually witnesses two major bloom seasons each year, with diatoms peaking in May and June, then giving way to coccolithophores as certain nutrients run out and waters grow warmer and more layered (stratified). (NASA)

There are many biotic and abiotic environmental variables factors that influence the formation of phytoplankton blooms. The most important ones include:

Begin exploring the importance of phytoplankton blooms by watching the NASA video "The Ocean's Green Machines."When you finish watching, answer the two Checking In questions that follow.

NOTE: You can also watch this video on Vimeo
.
Checking In 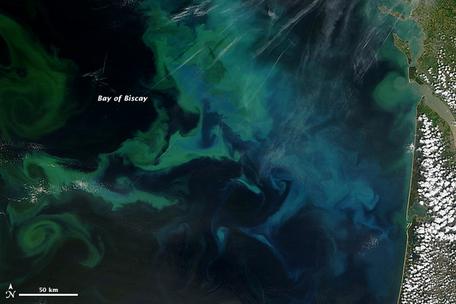 Provenance: NASA Earth Observatory
Reuse: This item is in the public domain and maybe reused freely without restriction.
Because phytoplankton blooms and the oceanic biological pump are important to climate, scientists are interested in studying: 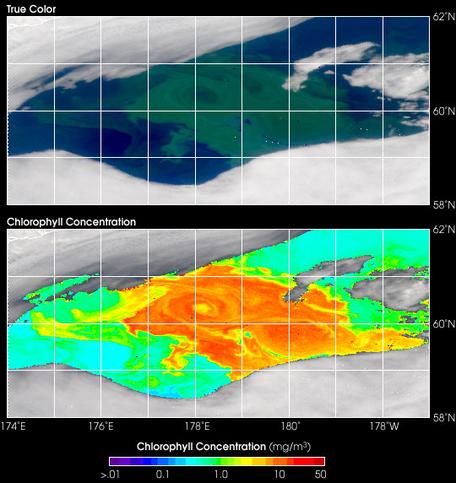 Consider the two different images of the same phytoplankton bloom in the Bering Sea taken by SeaWiFS on June 15th and 16th, 2000. Click to enlarge.

With a partner or your class, compare and contrast the two images. 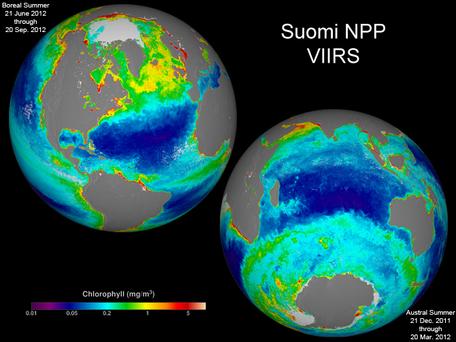 The ocean color false image on the right has been generated from chlorophyll data taken by one of NASA's newest satellite - the Suomi NPP satellite. This image allows you to compare phytoplankton blooms in the summer in the northern hemisphere to summer in the southern hemisphere. Click to enlarge the image and take a few minutes to carefully examine the images for where phytoplankton populations thrive and where they don't thrive.

Show me how to see these images in greater detail

Next, watch NASA's SeaWiFS Biosphere Data over the North Atlantic time series animation showing a decade of of phytoplankton blooms. Hint: You can identify seasons by looking at the land vegetation. For example, land vegetation appears in the northern hemisphere during summer. Then answer the Checking In questions that follow:

The oceanic carbon cycle and nitrogen cycle have an interdependent relationship

Nitrogen gas, in the form of N2, is very abundant in the atmosphere and dissolves in the sea surface water. However, marine organisms cannot use the N2 form.

Click through the Wood's Hole Oceanographic Institute's (WHOI) nitrogen cycle interactive below to get a sense of the role of microbes in making N2and other nitrogen compounds available to marine plants (phytoplankton) and food webs. 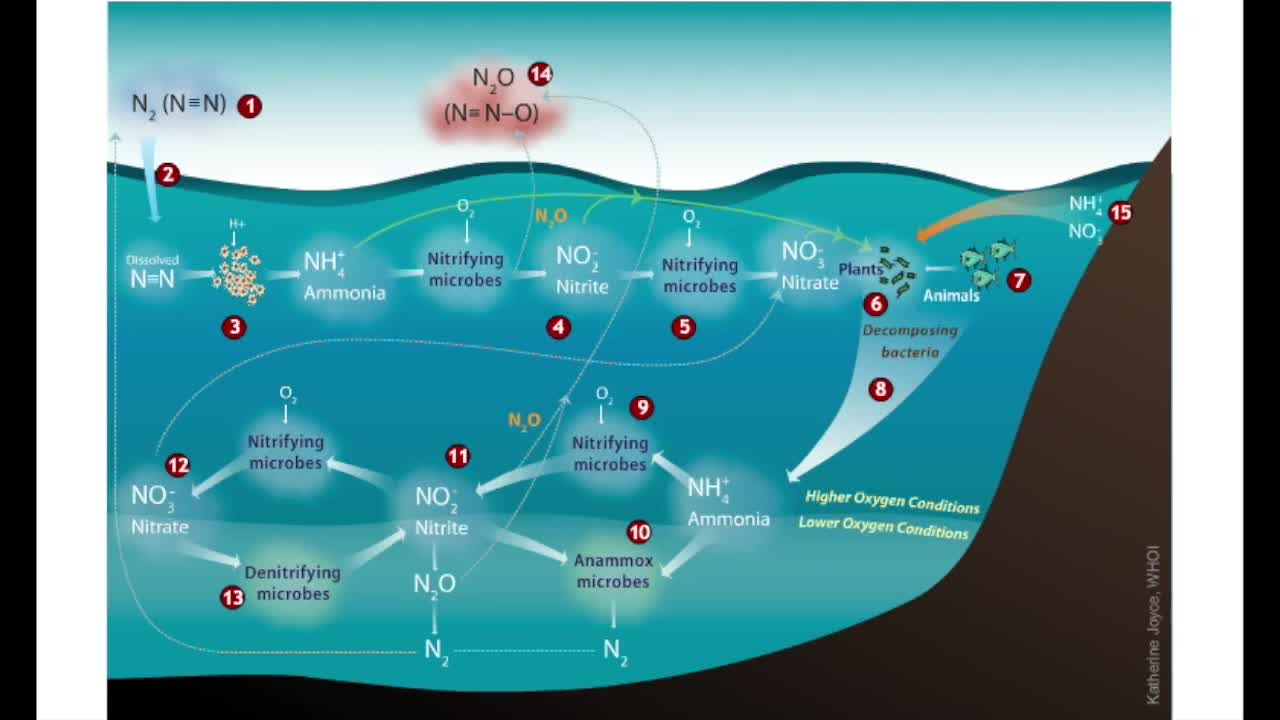 *This video replaces a Flash interactive for browsers/Android. 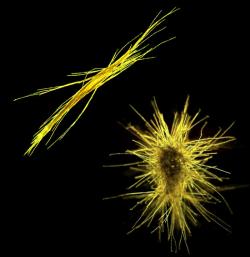 ×
Trichodesmium—Image credit: WHOI
When you studied soil in Lab 5, you learned that mycorrhizal fungi and tiny soil microbes have big roles in the terrestrial nitrogen and carbon cycle by making nitrogen and other nutrients available to trees and plants. Without fungi and soil microbes, trees and other plants could not grow and store large amounts of carbon. Tiny organisms also play a big role in the oceanic nitrogen cycle and carbon cycle.

Use the WHOI interactive below to investigate the role of the tiny cyanobacterium Trichodesmium in the nitrogen and carbon cycle and then answer the discussion questions below: 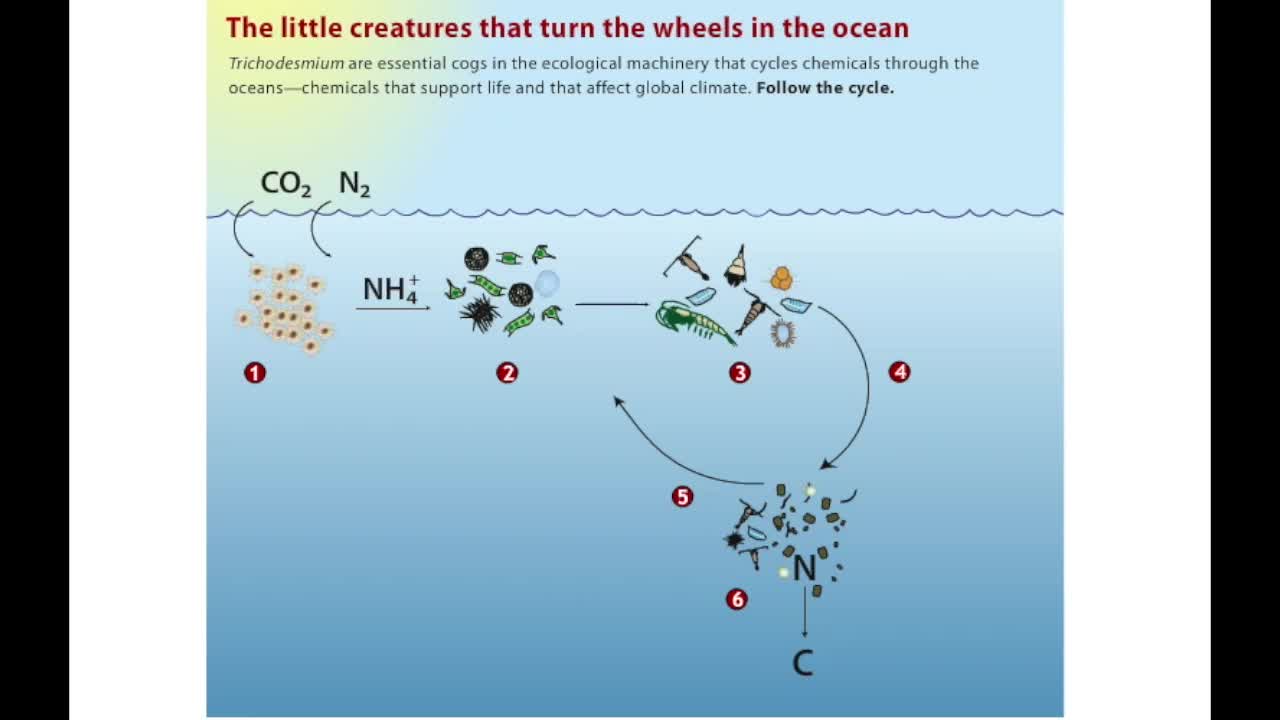 The Little Creatures That Turn The Wheels in the Ocean. from WHOI

*This video replaces a Flash interactive for browsers/Android.

With a partner or your group, think about and discuss the following:

1. Choose two of the environmental variables below and describe how they affect the size and distribution of phytoplankton blooms. 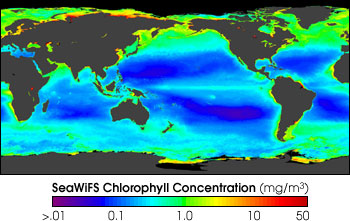 Provenance: NASA Earthobservatory
Reuse: This item is in the public domain and maybe reused freely without restriction.
2. Examine the image of ocean chlorophyll data on the right. Click to enlarge.

Want to learn more about oceans, phytoplankton blooms and nutrients? Check out these resources: