Oceans and the Carbon Cycle

Part A: Down to the Deep - The Ocean's Biological Pump 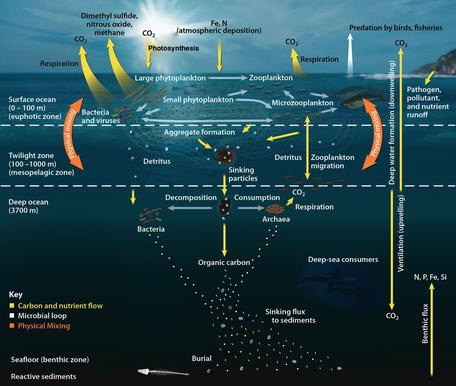 ×
The Ocean Carbon Cycle. Image credit: Oak Ridge National Laboratory
In this Lab, you will learn about the capacity of the ocean carbon cycle to absorb, transport, transform and store carbon. Important questions you will investigate will be:

Let's begin by looking at the detailed illustration of the ocean carbon cycle on the right. Click to enlarge. Although quite complex, you will see carbon cycle processes and biosphere components similiar to those you learned about when you studied the terrestrial carbon cycle in prior Labs.

Take a few moments to familiarize yourself with the ocean carbon cycle illustration and answer the questions below. 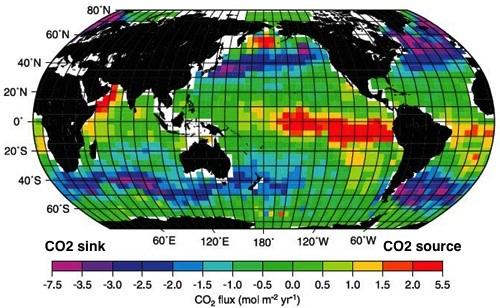 Provenance: IPCC 2007 assessment
Reuse: This item is in the public domain and maybe reused freely without restriction.

Once dissolved in surface seawater, CO2 can enter into the ocean carbon cycle through three different mechanisms:

In the physical carbon pump, carbon compounds can be transported to different parts of the ocean in downwelling and upwelling currents 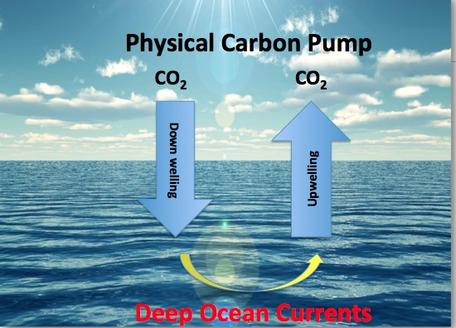 Provenance: candace dunlap
Reuse: This item is offered under a Creative Commons Attribution-NonCommercial-ShareAlike license http://creativecommons.org/licenses/by-nc-sa/3.0/ You may reuse this item for non-commercial purposes as long as you provide attribution and offer any derivative works under a similar license.
Downwelling occurs when surface waters converge (come together), pushing the surface water downwards; regions of low primary productivity because nutrients get used up and are not continuously resupplied by the cold, nutrient-rich water from below the surface. currents occur in areas where cold, denser water sinks. These downwelling currents bring dissolved CO2 down to the deep ocean. Once there, the CO2 moves into slow-moving deep ocean currents staying there for hundreds of years. 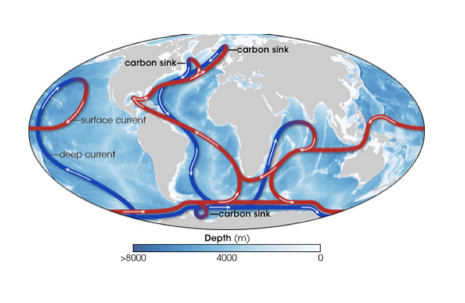 Provenance: IPCC 2007 assessment
Reuse: This item is in the public domain and maybe reused freely without restriction.
Re-examine the Ocean CO2 flux map and compare it to the Deep Ocean Conveyor Belt Map in the image above.

1: Describe the physical pump's role in enabling the ocean to be a carbon sink.

Phytoplanktonmostly microscopic, unicellular photosynthetic organisms that live in the upper sunlit layers of oceans and other bodies of water; mainly unicellular algae but also includes cyanobacteria. (Greek for drifting plants) are microscopic, one-celled organisms that drift in the sunlit surface areas of the world's oceans and are key to bringing carbon down into the ocean biological pump from the atmosphere via the process of photosynthesis.

Just like land plants, phytoplankton use chlorophyll and other photosynthetic pigments to capture Sun's energy for photosynthesis. Using light energy from the Sun, carbon dioxide, and important ocean nutrients such as nitrogen, phosphorus, iron and vitamin B, they convert the carbon dioxide and water into sugars and other carbon compounds. These carbon compounds enter the marine food web and some carbon eventually ends up in deep ocean currents and seafloor sediments. Phytoplankton return CO2 and O2 to the atmosphere when they respire. Over 50% of the world's oxygen needed by us to breathe is produced by phytoplankton.

Look at the simplified image of the oceanic biological carbon pump above right.

Phytoplankton are responsible for bringing carbon into the ocean planktonic food web which teems with small plankton as seen in this TedEd video, "The Secret Life of Plankton." As you watch the video, make note of:

The Secret Life of Plankton

Once in the food web, important food web processes such as feeding, producing waste products, dying and decomposing move carbon down into the twilight and deep zones in the ocean. When plankton and larger marine organisms eat, defecate, die and decompose, they produce sinking carbon-containing particles called marine snow.

Getting carbon into the ocean is one matter—getting it down to the deep ocean is another!

About 50 Gt (50 billion metric tons) of carbon is drawn down into the biological pump per year but only a small fraction of this carbon makes its way down into the deep ocean. (2007 IPCC Report).

To answer these questions, you will visit an interactive developed by Woods Hole Oceanographic Institute (WHOI) and then watch a video on the ocean's microbial loop.

The ocean carbonate system is essential to marine organisms such as coral, oysters, clams and lobsters building their shells 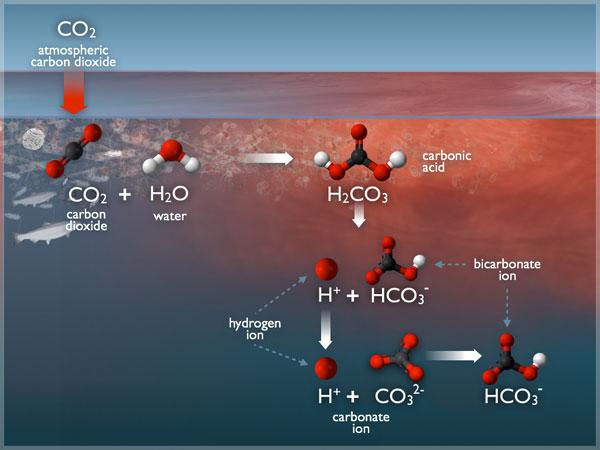 Provenance: WHOI
Reuse: This item is in the public domain and maybe reused freely without restriction.
The ocean naturally contains many dissolved chemicals which are especially important to the ocean carbon cycle and the shell-building organisms that live in the oceans. The ocean carbonate system is linked to the biological pump and plays a very big role in transporting carbon down to deep ocean sediments where it is stored for very long time scales of millions of years.

When CO2 dissolves in the ocean, it combines with water molecules and then enters into a series of reversible chemical reactions that produce bicarbonate ions(H+CO3-), hydrogen ions (H+) and carbonate (CO32-) ions. The carbonate ions are especially important to marine organisms because they combine with calcium ions (Ca2+) to form calcium carbonate (CaCO3). Shell-building organisms such as coral, oysters, lobsters, pteropods, sea urchins, and some species of plankton use calcium carbonate to build their shells, plates and inner skeletons.

Examine the image of the ocean carbonate system above right and then trace the pathway of carbon atoms from CO2 molecules to calcium carbonate (CaCO3) molecules. Now, take a big breath and then exhale. Describe how carbon atoms from the CO2you exhaled could end up in the shells of a shell-building organism such as a lobster or clam. 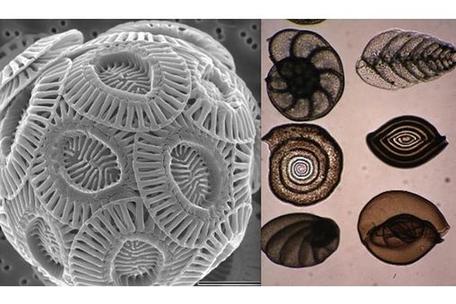 ×
Microscopic shells of coccolithophore and foraminifera

Provenance: Coccolithophore - Allison R Taylor (University of North Carolina Microscopy Facility) Micrograph of Foraminifera courtesy of Lynn M. Hansen, Great Valley Museum, Modeasto California.
Reuse: This item is offered under a Creative Commons Attribution-NonCommercial-ShareAlike license http://creativecommons.org/licenses/by-nc-sa/3.0/ You may reuse this item for non-commercial purposes as long as you provide attribution and offer any derivative works under a similar license.

Sinking shells bring carbon down to the deep ocean

When shell-builders die and sink, the carbon in their shells is transported down to the deep ocean where the carbon can become part of deep ocean currents and seafloor sediments. Many shells dissolve before reaching the seafloor sediments, a process that releases CO2into deep ocean currents. Shells that do not dissolve build up slowly on the sea floor forming calcium carbonate (CaCO3) sediments. Eventually, tectonic processes of high heat and pressure transform these sediments into limestone. This process locks massive amounts of carbon away for millions of years.

Some of the smallest shell-builders transport the most carbon down to seafloor sediments. Microscopic shell-building unicelluar coccolithophores tiny unicellular marine phytoplankton that live in large numbers throughout the upper layers of the ocean; build outer plates (shells) of limestone calcium carbonate(CaCO3) and foraminifera mostly microscopic, unicellular amoeboid protists that live in the ocean; produce shells of organic material, sediment grains, or calcium carbonate; can be found in just about every marine environment from the deep sea to shallow reefs, buried in sediment or floating in the water column. reproduce quickly when nutrients are available. When nutrients have been used up, trillions of these tiny shell-builders die and sink, bringing carbon down to the deep.

×
The White Cliffs of Dover

Provenance: http://www.flickr.com/people/fanny/ {{cc-by-sa-2.0}}
Reuse: This item is offered under a Creative Commons Attribution-NonCommercial-ShareAlike license http://creativecommons.org/licenses/by-nc-sa/3.0/ You may reuse this item for non-commercial purposes as long as you provide attribution and offer any derivative works under a similar license.
The White Cliffs of Dover on the coast of England pictured in the image on the right are a famous example of limestone calcium carbonate sediments that were deep under the ocean millions of years ago. Over very long time scales, tectonic forces have pushed these sediments above water. If you examined a sample of sediments from these cliffs, you would find shells of microscopic coccolithophores and foraminifera that lived, died and then sank to the sea floor millions of years ago. Over time, these sediment layers such as the White Cliffs of Dover eventually return carbon to the oceans by weathering and erosion.

2. Underline or circle the correct answer in the dichotomous choices in boldtype

Explain why you chose your answers.

3. Choose two of the following and describe their role in the ocean's biological pump.

4. How are marine phytoplankton and forests similar in their role in the carbon cycle?

Want to learn more about the oceanic carbon cycle? Check out these resources.