Earthquakes generate seismic waves that move through Earth. Changes in the speed of some of these wave help scientists learn about Earth's structure. In this step, you'll compare the types of plate boundaries with seismic shear wave velocities near them. You'll observe different types of plate boundaries around the world and the pattern of shear wave velocities near them.

Hide
Look at the Legend to the right of the map in My World or use the Get Information tool.

Hide
The plate boundaries show where plates are: 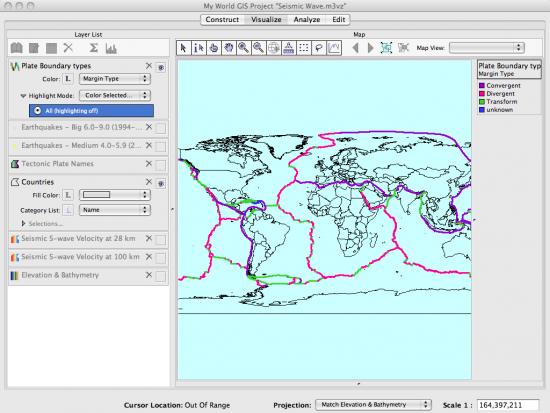 Show me the zones of interest

Hide
Note: the boxes drawn on the map are for reference purposes. Your map will not have these boxes on it. 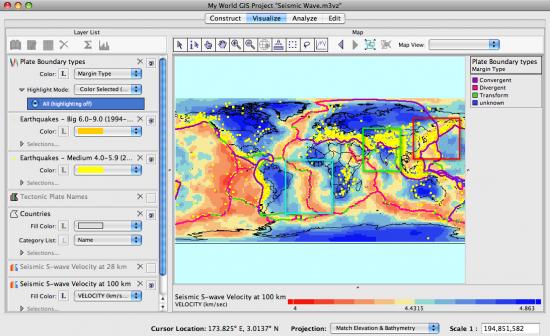 Hide
Note: The colored box on map is for reference only. It will not show up in My World. 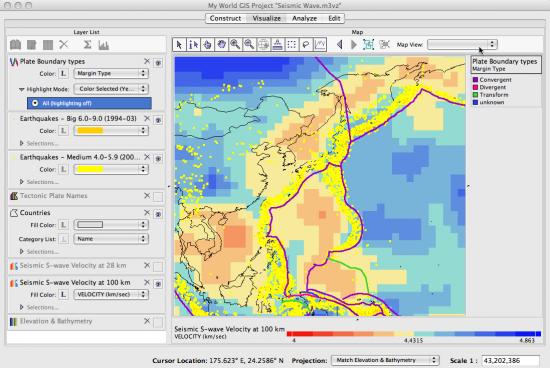 Hide
The majority of earthquakes are on the western side of the boundary.

Hide
Think about how the plates here are moving at this convergent boundary. Consider the three dimensional shape of the boundary and what you would find deep below the surface on each side of it. Which side of a subduction zone would you expect to have lower density (and therefore, slower shear wave velocities) overall? On which side of the boundary is a plate being subducted?

You may want to examine shear wave velocities near other locations along this plate boundary to see if the relationship you discovered holds true.

Show me the area

Hide
Note: The colored box on map is for reference only. It will not show up in My World. 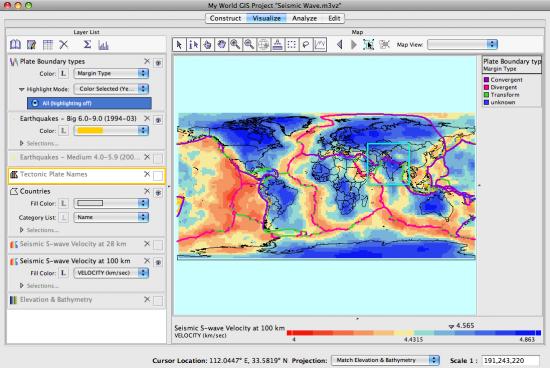 Hide
India is on a continent rather than an island in the ocean.

Hide
The Himalayas, the largest mountain chain in the world.

Hide
No. The majority of earthquakes are on the northern side, under the Himalayas.

Hide
Because this is a convergent boundary between two continents, mountain building is occurring. The reason that the earthquakes are to the north of the actual plate boundary is because the subducted slab is contacting the base of the crust north of the plate boundary. This is where the earthquakes are generated. The reason that the velocities are faster in India than below the mountains is because at this level (100 km), under India we are well into the mantle while under the mountains we are just crossing into the mantle.

Step 4 – Examine Data in the Mid-Atlantic

Show me the area

Hide
Colored box for reference only. It will not show up on the My World map. 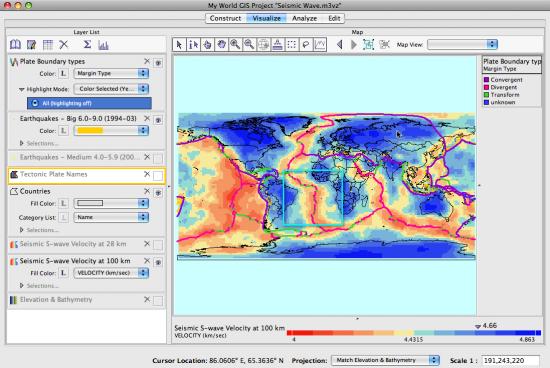 Hide
There is a Divergent boundary in the Mid-Atlantic. 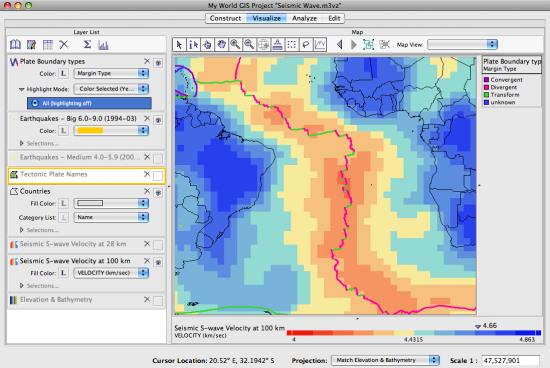 Hide
Yes, the velocities are similar on both side of the boundary.

Hide
The earthquakes are evenly distributed on each side of the plate boundary.

Hide
Think about how the plates are moving in relation to each other at this divergent boundary. Would you expect to find any differences below the surface of a spreading center?

Hide
Because this is a divergent boundary (spreading center), each side of the boundary is similar in material and plate movement. This causes the shear wave velocities and earthquake patterns on both sides of the boundary to be similar.