Note: This chapter was retired in October 2018. The visualization tool (My World GIS) is no longer supported. 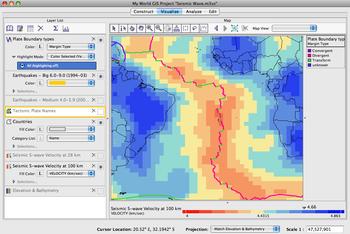 This close-up image shows velocities along the Mid-Atlantic Ridge between South America and Africa.

This image shows a sample output from My World GIS for this chapter. Click the thumbnail for a larger view.

Examples of datasets that can be investigated with the techniques of this chapter include: earthquake activity; watersheds, elevation and bathymetry; global land and sea surface temperatures. Any other datasets with latitude and longitude coordinates, such as those gathered with a GPS, could be analyzed in a GIS.

In the context of plate tectonics, this chapter explores the relationships among a seismic shear wave velocity model, earthquake epicenters, and tectonic plate boundaries. Although it deals with how a solid Earth dataset can be used within a geographic information system (GIS), many of the chapter's procedures can be applied to other datasets.

The primary goal of this chapter is to graph the changes in seismic shear wave velocities across the North American continent. The relative changes in wave velocity indicate density differences between Earth's crust and upper mantle.

This chapter can be used in conjunction with other plate tectonic investigations included in the Earth Exploration Toolbook.

Teaching Resources
Completed files for this chapter can be downloaded from the links below. These files can be used as teaching resources or as a way of checking student work.
Right-click to save these files to your desktop. They do not need to be un-zipped before using in My World.

Funding for this chapter was provided by the Geosciences Cyberinfrastructure Network (GEON) project which is creating a cyberinfrastructure for the geosciences. This material is based upon work supported by the National Science Foundation under Grant No. 225673 (GEON). Any opinions, findings, and conclusions or recommendations expressed in this material are those of the author(s) or originators and do not necessarily reflect the views of the National Science Foundation.