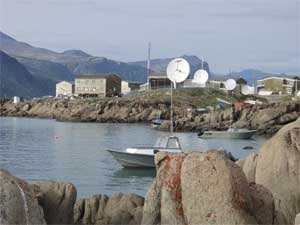 Satellite dishes along the shore. 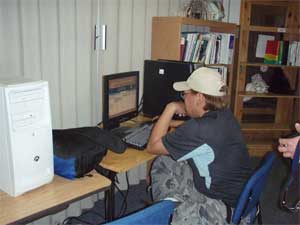 Thanks to an efficient satellite connection to the Internet (and some nimble students), the team downloads the sea ice images to their local computers. They animate the images to show the changes in seasonal sea ice extents over the past 30 years and excitedly share what they see in the changing "seasons of ice." The elders in their village have said that in recent years, the ice is leaving earlier each spring and returning later each fall. The satellite images they see on their computers confirm native knowledge!

The fields will come in as grayscale images. Adding a color scale that differentiates between ice and water will help you visualize the extent of the sea ice. To begin, you will download and apply a color scale (also called a look-up table or LUT) prepared by Dr. Walt Meier.

The seaice_lut color scale shows a gradual change from blue (0% ice) to white (100% ice). Land areas are shown in green, coastlines are outlined in black, and areas where data are missing—the "pole hole"— are gray.

Show me how the images look with the prepared LUT 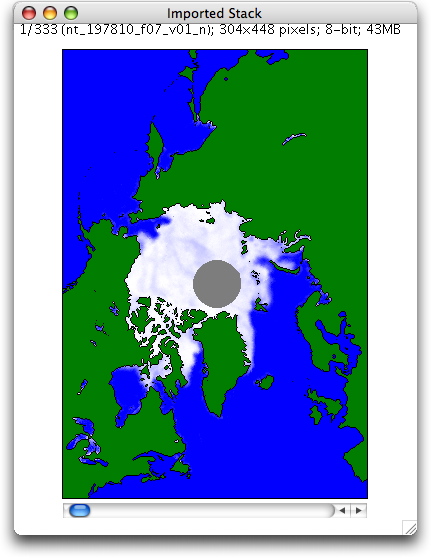 To get an overview of monthly sea ice changes, you will animate this stack of 333 satellite images to make a mini movie. This will allow you to review nearly 20 years of data in a matter of minutes. Enjoy the show!

Show me how to get the quicktime movie converter plug-in 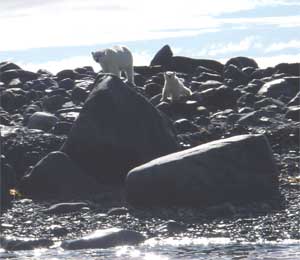 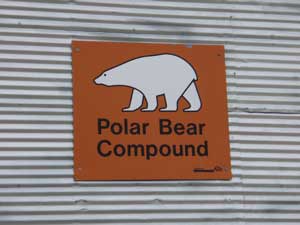 
Churchill, Manitoba is on the western shore of Hudson Bay. It is home to a large population of polar bears. Myana and her classmates from Colorado want to know more about the polar bears. Susan and her students explain: "Polar bears need sea ice to survive—they travel over the sea ice to hunt for seals and other prey that live on the ice. Polar bears are good swimmers, but they need to have ice nearby to rest on or they can drown. Churchill is a region that is ice-covered in winter, but is ice-free through much of the summer. The polar bears must wait on land through the summer for ice to return before they can head out to hunt. They usually have to wait from July to November without hunting. That's why they get so hungry! During this time, they have to look for alternate food sources. This draws them into town and can cause trouble for everyone."

Show me the journal reference for this information

Polar bears depend on sea ice for survival. Climate warming in the Arctic has caused significant declines in total cover and thickness of sea ice in the polar basin and progressively earlier breakup in some areas. Inuit hunters in the areas of four polar bear populations in the eastern Canadian Arctic (including Western Hudson Bay) have reported seeing more bears near settlements during the open-water period in recent years. In a fifth ecologically similar population, no changes have yet been reported by Inuit hunters. These observations, interpreted as evidence of increasing population size, have resulted in increases in hunting quotas. However, long-term data on the population size and body condition of polar bears in Western Hudson Bay, as well as population and harvest data from Baffin Bay, make it clear that those two populations at least are more likely to be declining, not increasing. While the ecological details vary in the regions occupied by the five different populations discussed in this paper, analysis of passive-microwave satellite imagery beginning in the late 1970s indicates that the sea ice is breaking up at progressively earlier dates, so that bears must fast for longer periods during the open-water season.

Thus, at least part of the explanation for the appearance of more bears near coastal communities and hunting camps is likely that they are searching for alternative food sources in years when their stored body fat depots may be depleted before freeze-up, when they can return to the sea ice to hunt seals again. We hypothesize that, if the climate continues to warm as projected by the Intergovernmental Panel on Climate Change (IPCC), then polar bears in all five populations discussed in this paper will be increasingly food-stressed, and their numbers are likely to decline eventually, probably significantly so. As these populations decline, problem interactions between bears and humans will likely continue, and possibly increase, as the bears seek alternative food sources. Taken together, the data reported in this paper suggest that a precautionary approach be taken to the harvesting of polar bears and that the potential effects of climate warming be incorporated into planning for the management and conservation of this species throughout the Arctic.

Show me where I can download a prepared stack

Hide
Though it's a valuable skill to be able to subsample a full dataset to produce a file that contains images from only one of the 12 months, this task has been completed for you for this example.

Show me the new stack 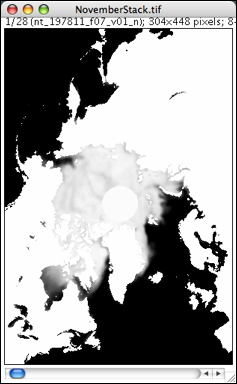 Sea Ice Extent is used instead of Sea Ice concentration for two reasons:

1. It makes for a simpler analysis. Every grid cell (pixel) in an extent image is either ice or no-ice. The total region covered by ice can be calculated by counting up all the ice pixels and multiplying by the area represented by each pixel (625 square km). If concentration were used, each grid cell would first need to be multiplied by its specific percent concentration to calculate the amount of ice.

2. For the satellite records from 1978-present, two different sensors were used. Their characteristics differ slightly, most notably for this discussion, in how near to the pole they can obtain data. The older sensor is not able to get any data north of 83 degrees latitude; the newer one can obtain data up to 87 degrees latitude. For the past 20 years, it is reasonable to assume that any region north of 83 degrees latitude is substantially covered with ice throughout the year. Thus, we can assume that the "pole hole" where the sensors do not obtain data is "ice-covered." This allows extent estimates to be continuous over the whole record. However, if concentration were used, we would not know the concentration of ice for areas in the "pole hole," so our record would be inconsistent.

Show me more about concentration versus extent

Hide
The following pages from NSIDC explain more about the science of remote sensing of sea ice.

As discussed above, it is more appropriate to investigate extent, the region covered by at least 15% ice, instead of concentration. To convert to extent, you'll Threshold the image to select only those pixels with concentrations of ice from 15-100%. Thresholding highlights the pixels of interest in red. 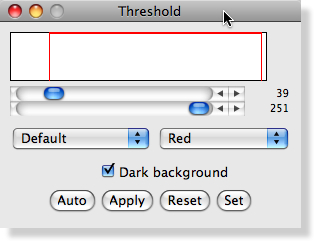 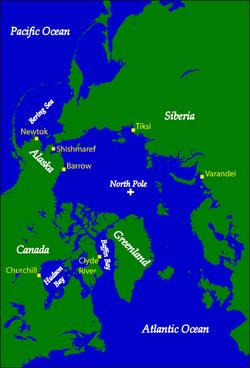 Map of the Arctic with villages of interest labeled. Map courtesy of Dr. Walt Meier

Show me the polygon tool

To make a Polygon selection single click on the Polygon tool (circled), return to your image and click around your area of interest. ImageJ will only analyze the pixels within your selection.

Show me a sample selection 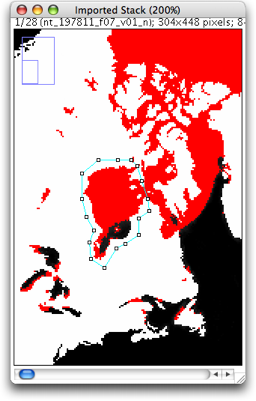 November Stack with thresholding applied and Hudson Bay selected. Once you have completed your selection you will have an outline around Hudson Bay as shown in this image. Be careful not to select areas too far from Hudson Bay where there are other lakes. 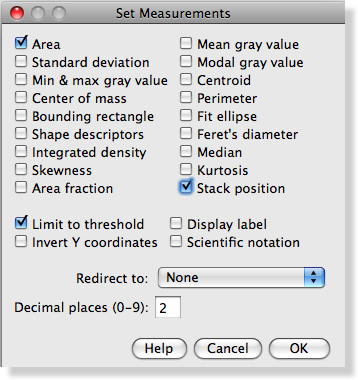 When you have measured all 28 slices, save your Results so you can bring them into Excel for graphing.