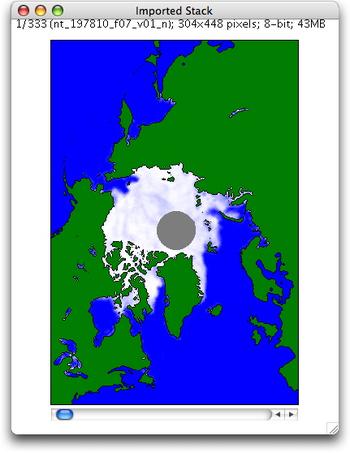 Sea Ice Data from National Snow and Ice Data Center can be animated and analyzed with ImageJ.

This activity is designed to familiarize educators with techniques for accessing and analyzing sea ice data. It may also be used for students in grades 7-12.

Although the student chapter introduces what appears to be a limited question, "What has happened to the sea ice in your village in the Arctic?" this lesson can be expanded and customized in order to support many other science topics and curriculum standards. Some possibilities of further exploration and application are listed below. 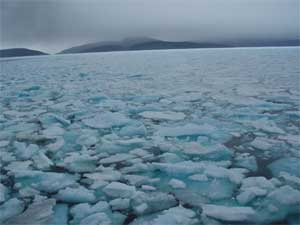 
The area of ocean water covered by sea-ice in the Arctic has decreased dramatically since the 1960s. The September minimum has decreased over 8 percent per decade, or over 20 percent since the late 1970s. This decrease amounts to an area of the size of Alaska or twice the size of Texas. The thickness of the ice has also been reduced: estimates show that thickness has decreased between 20-40 percent or more. The Sea Ice Primer at the National Snow and Ice data center gives an excellent overview.

In September 2007, the sea ice reached a record low. To view the latest information visit the National Snow and Ice Data Center Pressroom.

The impacts of this decrease of Arctic sea-ice coverage are widespread and significant. These impacts include increased surface air temperatures, decreased salinity of ocean water, changes in habitat for marine mammals, and an increase in coastal erosion.

The thinner, less extensive sea ice makes the coastal areas more vulnerable to storm damage and coastal erosion. Therefore, some indigenous peoples in coastal villages are being forced to relocate to higher ground. In addition, native communities rely on the sea ice for hunting and transportation. The sea ice is an intimate part of their culture and changes in sea ice are already having an impact on their native way of life. Not only are villages at risk, so are major oil facilities. In Alaska, the villages of Shishmaref and Newtok are in the process of moving their villages to new locations. In Russia, an oil storage facility near the village of Varandei is also at risk. National Geographic's June 2007 Article, The Big Thaw, provide a graphic picture of the impacts on the Arctic region. 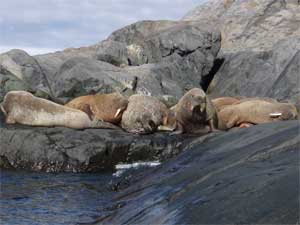 Not only does the loss of sea ice affect the physical environment, it also impacts the biological world. Sea ice is a rich breeding ground for plankton and other small life forms that are the foundation of the entire food chain in the polar regions. Animals such as the polar bear, walrus and seal depend on sea ice to provide a platform from which to hunt and rest. These animals must now travel much greater distances across an open ocean before they find ice. The stress of this additional challenge to the animals of the Arctic has resulted in lower reproduction rate. Negative consequences extend beyond the immediate food chain to humans who depend upon the resources that these animals provide for their subsistence lifestyle. The loss of the sea ice jeopardizes the entire Arctic community, from the tiniest plankton to the greatest polar bear.

Additional comprehensive background information and images can be found in this NASA Earth Observatory Article—Sea Ice (2009).

In order to catch the students' attention, begin the lesson with either a brief news article from a recent publication or a short video clip on the topic. Two resources for these are NSIDC News and the NOAA Arctic Change page. Other resources can be found in the Background Information and Going Further sections.

Once the students are engaged in the topic, and have reviewed sufficient background information, introduce the role-play scenario. Together, find Churchill on a map and discuss where it's located in the Arctic.

Initial Grouping: Whole Class
The lesson begins with the whole class and the initial case study dilemma focused on Churchill as an example village.

Subsequent Lessons: Small Group Expert Teams
After the students measure and plot the change in the sea ice in the Churchill region, small sub-groups can use the Internet and Arctic information to determine what this change might mean for another village. In order to accomplish this jigsaw, re-divide the students into small (3-6 person) expert teams to take on the roles of different people who are investigating and presenting the sea ice dilemmas from their own village's perspective. Each sub-group of students would then work with ImageJ and Excel to examine more local sea ice data. Suggested villages are drawn from the Arctic Climate Impact Assessment and listed in Part 5 of the lesson and Going Further.

This investigation can lead students in many directions. Although students begin the lesson by examining the impacts of receding sea ice extent, they will end up discussing a wide variety of subjects and questions that emerge as a result of global warming's impact on the Arctic.

The contexts or subject areas that this chapter is suited for are also broad. The chapter can take any one of three directions, human, biological, or physical. The outcome of the discussions will be guided by the parameters set by the individual instructor.

Five to seven 45-minute periods will be needed to fully complete the case study and all exercises. Times will vary depending on prior knowledge and skills.

*Note that while both Parts 5 and the Assesment are optional, they make the case study more complete. To save class time, students could complete these parts as homework, writing a paper instead of making an oral presentation.