A Visit to the NSIDC

The early morning departure from the small town school in the mountains of Colorado was in the total darkness. As the van with the students and their science teacher sailed smoothly down the highway, Myana, a junior at Colorado Mountain School, gazed out the window into the darkness, too excited to sleep. 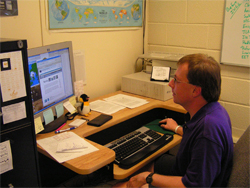 Dr. Walter Meier at his desk in Boulder, Colorado.

She thought to herself, "Our scientific journey to the Arctic has begun!" Today, she and her classmates would be meeting Dr. Walter Meier, a research scientist at the National Snow and Ice Data Center (NSIDC) in Boulder, Colorado, who is studying sea ice. This meeting was the prelude to their journey to the Arctic Village of Churchill, Manitoba where local students and teachers are exploring explanations for the delayed return of sea ice in recent Novembers. A student team in Churchill extended the invitation to Dr. Meier and Myana's class to visit their village school. The students in the Arctic hope that the visit will help them get started with a project to download sea ice and temperature data from the Internet and analyze it to help make decisions about the future of their own village.

Before embarking on today's trip, Myana and the other students learned about the National Snow and Ice Data Center (NSIDC). The NSIDC manages information about all things frozen—these include snow, sea ice, glaciers, ice sheets, and permafrost. NSIDC's data is collected by satellites as well as by people working out in the field. Myana and her classmates have also read about Dr. Meier and his work in publications such as the National Geographic and the New York Times. They feel that it is quite the honor to be meeting him. After several hours of traveling, the students arrive at the NSIDC, park their van, and grab their notebooks. The NSIDC is an exciting place, abuzz with scientists, computers, and lively discussions about research on all aspects of the cryosphere—another name for Earth's frozen regions.

While winding their way through the maze of offices, scientific posters, and displays in search of Dr. Meier's office, the group savors the atmosphere of excitement for science at the NSIDC. They arrive and find Dr. Meier hard at work at his computer. After quick introductions, Myana inquires about his role in this research community.

He replies, "Specifically, I study sea ice and its role in climate, primarily using data collected by satellites. I have long been interested in science and in the environment because I enjoy trying to understand how things such as the Earth function. I first became interested in sea ice and climate during my early years of graduate school. I found sea ice to be fascinating because of the remote locations where it is found and because of its unique nature and importance to climate." 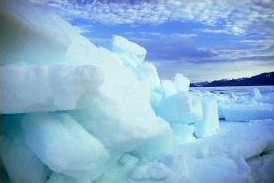 "What is sea ice and why is it important?" Myana asks Dr. Meier. He explains that "sea ice forms from frozen ocean water and acts as a lid on the ocean, keeping the heat and moisture of the ocean from moving to the atmosphere. Sea ice is also much more reflective of sunlight than the ocean. Therefore, most of the solar energy, when the sun shines on sea ice (which may be only a few months a year in some places) gets reflected back to space instead of being absorbed. Both of these effects help keep the Arctic and Antarctic regions colder than they would be without ice. This affects the global atmospheric and oceanic circulation as well as the weather and climate around the world." Seeing that the students haven't yet learned very much about sea ice, Dr. Meier directs them to an excellent resource to learn more: NSIDC's State of the Cryosphere page on sea ice

After a quick tour of the building, Dr. Meier shares his most recent research findings, including a dramatic animation of sea ice (Quicktime Video 2.1MB Jun21 07) that he put together from satellite images. Dr. Meier summarizes the animation and graphs: "Sea ice in the Arctic has been changing dramatically over the past few decades. It's possible that in the very near future, possibly as soon as the year 2040, the Arctic may become completely free of sea ice during the summer. This would be the first time this has occurred in thousands of years, perhaps 800,000 years or more. The record-breaking changes that are projected make my research very exciting."

He pauses, looks away at the posters of the Polar wildlife on his office walls and then continues. "Though the research is exciting," he says, "the trends I'm seeing are also very worrisome. Changes in the sea ice will have profound impacts on climate, wildlife, and human populations in the region. Some animals such as polar bears could go extinct, and native peoples' culture and traditions may be lost."

"It is my opinion," Dr. Meier clarifies, "that while some changes may be positive, the overall impact of having less sea ice each winter season is likely to be negative. The changes we are observing in the Arctic sea ice are the first local signs of global changes that will occur due to global warming. Global warming and climate change are a big problem."

It has been an informative and exciting day. Myana can hardly wait to get to her computer to explore more information about sea ice and global warming. She's thinking about posting her findings in her blog. All the students thank Dr. Meier for his time and return to their school. They're anxious to continue their study of sea ice and prepare for their journey to the Arctic.

Journey to the Arctic 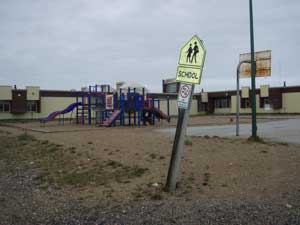 Elementary school in Churchill.
Several weeks later, the students and Dr. Meier embark on their journey from Colorado to the Arctic. After a long flight from Ottawa, Canada, the Colorado students and Dr. Meier arrive in Churchill, Manitoba. They are greeted by their guide and host, Thomas, a local college student who is working on his degree in computer science. He's very anxious to be involved in this project. First, everyone takes a tour of the town and the Polar bear "jail." The tour ends at the school. There, the group is joined by the rest of their new project team. The Churchill team is lead by a local teacher named Susan. She introduces herself and the students who will be collaborating on the project. She leads students through the same instructions that you will follow.