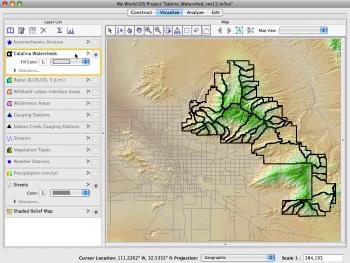 
Both My World GISTM and Google Earth maps are used in this chapter. Students use the maps to investigate streamflow and precipitation relationships in the vicinity of Tucson, AZ. 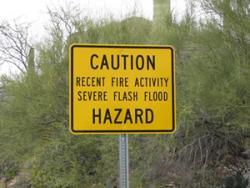 This sign was posted at Sabino Canyon recreation area shortly after the Aspen Fire of 2003. Flash floods have always been a natural part of the evolution of the canyon, but since the fire the magnitude and frequency of flash floods has increased. (Photo by A. K. Huth, Science Education Solutions.)


The Aspen Fire of 2003 burned 85,000 acres of National Forest in the Santa Catalina Mountains of southern Arizona (near Tucson) and destroyed the mountain community of Summerhaven. Sabino Creek, whose headwaters originate in the Santa Catalina Mountains and drain into Sabino Canyon (a National Recreation Area in Tucson), consequently experienced record runoff and debris flows during the monsoon season immediately after the fire, and larger, more damaging debris flows during the 2006 summer monsoon season. These debris flows ultimately forced officials to temporarily close the popular recreation area due to the mass destruction and hazards to visitors in the canyon. Several researchers at the University of Arizona began post-fire hydrology research projects at the burned and surrounding areas, addressing issues such as increased runoff volume, runoff chemistry, soil hydrophobicity, and sediment load. Biologists at the U.S. Fish and Wildlife Service also studied and worked to save the Gila chub, a fish that is a candidate for the Endangered Species list.

Wild fires are a natural and essential part of the evolutionary progression of a forest and watershed. They can help clean up undergrowth and provide nutrients to the soil, repel non-native trees and other plant species, and improve grazing for livestock by encouraging the growth of natural grasses. However, historic fire suppression and consequent fuel build-up during the last century have resulted in some large-scale wild fires that completely destroyed landscapes and communities. These large-scale forest fires have become increasingly frequent over the past decade as compared to the last century during wetter conditions in the Southwest. This trend may be caused in part by more intense climate-related events, including severe droughts. Post-fire rainy seasons in the southwestern U.S. may pose the biggest threat to communities, both human and wildlife, because of the potential for record runoff events and the resulting mud and debris.

The learning context of this activity is mainly an exploration in hydrologic and environmental science. Students will explore the temporal fluctuation in discharge in Sabino Creek using USGS stream-gauge hydrographs represented as point locations on the map. Patterns in the hydrographs will be compared to spatial precipitation and watershed data to hypothesize about the expected relationship between these variables.

Four to five classroom periods will be needed to fully complete the activity. The times below are approximate and will vary depending on prior knowledge and skills.