Case Study: An Introduction to Watersheds

What Makes a Watershed ? 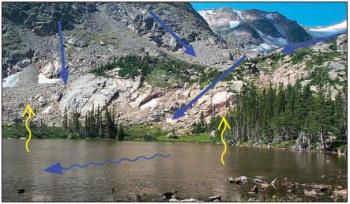 Everyone lives in a watershed, and a watershed goes by many names. It is often referred to as a drainage basin, river basin, subbasin, catchment, subcatchment, or subwatershed. No matter what name it goes by, the definition is still the same—an area of land that ultimately drains downslope to a common outlet. Water enters watersheds from rainfall, snowmelt, glacial meltwater, or from water draining a higher-elevation, smaller watershed. Water can move both across the land surface and underground, eventually flowing into a drainage such as a stream. With distance downstream or downslope, the drainages from small, adjacent watersheds converge to form larger streams, rivers, or lakes. Eventually, this water enters a large body of water such as the ocean, a gulf, an inland sea, or a freshwater lake.

Sometimes these watersheds are closed, meaning that the water drains to an inland body of water, such as a lake or inland sea, and cannot exit the watershed except by evaporation, causing the remaining water in the lake or sea to become very salty. An example of this type of watershed is the Dead Sea. Most watersheds, however, eventually drain to the ocean.

If you point to any location on land on a map, all the land area that drains water to that particular point defines the watershed for that location. The imaginary line that both defines the boundary of a watershed and separates two adjacent watersheds is called a divide. The "V" shape that is formed where two streams or rivers merge always points downstream, as shown in the figure below.

Schematic illustration of a watershed and its divide, drainages, and outlet. The shaded area represents the entire area that contributes water to the outlet location, which defines the watershed and its boundary. The headwaters represent the beginning of streamflow, and they channel into the watershed's main drainage. The V shape, which forms where streams merge, points downstream. Therefore the direction of streamflow in this watershed is from northeast to southwest.

In this exploratory investigation, you will have an opportunity to discover a semi-arid watershed in the Southwest—the Sabino Canyon watershed.

Sabino Canyon has often been coined an "oasis in the desert" because it contains an ephemeral stream, a multitude of riparian trees, plants, and wildlife, and an escape from the surrounding hot, dry desert. The water in Sabino Creek is derived from runoff during summer monsoons and from snowmelt in winter. The discharge, or streamflow, in the creek can vary between just a few cubic feet per second to tens of thousands of cubic feet per second during flash floods.

The canyon has experienced its share of major disturbances in the past. In 1887, a large earthquake in northern Mexico shook the area and brought down huge boulders in the canyon. Flooding is another natural disturbance in the canyon, due to the creek's variant, seasonal flow. However, the creek experienced record runoff and debris flows during the monsoon season immediately following the Aspen Fire of 2003. The waters ran black with soot and soil, and some aquatic species were at risk of dying off, including the Gila Chub, a fish that is a candidate for the Endangered Species list. As a result, the Sabino Canyon Recreation Area was closed for a month after the fire. More than one million people visit Sabino Canyon each year.