Exploring Monsoon Precipitation and Streamflow in a Semi-Arid Watershed 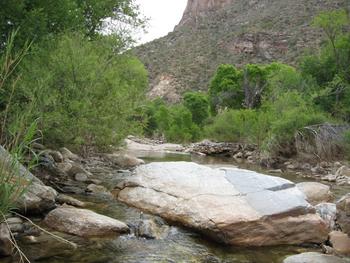 In this chapter, you will learn about a small, semi-arid watershed in the mountains near Tucson, Arizona. Utilizing Google Earth and My World GISTM will enable you to explore the location, topography, and landscape of Sabino Canyon and nearby watersheds. You will also discover the nature of monsoon precipitation in the Southwest by using movies of NEXRAD radar data and by animating storm development and migration on a typical summer afternoon in southern Arizona. As the activity progresses, the relationship between precipitation and streamflow in a semi-arid environment will be explored, and you will learn a little something about how streams respond to summer thunderstorms.

The southwestern U.S. experiences what is called the North American Monsoon during the summer months, typically lasting from early July through early September. This monsoon development brings much-needed moisture to the desert in the form of localized, thunderous downpours with amazing light shows. This rainfall causes rivers and streams to respond and flow again after dry periods. Streams that remain dry during dry weather conditions and that flow again during wet conditions are called ephemeral streams. Sabino Creek, the creek that drains the Sabino Canyon watershed, is one such stream.

By the end of the activity, you will have a better understanding of the "normal" versus "unusual" patterns of rainfall in a semi-arid watershed, and how an ephemeral stream responds to these patterns. In addition, you will also strengthen your skills using spatial visualization tools such as Google Earth and My World GISTM.