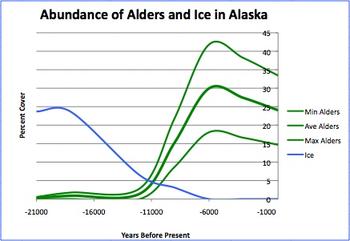 
This graph illustrates the expansion of Alders and the retreat of a relatively minor amount of ice sheet coverage in Alaska over the past 21,000 years. The data was collected from the time series of maps available at the Pollen Viewer website.

This activity is appropriate for grades 9-12.

Have you ever wondered if the trees in your backyard have always been there? Although plants don't actually move, the wind, birds, and insects distribute their seeds, which allow new trees to grow in different areas. To pollinate the flowers that produce the scattered seeds, many plants release large amounts of pollen in the air. Some pollen gets buried and preserved in sediments of nearby lakes, ponds, swamps, and bogs. By sampling the sediments and extracting this pollen, scientists can track the movements of plant species around North America.

The goal of this investigation is to measure how plant populations change over time in an area of personal interest. In this chapter, students create graphs of plant abundance over time for selected areas based on a time series of maps to answer questions like the one asked in the first sentence.

Data exist in numerical, written, and image form, and, in any form, data are the backbone of scientific research. In this activity, we will be dealing with numerical and image data. Two common tools to visualize data are maps and graphs. Maps display the spatial relationships within a field of data. Graphs show the time trend of variables or the relationship between variables. We will be taking advantage of digital versions of maps so that the numerical data used to create the colors of maps may be recovered using software tools and then graphed to study time trends. 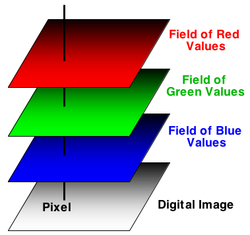 A pixel, or picture element, is the smallest "piece" or tile of a digital image with uniform color. The color of a pixel at a specific location is based on data, either in the form of light intensities hitting a camera sensor or mapped fields of data. In this activity, data of the abundance of plant species across North America have been used to make a time series of color digital maps that illustrate how plants have responded to changing climatic conditions across North America since the end of the most recent Ice Age 21,000 years ago. Each color represents a percentage of abundance of the plant relative to all others found in the area.

Student preparation should include exposure to maps of the North American continent and familiarization with the life cycle of plants, including pollination and seed distribution, deposition—the settling of particles that have been transported by air, wind, or water—and stratigraphy—the study of deposited particles—within still bodies of water, such as lakes and bogs.

This chapter can be completed either in a classroom setting or in a computer lab, but computers allow for easier manipulation of maps, data, and graphs, and result in a more interactive activity. Teacher-led discussions can help introduce each analysis activity and reinforce the concepts when viewing the maps and graphical output.

If completing the chapter activities in a classroom, a large display or computer screen should be available so that all of the students can see the graphs as they are created.

Distributing printed copies of the Step-By-Step Instructions will assist students in completing the activities presented in the chapter and reduce the need to view the instructions on the screen while completing each step.

Note: This activity was developed by Becca Kranz when she was a high school freshman working as an intern at the Museum of Science, Boston. See Becca Kranz's article that includes her analysis of Alders in Quebec.

This chapter demonstrates how to engage in scientific inquiry by analyzing scientific data on plant populations. It introduces the concept of Earth system responses to climate change: plants redistribute, ice sheets expand or contract, and sea level changes.

To assess whether students have been able to create the graph illustrating the change of plant populations over time, compare the graphs produced by students with the example graphs in this chapter.

To assess students' understanding of the concepts presented in this chapter, ask students to:

Teaching Resources
This completed Microsoft Excel file can be used as an example.