This chapter demonstrates how to analyze and compare CCSM model runs, available through the GIS Climate Change Scenarios portal, in a GIS. This demonstration used one variable, air temperature, and compared simulations of a present-day climate to a projected climate of 2030.This same analysis can be applied to other scenarios, variables and time periods that are available from the CCSM and the GIS portal. In addition, within a GIS framework, additional spatial information such as land use/land cover change, population projections, or any other environmental and social spatial data of interest can be used for climate change impacts studies. 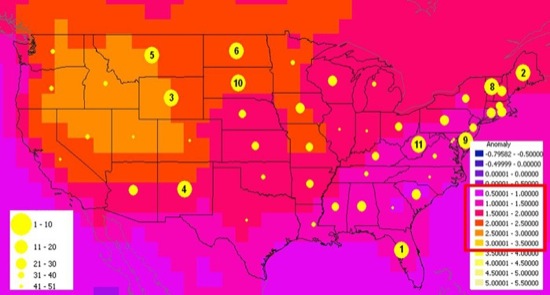 It is up to the user to fully understand the meaning and uncertainties of climate model projections. The data available through the NCAR Climate Change Portal are from one of many GCMs, (i.e., the Community Climate System Model), that contributed to the current understanding of the Earth's Climate System and reported in the Fourth Assessment Report of the Intergovernmental Panel on Climate Change (IPCC). IPCC climate change projections were based on multi-model results from a world-wide climate modeling effort. For further information on the CCSM and the IPCC Fourth Assessment Report, please refer to the NCAR GIS Initiative Climate Change Portal

Other EET chapters that use My World GIS and/or other GIS software include the following:

Other EET chapters that discuss Climate Variability include the following: