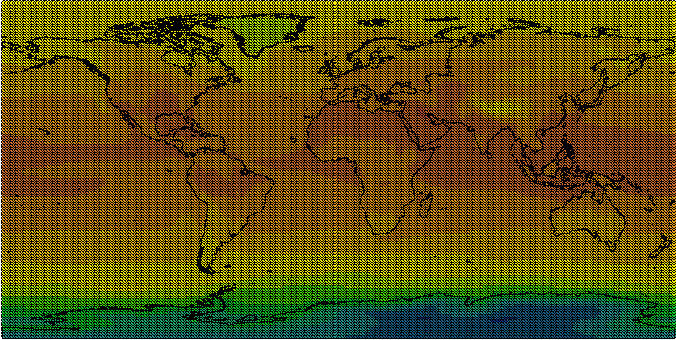 This chapter can be used as a professional development activity or can be assigned directly to students. It is most appropriate for students in grades 10 to 12 or in upper level high school or undergraduate courses.

This EET chapter is based on the work of Michele Thornton and Olga Wilhelmi of the Institute for the Study of Society and Environment, NCAR, Boulder, Colorado and the NCAR GIS Initiative - GIS Climate Change Portal. Their tutorial, Temperature Anomaly GIS Demonstration Project, compares modeled output of a present-day climate simulation with future climate projections. The complete tutorial can be downloaded from the GIS Climate Change Portal ( This site may be offline. )

This chapter only deals with the air temperature anomaly portion of the tutorial. The user is invited to review the complete tutorial for the additional statistical (standard deviation and t-test) analysis.

This chapter demonstrates how to analyze climate projections from a Global Climate Model (GCM) in a Geographic Information System (GIS) using climate datasets generated by the Community Climate System Model (CCSM) for the Intergovernmental Panel on Climate Change (IPCC) 4th Assessment Report. The data is distributed through the NCAR GIS Initiative Climate Change Scenarios portal in a GIS format. Many atmospheric and land variables are available from the CCSM and the GIS Climate Change portal.

Show me more about the datasets used

This is a comparison of the most current climate available from the CCSM runs with an ensemble average, the 20th Century Experiment to the SRES A2 scenario ensemble average for 2030. An ensemble average is composed of many ensemble members or model runs that have been averaged and used for climate projections. This method tends to discriminate between the real climate "signal" and "noise" which is inherent in the internal variability of individual model runs. One of the final outputs in this chapter is an anomaly map of future projected temperature compared to the present-day climate. In climate science, an anomaly is a deviation of a meteorological variable from the normal (mean) value. Determining this anomaly is best accomplished by taking an average over multiple ensemble members, and also by averaging over multiple years within each ensemble average.

In climate models, internal variability in the climate system is expressed both as year-to-year variability and as differences between ensemble members. It is helpful to have a large number of data points included in the average for both the present-day and future climates when computing an anomaly. For this chapter, there are nine ensemble members available for the present-day climate simulation and five ensemble members for the future climate scenario. In order to reduce the year-to-year variability within the ensemble runs, an average was calculated over 20 years using the period from the present-day simulations (1980-1999) and the period from the future scenario (2021-2040). For each year, a mean temperature was calculated for the Northern Hemisphere summer, as a weighted average for June, July, and August.

For purposes of this chapter, it was determined that the final 20 years of the 20th Century Experiment was the most appropriate choice for comparison to the A2 Scenario ensemble average. Initial consideration was given to the Present Day Control Run model run which is also available from the GIS Climate Change Portal. This model run was performed by the CCSM model community to show that the model could obtain a stable and appropriate representation of current climate conditions. However, because the Present Day Control run does not contain multiple initial starting conditions (e.g., ensemble members)so it is difficult to compare its' climate signal to a model run that does have multiple starting conditions (e.g., ensemble average)...

For further information on the CCSM, ensembles, and IPCC SRES scenarios, please refer to the GIS Climate Change Portal


Listed below are four additional sources of information on climate change.

Students who use this chapter will need to be familiar with the following key terms. It is important to stress the difference between Global Warming and Climate Change, as these terms have incorrectly been used interchangeably in most popular media.

This chapter is intended for advanced students of climate change. It can be used as a lab activity or homework assignment. In order for users to grasp the concepts described in the chapter, background reading and discussions should precede the GIS analysis.

Conveying the relationship between increases in mean summer temperatures and the probability of extreme events, such as heat waves, is central to this analysis. Two resources along these lines include the following.

It is important for users to understand that scientific studies demonstrate that even small changes in the mean state of climate can result in the large change in the probability of extreme events (Griffith et al 2005) (Acrobat (PDF) 637kB Jan31 09). By analyzing the anomaly of mean summer temperatures, offered in this chapter, users can identify potential regions at risk to increased probability of extreme heat events.

The Frequently Asked Questions (FAQs) of the IPCC deal with this question of climate change and extreme events as well.

FAQ 10.1 -- Are Extreme Events, Like Heat Waves, Droughts or Floods, Expected to Change as the Earth's Climate Changes?

This chapter uses ESRI's ArcGIS 9.3 software which requires a Windows operating system. ArcGIS 9.3 System Requirements. It is possible to run ArcGIS on a Apple Intel-based computer using emulation software such as Parallels or VMware Fusion.

If your school or institution doesn't already have ArcGIS 9.x installed in your classroom or computer lab, you can request an evaluation DVD from ESRI by filling out the form at Request Evaluation DVD.
Note: It can take from 10-14 business days to receive the evaluation DVD after submitting your request so be sure to plan accordingly.

Using the European Heat Wave as an entry-point into the chapter, the case study introduces this extreme event as one possibility of the increasing mean air temperature in this century.

The following National Technology Foundation Standards are supported by this chapter.

Three to five 60-minute periods are estimated to complete the Case Study and the content in the chapter. However, this chapter can be adapted for decreased time usage in the classroom by downloading the data sets ahead of time, making the objective of the chapter be for users to learn how to calculate an anomaly.

The following shapefiles and/or project files contain all the data layers needed for this chapter.

The most time-consuming steps in this chapter are the calculation of the Summer Air Temperature Averages for both 1980-1999 and 2021-2040 in Part 2. Below are the completed shapefiles for the steps. These can be downloaded and provided to students. Students will still need to calculate the 20-year Average for both these time periods in Steps 3 and 5.

Additional background information on climate change and heat waves can be found at the following links.