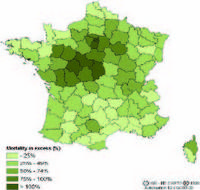 Map of Mortality in France.

Hide
The distribution of excess mortality (death) from 1 to 15 August 2003, by region, compared with the previous three years (INVS, 2003). The darker the green, the greater Mortality in Excess (%).

PARIS(AP) — The death toll in France from August's blistering heat wave has reached nearly 15,000, according to a government-commissioned report released Thursday, surpassing a prior tally by more than 3,000.
Read More...USA Today Sept 25, 2003...

In August of 2003, this headline and many others just like it flashed across the front pages of newspapers and television news stations all over the world. By the end of the August heat wave, it was estimated that up to 35,000 people in France and other European countries had succumbed to heat-related traumas such as dehydration and heat stroke. Human mortality was not the only impact associated with this specific heat wave; ecological impacts such as heat and drought stress on vegetation and the depletion of oxygen in freshwater ecosystems were also recorded. Crop production dropped by nearly 30 percent. Higher air temperatures combined with a decrease in precipitation increased vegetation flammability and wildfires. According to the Intergovernmental Panel on Climate Change (IPCC), additional impacts on the agriculture, industry, and society sectors were also experienced.

Was this just a strange set of circumstances that lead to a once in a lifetime natural disaster or was this a warning about things to come?

The Intergovernmental Panel on Climate Change Assessment Report (IPCC 2007) states that the heat wave experienced in France in August 2003, "resembled simulations by regional climate models of summer temperatures in the latter part of the 21st century..." (p. 845) The IPCC report also states that based on climate change models, "... similarly warm summers may occur at least every second year by the year 2080... [and] effects on ecosystems observed in 2003 provide a conservative analogue of future impacts." (p. 845).

European communities responded to the devastation of 2003 by creating heat health-watch warning systems and increasing their capacity to deal with heat related trauma (IPCC 2007). However, what will the world do if this kind of "weather anomaly" turns into a bi-annual or annual event?

Future Trends in Heat Waves for the United States

Heat waves are an annual event in some parts of the country. In a normal year 175 Americans die from heat-related causes (NWS 2010). In the extreme heat wave of 1980, more than 1,250 people died. Heat waves are predicted to become even more widespread and of longer duration in the future. Recent climate model simulations indicate that year-round temperatures across North America will warm between one and three degrees centigrade (˚C) in the early to mid part of the 21st century (2010 to 2039) while projected annual warming is likely to be 2° to 3°C later in the century (up to 5°C at high latitudes is possible). As these temperatures increase, warm extremes across North America are projected to become both more frequent and longer, especially in urban areas where the combination of pollution, concentrated population, and large areas of pavement contribute to the "urban heat island effect."

Severe heat waves are projected to increase in the 21st century both in magnitude and duration. Some scenarios project a 25 percent annual increase in heat wave frequency in the upper Midwest United States and an increase in total heat-wave days in Southern California from 12 days per year in 2007 to 44-95 days per year in the latter half of the century.

Risks from climate change to human health will be strongly influenced by a number of factors including changes in health care delivery and accessibility, and the aging of the population. The U.S. population is aging and it is estimated that the number of people over the age of 65 will increase slowly until 2010, but will then show a dramatic increase as the baby-boom generation joins the ranks of the elderly. Studies show that this elderly segment of the population is most at risk of dying in heat waves, due to heart conditions and overall weakened health.

The 2003 heat wave in France raised summer temperatures by 3° to 5° C, which is similar to the temperature increase predicted by climate models (IPCC 2007, p. 845) So, what will be the impact of continued heatwaves on the United States during the 21st Century? It is important to understand how the data from climate modeling and GIS technology can be combined to show us a picture of what our future might be.