EarthScope in the Northern Rockies 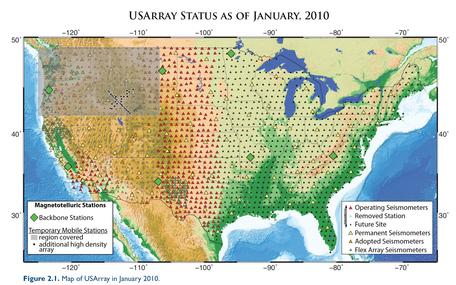 Provenance: Image from EarthScope Science Plan 2010-2020.
Reuse: This item is in the public domain and maybe reused freely without restriction.
EarthScope is an interdisciplinary experiment of unprecedented resolution that will identify links between the surface geology of North America and the forces at work in Earth's interior. EarthScope Workshop Report, 2001
The EarthScope Program provides geoscientists with opportunity to comprehensively study the architecture and composition of Earth, and the processes that contributed to the formation and evolution of the North American continent from crust to core. Funded by the National Science Foundation, Division of Earth Sciences, from 2003-2018, EarthScope is the most ambitious program funded to study the solid Earth. "EarthScope's vision was to use North America as a natural laboratory to gain fundamental insight into how Earth operates. The complexity of geologic processes requires contributions from investigators across the Earth sciences, working both as individuals and as members of multidisciplinary collaborative teams. The goal is to enable and encourage scientists to study Earth in creative new ways, allow innovative ideas to thrive, and ultimately provide new insights into the past, present, and future of the planet we live on" (EarthScope Science Plan 2010-2020).

EarthScope has three major components: USArray which operates the seismic observatory that includes the seismic reference network, the transportable array, the flex array, and the magnetotelluric array that is now operated and maintained by IRIS; the Plate Boundary Observatory, which is hosted by UNAVCO to study geodetics and active crustal deformation; and The San Andreas Fault Observatory at Depth (SAFOD) was a 3.1-kilometer deep borehole drilled directly into the San Andreas Fault midway between San Francisco and Los Angeles, near Parkfield, CA. More complete information about the EarthScope program can be found at the EarthScope National Office. Access to EarthScope Data is available for use by the geoscience research community and the general public.

Pre- and Post- EarthScope Workshops in the Northern Rockies

To address the overarching EarthScope science goals, an interdisciplinary approach is needed that integrates data from geology, geophysics, geochemistry, geochronology, mineral physics, and related disciplines. To facilitate this integrated research, the EarthScope project sponsored a series of regional and topical workshops to develop community consensus on research priorities, opportunities and needs. In the Northern Rockies, two workshops were convened to a) plan for deployment of EarthScope instrumentation in 2005, and b) as a retrospective 14 years later to synthesize research advances made as an outcome of the EarthScope program:

Pre-EarthScope Workshop: EarthScope in the Northern Rockies was convened September 16-18, 2005, at Montana State University, Bozeman MT. The Workshop Program has posted all of the Powerpoint presentations at the workshop, and the final session has posted the summary recommendations from a number of working groups. You may also be interested in the Participant List. Take this opportunity to see what were the compelling research questions and research priorities in anticipation of deployment of EarthScope in the Northern Rockies. Download the Workshop Report and Recommendations (Acrobat (PDF) 1.1MB Dec19 06)

Post-EarthScope "Synthesis" Workshop: a second workshop was convened in January, 2019 (again at Montana State University): Life and Death of a Craton: A 4D EarthScope Perspective on the Role of the Wyoming Craton in the Evolution of North America. The Workshop Program has posted all of the Powerpoint presentations made by the participants, and you can download the Program and Abstracts (Acrobat (PDF) 9.1MB Feb22 19). Based on contributions from the participants, a comprehensive annotated bibliography has been developed, Wyoming Craton References that provides a place to start for future research initiatives, and for use in geoscience course work. Fourteen years later, how did we do? What are the key advances that have been realized as an outcome of the EarthScope program? What unexpected advances have been made? What research goals were not met, or what new research opportunities have been revealed?