Claim, Evidence, Reasoning. One school of thought in science education places great emphasis on fostering students' ability to articulate a claimabout an aspect of the world, back up that claim with evidence, and construct a coherent line of reasoning to show that the evidence does indeed support the claim.

In geology, the evidence often has to do with the timing, or sequence, or rates, of events in the past. Dozens of geologist-lifetimes have been invested in figuring out to constrain what happened at what time in earth history. And then thousands of geologist-lifetimes have been invested in using these techniques to attach dates to bits of rock or mud. Geology students spend entire courses learning to think about dates, times, and ages, via fossils, via magnetic signature of rocks and mud, via stable isotope ratios, via unstable isotope ratios, via geometry of cross-cutting relationships.

So what is the big deal about dates and ages? Why spend so much time and effort on these factoids?

Because, I would argue, temporal evidence supports distinctive and powerful forms of reasoning, which give rise to strong and important claims about process and causality. 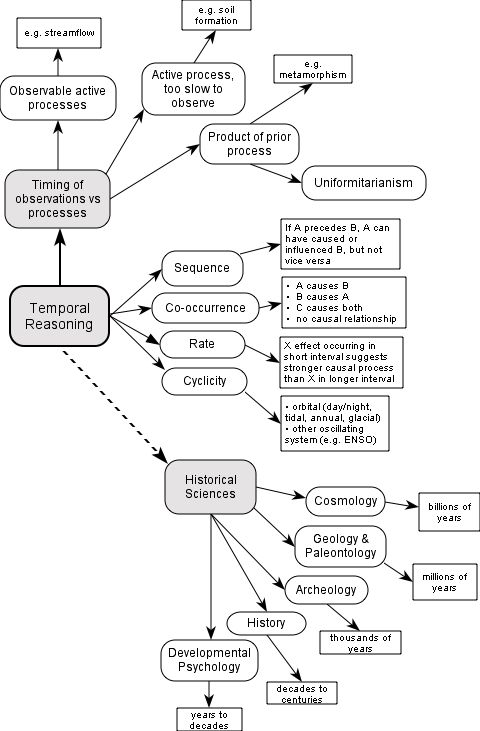 The main cluster of nodes on the temporal reasoning concept map has to do with four kinds of evidence that can lead to at least tentative or partial scientific claims: Sequence, co-occurence, rate, and cyclicity.

Another node of the concept map has to do with the timing of observation versus the causative processes. One's position on this node constrains the types of reasoning that can be assembled to build a chain of reasoning that connects an observable Earth product or structure with the process that caused it. There seem to be three possibilities:

The final node of the concept map sketches a connection between temporal reasoning in geosciences and temporal reasoning in other historical sciences. These disciplines are mapped in order of decreasing timescale: cosmology, geology &amp; paleontology, archeology, history, developmental psychology. One characteristic that all of the historical sciences have in common is that any specific observation or occurence is attributable to a combination of unchanging truths, plus the particular circumstances of the moment, plus historical contingency. For example, when an earthquake shakes a building, the amount of shaking experienced is partly explainable by the universal truths of the physics of wave propagation. And it is partly explainable by the specifics of that fault's motion and the distance from the epicenter to the observation point. But a full explanation also must take into account the tectonic history of the region, which controls how shattered the rocks are along the seismic wave path and thus the wave's attenuation, and the sedimentary history beneath the building, which controls the likelihood of liquifaction. Likewise, to flesh out a full explanation of the causes of the second world war, historians take into account not just universal truths about human nature, and the immediate circumstances of the Axis nations and their individual leaders, but also the historical development that set up the circumstances. To understand a troubled adolescent, a psychologist needs to consider not just the current circumstances, but also the lifelong history of events and influences.

Temporal reasoning does not play much of a role in the parts of chemistry, physics, and life sciences that are typically taught in K-12 education. As a consequence, students often come to us without the expectation that temporal reasoning is part of science. They may use temporal reasoning in their every day lives, reasoning about the behavior of the people around them. They may recognize that such lines of reasoning can be used by historians or archeologists. But they don't consider temporal reasoning to be part of their science tool kit. We are teaching a whole new way of creating and supporting scientific claims--not just a different body of content--from their previous science courses.

Thanks to all of the participants in the journal club discussions on geological time and temporal thinking of the Synthesis of Research on Thinking &amp; Learning in the Geosciences project, especially discussion leaders Cinzia Cervato and Bob Frodeman. Lynn Liben contributed the insight that Developmental Psychology is an historical science, sharing the characteristic that whatever attributes and behaviors you observe at one moment in time are a consequence of the circumstances at the moment layered on top of the lingering impacts of earlier events.

Comment? Start the discussion about Temporal Reasoning in Geosciences