Extrapolating Beyond the Last Data Point

"In most scientific disciplines data is produced, analyzed and interpreted. Extrapolation beyond a data set is more or less forbidden. Geologists, on the other hand, are trained from the outset to understand that they almost never will have enough actual data to arrive at a useful solution except in the most closely controlled three dimensional situations such as mine and reservoir mapping. But this usually involves a level of cost that is only rarely obtainable."

I think this is an interesting point, that extrapolation beyond the last data point is more or less forbidden in science, but geologists do it anyway. 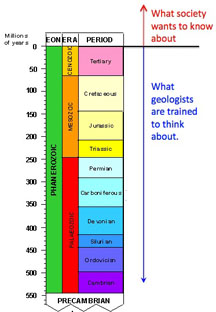 In recent years, though, society has been asking the geoscience community to answer questions about the future, rather than about the past: what will happen to the climate? when will the next earthquake be? etc. To think about the future, by definition, requires making interpretations outside the bounds of the available data, which as Dr. Max noted, is something that many scientists shy away from.

What do we need to do to teach the next generation of geoscientists to be (a) comfortable and (b) competent at thinking rigorously about the future?

Kim: Isn't it the case that post-diction (i.e. telling the story of the past history of the Earth) opens the door for prediction? If the Earth was capable of operating in some well-documented way in the past, why couldn't it do so again? Aren't we better off by knowing something about frequency and magnitude of Earth events like earthquakes, floods, extreme weather, etc. as an appropriate means to make plans to live on, and plan for dealing with, a restless Earth? Perhaps the issue lies in schools of thought that are primarily deterministic compared with much of Earth science which is probablistic.

This post was edited by Sarah Nakamoto on Jan, 12th
[further thoughts from author of post]
Today I took a teacher's question about the early days of plate tectonics to my Lamont-Doherty colleague Walter Pitman, one of the pioneers of the use of seafloor magnetic anomalies for determining rates and directions of plate motion. He got to reminiscing about the paper in which he and colleagues put ages onto magnetic anomalies, shaking his head about how lucky they had been when they took 4 million years worth of magnetic reversals dated from land sections plus a handful of dated seafloor samples and extrapolated boldly out to 80 million years worth of seafloor magnetic anomaly record. Now there is a case of extrapolating beyond the last data point! The extrapolation worked because it wasn't just a blind extrapolation, it was an extrapolation based on a model, and the model, seafloor spreading, turned out to be correct.