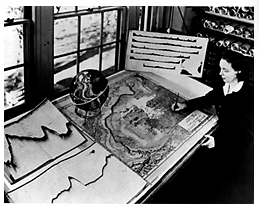 Marie Tharp's workspace with seafloor profiles aligned to facilitate comparing and contrasting multiple "cases." Source.
In a recent post, I wrote about "Case Based Reasoning," a powerful form of learning in which a person compares and contrasts multiple instances of something and extracts a common pattern or thread of insight. Without using that term, Ault (1998) described a very similar process for how geologists extract insight from nature, using the example of deep sea fans. Each fan is a little different from the others, and the essence of deep-sea-fan-ness lies in the aspects they have in common.

This reasoning process is found throughout geosciences. For example, Marie Tharp's discovery of the rift valley of the Mid-Atlantic Ridge came about as she slogged through thousands of kilometers of echo sounder profiles and extracted the common schema of a rift-shaped feature reminiscent of the East African Rift Valley.

It occurs to me that one reason that scientists in some fields burn out more quickly than in other fields could be because some fields use less or more case based reasoning. In geology and anthropology, for example, many researchers remain productive well into their golden years, whereas in physics and math, they tend to burn out early. Geology and anthropology seem to have a lot of case based reasoning. Case based reasoning becomes more and more powerful as the reasoner builds up a larger portfolio of experiences on which to draw. "The best geologist is [the one] who has seen the most rocks" (H.H. Read, 1940). I suppose for cases like Marie Tharp we should add "... or the one who has seen the most data."

Having reached the ripe old age of 57, I have become quite interested in any evidence, or even any theory, about mental processes that become more effective with age.

Marie Tharp's account of mapping and interpreting the Mid-Atlantic Ridge rift valley is recorded in "Connect the Dots: Mapping the Seafloor and Discovering the Mid-ocean Ridge" Chapter 2 in: Lamont-Doherty Earth Observatory of Columbia: Twelve Perspectives on the First Fifty Years 1949-1999, Edited by Laurence Lippsett, online here. The photo of Marie working on her map is from a remembrance of her, published by Lamont-Doherty Earth Observatory upon her death in 2006. The photographer is not credited.

"The best geologist....." quote comes from Herbert Harold Read, a British igneous geologist, Read, H.H., 1957, The Granite Controversy. Geological Addresses Illustrating the History of a Disputant: Interscience Publishers, New York, pp. 430. The context, in the heat of the raging debate over the origin of granite, is described by Davis A. Young in 'Mind over magma, the story of igneous petrology', Princeton_University_Press, 2003. The exact quote, in the sexist language of the day, is "The best geologist is he who has seen the most rocks."

Hi Kim, Thanks for the interesting thoughts about why geoscientists may have more sustained career trajectories compared with scientists in other fields. Here are a few follow-on ideas about why this may be so.

1. The first disticntion follows the work of Robert Frodeman who depicts geoscience as an historical and interpretative science(Frodeman R., 1995, Geological reasoning: geology as an interpretive and historical science: Geological Society of America Bulletin, v. 107, no. 8, p. 960-968)compared with other more experimental sciences that work in relatively closed systems. It simply takes a long career to encounter the natural variation found in Nature, and then to be able to place natural phenomena into some sort of organized framework.

2. This requires an essential professional skill: pattern recognition, as embodied by the work of Marie Tharp.

3. A related skill is "disembedding"--knowing what to look for and what to exclude in looking at complex natural settings. Looking at the same landscape, I focus on the textures and mineralogy of outcrops to discern petrologic process and history (and I ignore the "overburden"), whereas my geomorphologist colleague looks at the landforms that overlie the bedrock to discern landscape evolution. Knowing what to look for and why is an acquired skill, that is dictated by the question at hand.

4. Correlation and comparison: being able to recall similar phenomena from disparate localities, and using the base knowledge from other settings to interpret observations from a new location is intrinsic to geoscience investigations.

5. This also requires the ability to make inferences from incomplete data and engage analagous reasoning, as described in the early writings of G.K. Gilbert and T. Chamberlain. The ability to work with ambiguity, as described in Ault's excellent contributions also plays a significant role--one that requires maturity of thought and experience to be able to discern what is possible, permitted, plausible, or impossible (or at least inconsistent with extant knowledge or theory).

6. I wonder if the experience acquired over a lifetime might otherwise be characterized as "intuition"--a feeling for what must have happened to produce a particular natural phenomena (as per Read's famous quote). A treatise on the importance of intuition in scientific investigations can be found in the biography of Barbara McClintock (winner of the Nobel Prize for her contributions in describing the role of "jumping genes" based on her studies of maize genetics; see the biography by Evelyn Fox Keller, 1984, A Feeling for the Organism: The Life and Work of Barbara McClintock). Is intution simply an expression of acquired knowledge and wisdom acquired over a lifetime of work?

Finally, if these are professional skills that are valued and can only be acquired through professional development during the course of a career, perhaps we should be looking for ways to embed these skills into our coursework so that students can begin to practice them early and often.