I was leading an Earth Science teacher professional development workshop recently, and the subject turned to models: physical models, computer models, data models, mathematical models, graphical models, etc. Afterwards, one of the teachers said to me "Well, it seems like EVERYTHING we use in teaching Earth Science is a model." 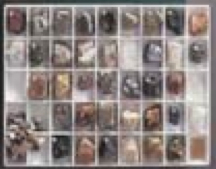 From Ward's Natural Science
But upon further reflection, I think that the rock samples typically used in high school and intro college Earth Sciences are, in fact, models.

A chunk of granite, for example, in one of those rock sample kits used in schools, is a model of granite-ness. It is not presented, and not expected to be understood, as a portion of some specific intrusive magma body that froze in some specific place, at some specific time. It is presented as an exemplar--a model--of the essence of granite-ness. The sandstone sample isn't presented as the product of some specific ancient beach, of some specific age and locality; it is an exemplar--a model--of sandstone-ness. Just as the designer of a concept-driven visualization chooses which of numerous possible configurations will serve as a model of plate boundaries in the textbook illustration, the designer of the classroom rock sample suite decides on one exemplar of each rock type to serve as a model of that category. In the interests of simplicity and clarity, natural variability within each category is ignored.

For a rock to be a sample suitable for research, it has to be surrounded by additional information, metadata, attaching it back to a specific place and context in the Earth's crust. In school rock samples, that connection to the specifics of formative Earth process has been severed.