"What should be the temperature of the ocean?"

I've been thinking a lot recently about Practice 1 of the Next Generation Science Standards (NGSS): Asking Questions (and Defining Problems). As far as I can tell, "Asking Questions" is the least researched of the NGSS practices, and also the least-discussed in terms of practioners' wisdom or pedagogical content knowledge. There seems to be a lot of literature on the questions that teachers ask students, but much less on question that students ask. 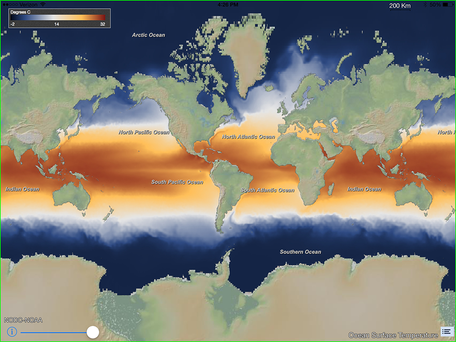 Provenance: Image was provided by Margie Turrin of the PoLAR Climate Change Education Partnership.
Reuse: If you wish to use this item outside this site in ways that exceed fair use (see http://fairuse.stanford.edu/) you must seek permission from its creator.
This line of thought has led me to scrutinize the questions that students ask as as they view visualizations of geoscience data. Here, by far, is my favorite student question to date:
"What should be the temperature of the ocean?"

I find this question interesting from several perspectives:

First of all, this question brings forward the issue that you have to know what is normal or typical or expected in order to be able to make meaning out of a type of data that is new to you. I ran across this problem the first time I collected spatial visualization data. The scores on Piaget's water level task looked terrible to my eye--but I had no real idea what would be typical or should be expected. Likewise, this student probably had no idea what would be expected or normal for sea surface temperature.

Secondly, ocean temperature varies from place and place and changes on many times scales, including time scales that are short relative to the human lifespan. If constrained to present one data visualization to portray "sea surface temperature," how to cope with the dynamic and ever-changing nature of the referent? A snapshot from last week? An average over time? A model output? Which is the most veridical when the object of study is too fast to measure synoptically?

Thirdly, there is the issue of anthropogenic climate change. We've heard extensive debate about how much the temperate of the atmosphere will rise, or should be allowed to rise, under the influence of human-caused greenhouse gas emissions. A parallel question can be asked about the ocean: how much can ocean temperature rise before harming coral, krill and other marine life.

And finally, I have to say that I find the student's wording to be poetic. I would have phrased this question as: "What should the temperature of the ocean be?" The unusual cadence of the student's question strikes my ear as beautiful.

"What should be the temperature of the ocean?" -- Discussion

This is a great question! I have been working on updating my Oceanography course this year and one of my overarching goals is to get the students to ask more questions -- not just of me, but about the material as a whole. It reminded me of this talk a math teacher friend pointed me to a while ago that I just watched again this morning. So I thought I would share it even though it is aimed at younger learners, the idea is the same.
Title: "Ever Wonder What They Would Notice (if only someone would ask)?"
https://www.youtube.com/watch?v=C_DgSWEAUbQ

Hi Katie,
I love the "noticing and wondering" framing that the educator in your math video used with math students. I think this would also work well with geo students (of all ages) looking at data. "Noticing" is what we would traditionally call "observations" and "wondering" is where the fertile ground lies for creating or unearthing what we would traditionally call "interpretations." These friendly, every-day words separate out these two importantly different types of reactions to viewing a new data set. Thanks for sharing this.
Kim

« Should we be talking with our Earth & Environmental Science students about voting?       Lessons Learned from Decades of GeoEd Reform »