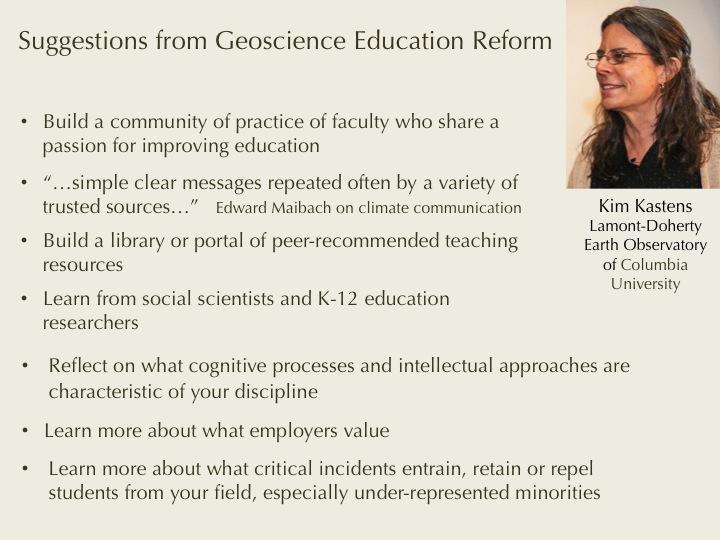 Provenance: Kim Kastens, Lamont-Doherty Earth Observatory
Reuse: This item is offered under a Creative Commons Attribution-NonCommercial-ShareAlike license http://creativecommons.org/licenses/by-nc-sa/3.0/ You may reuse this item for non-commercial purposes as long as you provide attribution and offer any derivative works under a similar license.
I was invited to speak on a panel at the recent workshop on Transforming Post-Secondary Education in Mathematics. No, I haven't suddenly become an expert on math education. The panel was invited to share lessons learned from reform of undergraduate education in other STEM disciplines, and I was there to represent Geosciences.

I was allotted 10 minutes--and one ppt slide-- to convey the essence of what our community has learned in 20 years or more of plugging away at this challenge. With some help from friends, I put together a set of suggestions, which appears below in slightly edited form. I'd be interested to hear what others think have been our lessons learned.

My first suggestion is to Build a community of practice of faculty who share a passion for improving education. A community of practice is a human social structure defined by anthropologists as "a group of people who share a concern or passion for something they do and learn how to do it better as they interact regularly" (Wegner-Trayner & Wegner-Trayner, 2015). In our case, the "shared passion" is for raising up a new generation of young people who understand and appreciate the Earth and environment. The practice that we "learn to do better" is to leverage evidence-based and peer-recommended pedagogical strategies and resources to teach about the Earth. The "interact regularly" part happens at a series of small workshops and larger rendezvous. The most distinctive and long-running workshop series is called "On the Cutting Edge," pioneered by Cathy Manduca, Dave Mogk, Heather Macdonald, and Barb Tewksbury. This program began with a series of discipline-specific workshops such as Teaching Structural Geology in the 21st Century, Teaching Oceanography in the 21st Century and so on. More recently, the InTeGrate project has added workshops on broader challenges that are larger than a single course, challenges that need to be tackled at the department or institutional level, such as preparing your majors for the workforce, and increasing diversity in geoscience. All these workshops share purposeful community-building characteristics: every participant contributes something to the community's knowledge and resource base, for example, an educational resource or a reflective essay. The structure is highly interactive. Carefully selected experts from outside the field give keynote addresses, and the agenda is structured to provide maximum opportunity for the geoscience folks to pick their brains and learn from them. All workshop products, including answers to guiding questions for small group discussions, are captured and archived in web-based workspaces, and major findings are synthesized and web-published, and become part of the community's shared knowledge base. The thing about a well functioning community of practice is that both the individuals and the community ratchet up their capacity for the shared practice, through a set of interlocking reinforcing feedback loops. Every event is structured with the intent that both the participating individuals and the community benefit, grow and learn.

My second suggestion comes from research in climate change communication. Edward Maibach tells us that if you want to change beliefs and behaviors, what is needed is "...simple clear messages repeated often by a variety of trusted sources..." He is writing about changing beliefs and behaviors of the public around climate change, and our topic of today is changing beliefs and behaviors of faculty members around undergraduate education--but I think the advice is still relevant. I think the reason that these geoscience education workshops work so well is that they are populated by what faculty consider to be "trusted sources," which is to say other faculty who teach similar students and similar material and face similar challenges. Education research journals, Deans, and government agencies are not trusted sources for many or most faculty; faculty peers are. As for the "simple clear message, repeated often," here is what I think the message we've been sending has been: Students should be doing, not just listening. As for what they should be doing, they should be doing the things that you yourself do as a scientist: going in the field, collecting and analyzing data, explaining puzzling phenomena, generating hypotheses, communicating and defending their ideas. The 'simple, clear message' continues: if you teach this way, your students will learn more and you will find teaching to be more interesting and rewarding. And the geo-ed community of practice is standing ready to provide you with attractive and adaptable exemplars of this new way of teaching, plus a supportive group of colleagues among whom this new way of doing things is the norm.

My next suggestion is toBuild a library or portal to access peer-recommended teaching resources. We began this with the Digital Library for Earth System Education (DLESE) and the building effort has continued through the Science Education Resource Center, CLEAN, and several other programs. Developing instructional materials that use active pedagogy and authentic data is very time consuming, and geoscience has adopted a divide and conquer approach in which teams of faculty from different institutions with shared expertise and interests collaborate on the development and testing of modules, which are then shared with the rest of the community via a searchable library of instructional resources. 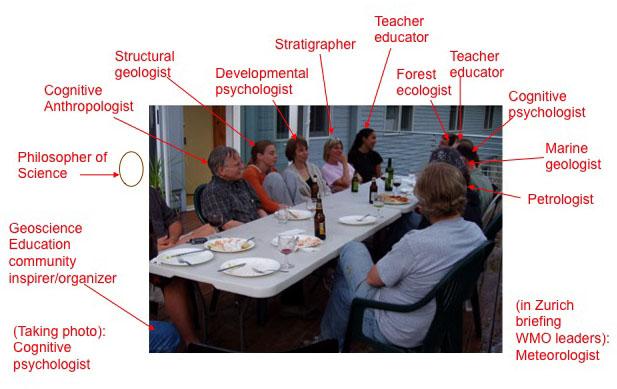 ×
Geoscientists, learning scientists, and cognitive scientists learning from each other during the Synthesis project (photo by Neil Stillings at Black Rock Forest)

Provenance: Photo was taken by Neil Stillings and shared with other members of the Synthesis project for project-related uses. Kim Kastens added the annotations.
Reuse: If you wish to use this item outside this site in ways that exceed fair use (see http://fairuse.stanford.edu/) you must seek permission from its creator.
We have also had very good success in Learning from social scientists and K-12 education researchers. This has happened both through individual collaborations and organized events. I was fortunate to co-lead a project called the Synthesis of Research on Thinking and Learning in the Geosciences. The centerpiece of this project was a 7-day retreat to an isolated research forest, where pairs comprising one geoscientist and one cognitive scientist took a deep dive into thinking and conversing and writing about four of the most puzzling and characteristic aspects of geoscience cognition: spatial thinking, temporal thinking, systems thinking, and learning in the field. This effort led to a book, follow-on workshops, an ongoing blog, and several new collaborations. For such an interdisciplinary information exchange to work optimally, the flow of insight has to go both ways. We geoscience educators obviously benefited from better understanding of our own and our students' thought processes. But the social scientists who have stuck with us the longest have been ones who are learning from us as well, including a psychologist who studies how structural geologists accomplish the mental transformations required to envision folding, faulting, and erosion of bodies of rock, and an anthropologist who studies small group interactions in geology field camps. They learn from us; we learn from them.

Next, would be to Reflect on what cognitive processes and intellectual approaches are unique to or characteristic of your discipline. What is it that students can only learn from you....if they don't get it in your department they might miss it entirely? One example from geosciences would be the distinction between historical sciences and experimental sciences. In experimental sciences, the researcher causes a sequence of events to take place and observes the results. In historical sciences, such as geology, the researcher observes the results but not the causal events, and uses abductive inference to unravel what events are most likely to have caused the observable traces. An entirely different set of intellectual tools and strategies come into play. Students who don't learn about the practices of historical sciences can grow up into adults who dismiss the entire body of paleoclimate evidence of climate change because "well, there was no one there to observe or measure those events that you are making up." In mathematics, your issues will be different, but I'm encouraging you to pinpoint what it is that students will probably not learn unless they learn it from you. We did some of this reflecting among ourselves, but we were also greatly aided by the insights of a few philosophers of science, notably Carol Cleland and Robert Frodeman.

Next suggestion: Learn more about what employers value. The most recent effort in this direction came from Sharon Moser of the University of Texas. Last spring, she and her colleagues convened a workshop of geoscience employers from industry, government and non-profits, and surveyed both employers and academics about what undergraduate majors in our field should be learning. Then she convened another workshop of department heads and chairs, at which the findings about the employers' needs were shared and used as input into planning for changes in the participants' departments. This is important because so many professors have only worked in academia, at least in recent years or decades. They don't necessarily have a clear picture of what knowledge and competencies are required in the diverse range of fields that employ our graduates.

Last suggestion is to Learn more about what critical incidents entrain, retain or repel students from your field, especially under-represented minorities. Most colleagues of my vintage decided to major in geology at least in part because we liked to do outdoorsy things, and we noticed that geology majors got to go on field trips while chemistry and physics majors spent their afternoons in windowless labs. Perhaps it was natural for us to assume that that same attractions would work for today's undergraduates. But we have learned from studies using social science techniques such as critical incident analysis that we were mistaken. For substantial numbers of students in groups underrepresented in science, working with dirt and rocks outside in the sun and rain is exactly the kind of work their parents and grandparents were trying to get away from. That was a wake-up call telling us we needed to understand more about what kinds of events, beliefs, hopes and fears contribute to students either being drawn to or repelled from our field of study.

So that's my list of suggestions. I'm happy to talk further about any of this. In closing, let me say that I have found my work in geoscience education research and reform to be a source of enduring friendships, deep intellectual challenge, and a satisfying sense that I am helping to make the world a better place. I hope the same for you.

One final thought, looking now through the lens of science communications rather than geo-ed reform: I rarely write out the text of my talks. A major exception, though, is when for some reason I won't have slides, as was the case at this conference. Then, I feel a need to write out my text in advance. I don't read the text verbatim, and sometimes I don't even glance at it, but I want to have written it. It seems that either the process of organizing slides or the process of writing sentences can help me organize my thoughts for presentation.

References provided with the talk:

Build a community of practice of colleagues who value and respect good teaching:

Build a library or portal for peer-recommended teaching resources:

Reflect on what cognitive processes and intellectual approaches are characteristic of your discipline:

Learn more about what employers value:

Learn more about what critical incidents in the lives of young people turn them towards or away from your field, especially under-represented minorities

« "What should be the temperature of the ocean?"       Put a Little ART in your eARTh Science »