Should we be talking with our Earth & Environmental Science students about voting?

The New York Times ran a piece recently about how voting turnout differs among undergraduates by field of study. In the last presidential election (2012), education majors had the highest voting rate at 55%. STEM majors had low turnout, with engineers having the lowest voting rate at 35%. Of course I wondered about students majoring in Earth and Environmental Sciences. I tracked down some further information about the study, and found that we aren't included as a category. We'll have to settle for data about physical science majors, who are in the bottom five of the 20 majors reported, with 40% voting turnout.

Twenty-first century elections involve a lot of issues that pertain to human/environment interactions. In Massachusetts where I vote, in just the last few months legislators have taken up issues related to natural gas pipelines, solar energy, plastic bag and bottle bans, and a tax on carbon. In other states, the issues may be different--perhaps fracking, or allocation of water resources--but the overlap between Earth systems, human systems, and the political process remains strong.

Now that teaching about the Earth in the context of societal issues has become more common under the influence of programs such as InTeGrate, should we be engaging our students in discussions about how their growing understanding of Earth Systems can inform their voting and other forms of political engagement? It seems to me that as science educators we should not be stating or recommending how to vote. But we could ethically encourage voting, and we could call attention to political action as one of the multiple ways that students can make use of the insights and understandings that we are helping them construct. What do you think? 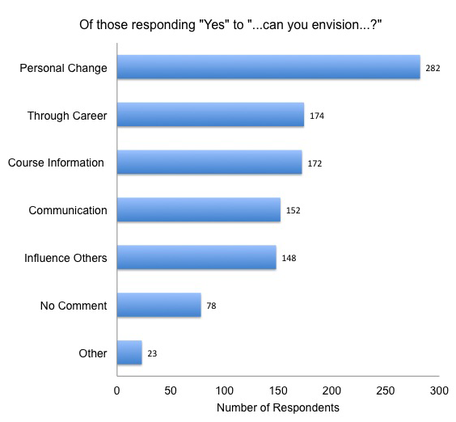 ×
InTeGrate student responses: How they can envision using what they learned in this class...

Provenance: Kim Kastens, Lamont-Doherty Earth Observatory
Reuse: This item is offered under a Creative Commons Attribution-NonCommercial-ShareAlike license http://creativecommons.org/licenses/by-nc-sa/3.0/ You may reuse this item for non-commercial purposes as long as you provide attribution and offer any derivative works under a similar license.
We do have some evidence suggesting that existing instruction--at least some existing instruction--is not making this point. The InTeGrate project has students fill out an attitudinal survey at the beginning and end of a course in which they have been taught with InTeGrate curriculum materials. One of the post-instruction items asks: "As you think about your future, can you envision using what you have learned in this course to help society overcome problems of environmental degradation, natural resources limitations, or other environmental issues?" A strong majority (82%) of students respond "Yes."

But then they are asked, "If yes, how?" Very few of the students write anything related to voting, or influencing public policy, or government decision-making of any sort. The most common categories of answers have to do with taking action in one's personal life (e.g. "I would like to grow some of my own food and I am very pro recycling") or one's professional life (e.g. "Being a industrial designer, my priority is to design the product that can help us to protect the planet Earth"). In addition, large numbers of students recalled some piece of information they had learned from the course without stating a future action they might take, conveyed that they would communicate with others about environmental issues (e.g. "I can help society overcome its problems by telling everyone the dangers and to give them a heads up on what is good and bad and hopefully it can be for the greater good"), or conveyed that they would try to influence others to take action (e.g. " I can try to persuade my employer to make changes to the company to be environmentally sustainable").

Since voting or other forms of political engagement was not prominent enough in the data to rate its own coding category, I went back to the raw data to see what I could find. Of the 847 responses, only 16 said anything related in any way to government. One mentioned voting: "If there was ever a vote on whether or not we should mine mid-ocean ridges, I will be able to make a more educated decision on the topic. It may be rich in resources but it is also important to the life that lives around it." One mentioned another form of citizen action: "Go to city counsel meeting to help plan and zone areas that are less likely to be vulnerable." Four mentioned action through a job in government, e.g. "I want to be an extension agent. I can teach people what I have learned from this course and put it into practice." Among the sixteen, the most common government-related response (7 respondents) seemed to be communicating with government officials through informal or side-door pathways, e.g. "Through lobbying for more incentives to encourage renewable energy and more regulations against fossil fuels."

Look out across the faces in your 100 student course. Statistically speaking, 55 to 60 of those students will not vote in the next election. Is that OK? Is that influenceable by us?

Should we be talking with our Earth & Environmental Science students about voting? -- Discussion

This is a great topic for discussion. In my Global Environment course (linked above), we start the semester by discussing four approaches I feel students need to consider when examining environmental issues: science, economics, ethics, and politics. Once those approaches are laid out, we use them as we discuss issues including population size, food supplies, energy use, and global warming.

In election years, the class develops a list of three questions and does research to determine candidates positions on those questions. Each students is assigned one candidate (All levels from President down to state rep.) and reports their findings back to the class. Students use the internet, but most also call or email the campaign (or candidate) looking for direct responses. On several occasions, candidates have visited the class and answered students questions directly.

I developed the election year project to address something I had discovered anecdotally: many students do not vote because they feel ignorant about the candidates and issues. The election process give students experience and information on many of the candidates they will see on their ballots.

« In which I experience the power of the right question       "What should be the temperature of the ocean?" »